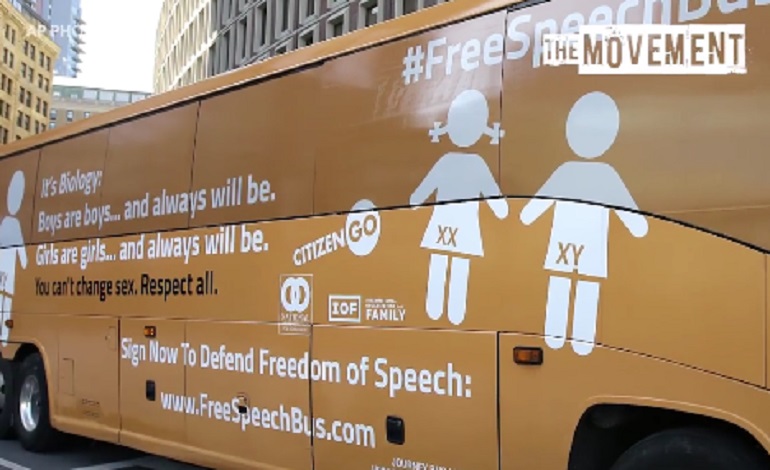 A bus has been travelling across the US encouraging transphobic hate. Its slogan is “Boys and boys… Girls are girls… And always will be”. But people have come out to stop the bus in its tracks.

The bus was organised by anti-LGBTQ+ group CitizenGO. It claims to promote “Christian values”, along with free speech and choice. But its bus appears to be less about tolerance and more about inciting hate:

Another slogan on the bus says: “You can’t change sex. Respect all.” And its hashtag is claiming to protect freedom of speech.

The bus has met with protests in a number of US cities. One transgender protester from Boston said:

It assumes that our identities are the sum of what’s between our legs… I’d argue that it’s more about our lived experiences and our genders. Biology gives us what we are born with, but it doesn’t make us who we are.

Facebook users were also dismayed by the bus, saying:

Land of the free?

Just recently, US President Donald Trump reneged on a law passed by Barack Obama; which had allowed transgender students to have access to the bathroom of their gender at colleges and universities. And as The Guardian reported, lawmakers in South Dakota considered a bill to give adoption workers broad authority to deny adoptions to LGBT parents. Also, Oklahoma considered legislation permitting discrimination against gay and trans people by adoption agencies and private businesses.

The US is behind much of the world with its transgender laws. In India, for example, transgender people and those classified as ‘third gender’ have the right to self-identify without sex reassignment surgery. And according to Transgender Europe, Denmark and Argentina are the most progressive countries. In the US, meanwhile, 27 transgender people died in 2016.

To say it calls itself the ‘Land of the Free’, the US has a long way to go with transgender equality. And the thinking behind this disgraceful bus embodies the US government’s attitude towards those who just want the right to be themselves.