The world seems to have conveniently forgotten about the Panama Papers. That's bad for us all. - Canary 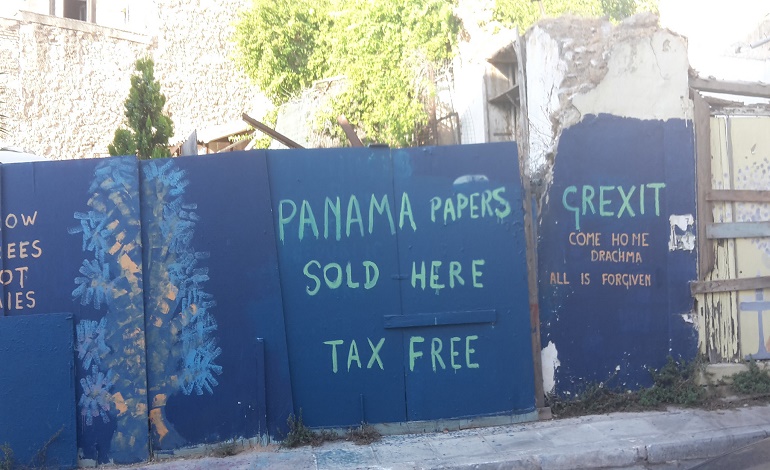 The ‘Panama Papers‘ scandal was one of the biggest data leaks in history. But a year on from the exposé by the International Consortium of Investigative Journalists (ICIJ), it appears to be simply ‘business as usual’; as few governments have meaningfully tackled the issues of tax avoidance and evasion.

The leak was huge. It contained 11.5 million documents, and named more than 200,000 companies, 14,153 clients in over 200 countries, and 143 politicians. At the time, The Guardian hailed it as revealing “how the powerful exploit secretive tax regimes – and widen the gulf between rich and poor”, saying it was “offshore pandemonium”.

The battle against corruption will not be won overnight. It will take time, courage and determination to deliver the reforms that are necessary. But we cannot hope to solve the major global challenges we face without tackling the exploitation, fraud and dishonesty at their heart.

79 countries have launched at least 150 inquiries, audits or investigations into cases exposed by the Panama Papers. Pierre Moscovici, the EU’s Economics Commissioner, said the leak has prompted “transparency” and a “fight about justice”:

Every euro that a multinational company fails to pay is a euro too many paid by households. It’s unacceptable.

But so far, it appears that little has changed.

As Oxfam has reported, the UK became the first country to establish a Public Register of Beneficial Ownership in June 2016. A list which essentially shows who really owns the companies that carry out offshore tax avoidance; as people often hide their identities behind layers of different companies. This is, however, the only real thing that the Panama Papers has changed in the UK.

Overseas Territories and Crown Dependencies (places like Bermuda where tax avoidance is rife) now have to collect information on companies and their owners registered in their jurisdictions. But these territories only have to share the information with UK authorities. Not the general public. Meaning that any investigations by the likes of the ICIJ into these would be near-impossible.

The UK government also has the power now to implement so-called ‘Country-by-Country reporting’; whereby companies are compelled (but not forced) to tell HM Revenue and Customs of every place outside the UK where they operate. But so far, no country has implemented this. So the UK government writing it into law is utterly pointless.

Tax avoidance and evasion is one of the biggest issues facing the planet. The UK ‘tax gap‘ (the difference between what should be paid, and what actually is) is up to £119bn a year. And globally, it’s estimated to be at least $1.1tn. This amount of money has the biggest impact on ‘developing’ countries, which lost $7.8tn in money they were entitled to between 2004 and 2013.

Meanwhile, multinational corporations like Chevron are laughing. The oil and gas giant is the 33rd most powerful company on the planet. It has yearly revenues in excess of $200bn and profits of more than $20bn. But it also avoids tax like the plague. Out of Bermuda alone, the company runs 264 subsidiaries, mostly operating with the purpose of reducing the company’s tax bill.

It’s not only planes that vanish…

And Bermuda itself is an intrinsic part of the tax problem. Ethical Consumer has ranked it 12th on its list of the 45 most secretive tax havens. The UN, meanwhile, ranked it fifth on its list of richest countries by nominal Gross Domestic Product (GDP) per capita in 2014. With a population of just 65,024 but a GDP of $5.6bn, this means each person is worth $89,795. Also, Bermuda has a register of around 20,000 companies (making $94bn profit), the equivalent of nearly 0.3 companies per resident. And this is where the money is made.

The list of companies which operate out of the 20 square-mile territory includes Adobe, AIG and AXA, Barclays and British Airways and Buena Vista; Fujitsu, GlaxoSmithKline, Goldman Sachs and JP Morgan; Microsoft, Nestle, Nike, QVC and Talk Talk. Name a multinational, and it probably operates out of Bermuda.

And the island is a microcosm of where the tax problem lies. Because, ultimately, these multinationals which dodge tax via countries like Bermuda effectively run the planet.

There are, according to research by one Swiss university, 43,000 companies that the Organisation for Economic Co-operation and Development (OECD) defines as “transnational”. The majority of shares in these corporations are owned by the richest 1,318 of these 43,000 companies. Of the 1,318 companies, 737 control 80% of them and, at the very top, 147 control 40% of the 737. And the top ten biggest and most powerful companies, running all the other ones, include British names like Barclays, Legal and General, and Lloyds Banking Group.

As I wrote last year for Consented:

Do we think that these 147 companies are going to stop serving the interests of a few individuals and start playing fair, even if the avenue of tax havens is partially closed off? People and companies can be exposed as much as we want. Names can be named. Corporations can claim to be trying to clean up their act. But the truth of the matter is that when you have a few companies and people controlling all of the world’s wealth, there is always going to be one thing at the forefront of their minds: greed.

To think that David Cameron and Barack Obama will do more than just tinker around the edges of this… is naïve in the extreme. Both countries’ whole economies rely on the kind of practices exposed in the Panama Papers for their stability.

I concluded by saying the Panama Papers “will end up being just another exercise in conveniently apportioning blame at the doors of others, to attempt to counteract a growing swell of public disdain at the state of our current global financial system”. And sadly, judging by the ‘progress’, or lack of it, that’s been made in a year – the Panama Papers haven’t changed anything.

– Read more from The Canary on the Panama Papers.