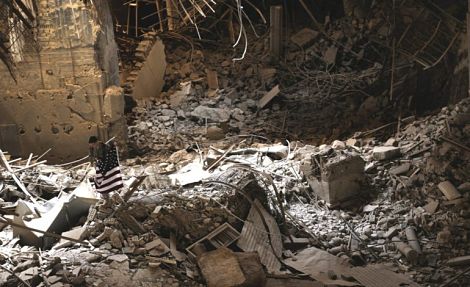 Just as US politicians were openly speaking about prioritising the fight against Daesh (Isis/Isil) over the removal of Syrian President Bashar al-Assad, disaster hit. Dozens of civilians reportedly died in a chemical attack. And politicians quickly changed their stance, blaming Assad and pushing for a strong response. But in their hasty responses, mainstream media outlets let us all down. Badly.

On 30 March, US Ambassador to the UN Nikki Haley insisted that the US was no longer prioritising the removal of Assad. And Secretary of State Rex Tillerson said the US would allow the Syrian people to decide Assad’s future. This was no doubt good news for the Syrian leader.

But then, on 4 April, at least 70 people died in a suspected chemical attack in a rebel-held town in north-western Syria. The anti-Assad opposition and Western powers claimed the Syrian government was responsible.

The UN, however, stressed that it was “currently not in a position to independently verify” reports of chemical weapon usage in Syria. The Syrian government, meanwhile, denied responsibility for the attack. And its Russian allies claimed a government shell had hit a building where the anti-Assad opposition was producing chemical weapons. An accusation the rebels in turn denied.

Despite the difficulty of verifying details about the attack, though, US politicians and mainstream media outlets had no problem jumping the gun.

The response from the media and the Trump Administration

Headlines varied from Worst Chemical Attack in Years in Syria; U.S. Blames Assad (The New York Times) to Assad gasses kids with SARIN (The Daily Mail). But considering that there are few Western journalists on the ground in Syria, media outlets largely relied on potentially biased local sources. And by echoing uncorroborated allegations about Assad’s responsibility for the disaster, the media essentially egged on politicians who were already eager for more war.

Rex Tillerson quickly changed his tune on Assad. And Nikki Haley hinted at unilateral US action in Syria. Echoing the build-up to the 2003 invasion of Iraq, she insisted:

When the United Nations consistently fails in its duty to act collectively, there are times in the life of states that we are compelled to take our own action.

Trump, meanwhile, said that such “heinous actions by the Assad regime cannot be tolerated”. He also insisted that his attitude on Syria and Assad had “changed very much”.

And although the BBC rightly said that “rhetoric has got way ahead of policy” in the US – insisting on the need for “a genuine strategic view for Syria’s future, not just a tactical response”, many mainstream media outlets chose to give airtime to the very people pushing for such a knee-jerk ‘tactical response’.

A platform for warmongers

Media outlets gave a platform to people like Republican Senator Marco Rubio, for example. Rubio suggested that the Trump Administration’s comments about not prioritising the overthrow of Assad had effectively given the Syrian government a green light to launch indiscriminate attacks. Former Republican presidential candidate John McCain was another to blame Trump’s leniency.

Democrats also worked on the assumption that Assad had been responsible for the 4 April disaster. And one Democratic senator even said the US should “go after” Assad.

There was less of a platform, meanwhile, for people who might have pointed out that human rights organisations have accused both the Syrian regime and its opponents of war crimes and “indiscriminate attacks”; or for people noting how Western powers had helped to escalate the Syrian conflict in the first place, even though intelligence agencies apparently knew that extreme Salafi/Wahhabi groups like al-Qaeda were “the major forces driving the insurgency” from early on.

Multi-award winning journalist Robert Fisk highlighted this kind of media bias during the final battle for Aleppo in December 2016, emphasising how:

a powerful tale of heroism, democracy and suffering was being woven for us, a narrative of good guys versus bad guys as explosive and dishonest as “weapons of mass destruction”.

There were dissenting voices in the wake of the 4 April attack, though. On the internet. Former anti-war congressman Ron Paul, for example, questioned assumptions about Assad’s responsibility, saying:

Who would benefit? … It doesn’t make any sense for Assad, under these conditions, to all of a sudden use poisoned gases… I think it’s zero chance that he would have done this deliberately.

And a number of Twitter commentators echoed that point, urging caution:

Why would Assad use sarin after so publicly pledging to have gotten rid of it? Is he that stupid or is there another possibility?

This is the obvious question. While anything is possible in this disgusting war, motives are priority to evaluate, alongside other evidence. https://t.co/vBeD41AVKQ

So after Assad receives a huge diplomatic victory (Tillerson's recent comments), he decides to use Sarin? That just doesn't add up.

Twitter users also pointed out the hypocrisy of some ‘liberal’ Trump critics now seemingly pushing him to go to war in Syria:

Agree with this 1000%. The same people saying Trump & associates are insane, evil & inept now want him to militarily intervene in Syria. https://t.co/aqWcxSI0oy

This is insane. He's an unstable person and you want him to start another war. Listen to yourselves. pic.twitter.com/pA18fofUKG

I don't support Assad. I despise him. But I love the Syrian people. And they don't deserve what the West seems to be planning for them.

Another imperialist war sugarcoated as liberation will lead to #Syria becoming a Salafi jihadist black hole in the heart of the Middle East.

Others, meanwhile, pointed out that US-led air strikes have reportedly killed hundreds of civilians in Iraq and Syria in recent weeks. And Airwars, which tracks allegations of civilian deaths, believes that up to 3,214 “civilian non-combatants” may have died so far in coalition air strikes. But we shouldn’t expect quite as much sabre-rattling or wall-to-wall coverage about that any time soon.

The real solution to the war in Syria

14 years have now passed since the invasion of Iraq – which caused hundreds of thousands of Iraqi deaths, brought chaos to the region, and put a rocket booster under global terrorism. Yet it seems that war hawks and arms companies – the biggest beneficiaries of the Syrian conflict – are again pushing for a similar intervention in Syria.

But history suggests the exact opposite is necessary. As Jeffrey D. Sachs from the UN Sustainable Development Solutions Network wrote recently:

It’s time to end US military engagements in the Middle East. Drones, special operations, CIA arms supplies, military advisers, aerial bombings — the whole nine yards… [We need] political solutions rather than imperial oppression, war, and the terror that comes in its wake… The real solutions to these conflicts lie in diplomacy and political justice… It’s time to let the locals sort out their problems, supported by the good offices of the United Nations, including peacekeeping and peace-building efforts.

We are at the 100th anniversary of British and French imperial rule in the Mideast. The United States has unwisely prolonged the misery and blunders. One hundred years is enough.

Back in 2003, the mainstream media and liberal interventionists facilitated the invasion of Iraq. And it looks like they’re doing it again now; letting us all down badly by giving warmongers a platform to spread their destructive message.

Today, rather than another disastrous Western invasion in the Middle East, how about putting the innocent people caught in the middle first? How about learning from past errors and addressing the root causes of the Syrian conflict rather than diving into another yet another quagmire?

– Read more Canary articles on Syria. And learn more about Rojava – the democratic and multicultural Syrian region which supports neither Assad nor his jihadi-led opponents. Visit our Facebook and Twitter pages for more international coverage.