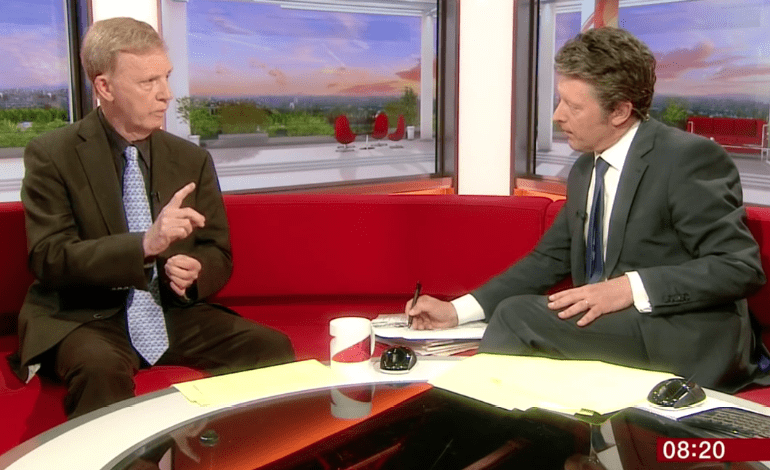 A former UK ambassador to Syria forced the BBC to face the truth about Donald Trump’s airstrikes. Peter Ford argues that we don’t yet know whether Syrian President Bashar al-Assad used chemical weapons on civilians. We have no evidence either way.

The US claims Assad carried out a chemical attack on his people on 4 April. Without congressional approval, Donald Trump launched 59 tomahawk missiles against Assad’s government in Syria. The US President says the missiles were a response to the disaster.

Any decision of this magnitude should be based on evidence, not impulse. But the ex UK ambassador pointed out that we don’t know what happened. We have the US and Russian versions of events, but no evidence either way. His position chimes with the UN special envoy for Syria’s. Staffan de Mistura said “we have not yet any official or reliable confirmation” of who was responsible.

Assad may be cruel, brutal but he’s not mad. It defies belief that he would bring this all on his head for no military advantage… It would anger the Russians

The disaster hit just as US officials were openly talking about prioritising the removal of Daesh (Isis/Isil) over regime change. That represents a big diplomatic win for Assad. So Ford questions why the Syrian President would want to risk such a political gain by attacking his civilians, rather than his opponents on the battlefield. Ford claimed that US intelligence officials arguing Assad did carry out the attack have an “agenda”.

Trump’s bombing is the first time the US has directly and intentionally attacked the Assad regime, but reportedly the 7,899th US strike in Syria. Ford argued Trump’s bombs made it not less, but more likely that chemical weapons would be used:

Trump has just given the jihadis a thousand reasons to stage fake flag operations. Seeing how successful and how easy it is, with a gullible media, to provoke the West into intemperate reactions.

Ford was the UK ambassador to Damascus from 2003-2006. After Trump’s airstrikes, Daesh seized on the opportunity and launched an offensive against the Syrian government. Meanwhile, Alternet reports that Western military intervention is the “only hope” for the Al-Qaeda-allied rebels.

Given there is no evidence that Assad carried out the attack, the universal approval for military intervention from our political and media class is concerning. Based on impulse and without evidence, Trump bombed a sovereign nation allied with Russia before even knowing the details of the chemical disaster. And the ‘liberal’ media went from challenging his impulsivity on a number of important issues to unequivocal support. Cutting through the sabre-rattling pundits, Ford’s sober intervention on the BBC is a welcome dose of reality.

– Fight back against establishment warmongering. Join the media revolution by supporting independent news outlets which seek to hold the powerful to account: