While the US and Britain ramp up the war rhetoric, the White House is undergoing a coup [OPINION] - Canary Workers’ Co-op 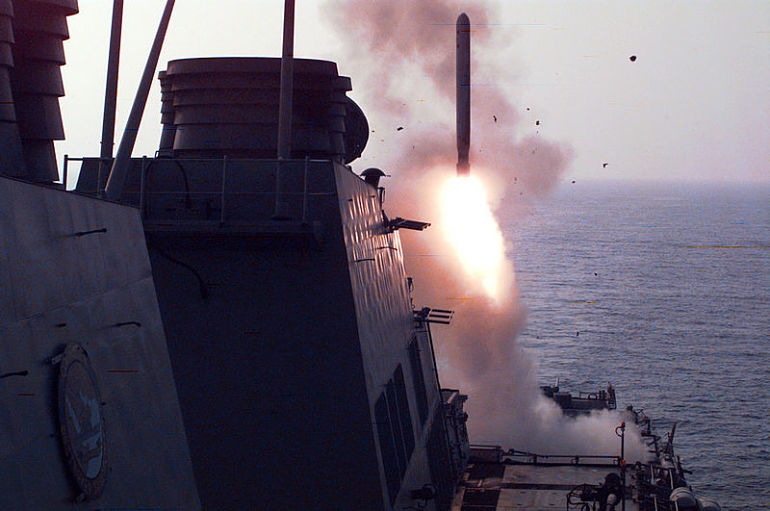 The US and Russia could be on the brink of war. A real war, as opposed to the proxy war fought in Syria over the last four years. And Britain could be dragged into the conflict too. But there is another war taking place – a political war. Because moves to purge ‘an inner sanctum’ power base at the heart of the White House appear underway. These manoeuvres might explain US President Donald Trump’s sudden shift to an interventionist foreign policy.

The eastern Mediterranean is now a potential war zone. With US destroyers USS Porter and USS Ross armed with cruise missiles and Russian frigate ‘Admiral Grigorovich’ similarly armed. And at RAF Akrotiri, Cyprus, 16 Tornado and Typhoon fighter aircraft are on standby, as part of Operation Shader. In addition, a British nuclear submarine is not far off the Syrian coast. And the US has ordered an aircraft carrier and several other warships toward the Korean Peninsula.

This comes after a second wave of air strikes by the Assad regime on Khan Sheikhoun.

Britain is already providing logistical and other support to anti-Daesh (Isis/Isil) operations in Syria. So it’s not unfeasible that ‘mission creep’ could see Britain engage against the Syrian regime too. That’s with or without the approval of the British parliament.

Though diplomatic interventions at the UN or other bodies could see a peaceful solution prevail. And in contrast to the more hawkish Fallon, British Foreign Secretary Boris Johnson emphasised:

My priority is now to continue contact with the US and others in the run-up to the G7 meeting on 10-11 April – to build coordinated international support for a ceasefire on the ground and an intensified political process.

Responsibility for the chemical attack

The US attack on a Syrian air force base was in response to the dreadful carnage that saw scores of men, women and children die or injured from the nerve gas.

Russia and Syria deny all responsibility for the chemical attack. However, a Guardian reporter visited Khan Sheikhoun and the building storing the chemicals. Her photos appear to show no signs that planes had bombed the building. Independent verification is clearly required.

But Trump has other concerns.

Allegations that Trump’s strategic adviser Steve Bannon was planning to further consolidate Trump’s power base began to circulate in February.

And over the last few weeks, Trump’s son-in-law and director of the White House Office of Innovation Jared Kushner, together with Bannon, has been busy setting up the Strategic Initiatives Group think tank. This complements Trump’s  ‘Beach head’ team of around 400 advisers.

It was recently revealed that Kushner had failed to disclose his contacts with foreign leaders or officials. These allegedly include a December 2016 meeting with the Russian ambassador, Sergey I. Kislyak. And one with the head of a Russian state-owned bank, Vnesheconombank, arranged at Mr. Kislyak’s behest.

Also Devin Nunes temporarily quit as chair of the prestigious House Intelligence Committee. This follows his decision to present sensitive intelligence to Trump before consulting with his committee.

Separately, there are allegations that former head of private security firm Blackwater, Erik Prince, played a key role in facilitating a back channel between Trump associates and Russia. The FBI is now investigating his January 2017 meeting in the Seychelles as part of the broader probe into alleged Russian interference in the 2016 US election.

‘Apprentice’ 1: Flynn: Retired Major General Michael Flynn was the former director of the Defense Intelligence Agency. He resigned as the National Security Council head after The Washington Post reported he had misled Vice President Mike Pence and others about the true nature of his contacts with Russian Ambassador Sergey Kislyak. There have also been allegations that Flynn was working for Turkey.

‘Apprentice’ 3: McFarland: Now deputy national security adviser KT McFarland is to step down to become US ambassador to Singapore,

And the escalating situation in Syria would undoubtedly prove a welcome diversion. For Trump, from the ongoing ‘RussiaGate’ inquiries. And for British Prime Minister Theresa May, from ongoing revelations about her disastrous Brexit policies.

The dynamics in the White House are clearly changing. And at a time when the US and Russia appear to be rekindling the Cold War. In essence, it’s all about pro and anti US-Russia detente. But how things will eventually play out in the White House – and in Syria – is anyone’s guess.

As the second Iraq war showed, outcomes of conflict are highly unpredictable. And if this current conflict escalates further, the region as a whole will be affected, putting even more lives at risk.

– Read The Canary‘s previous articles on Turkey and Donald Trump.