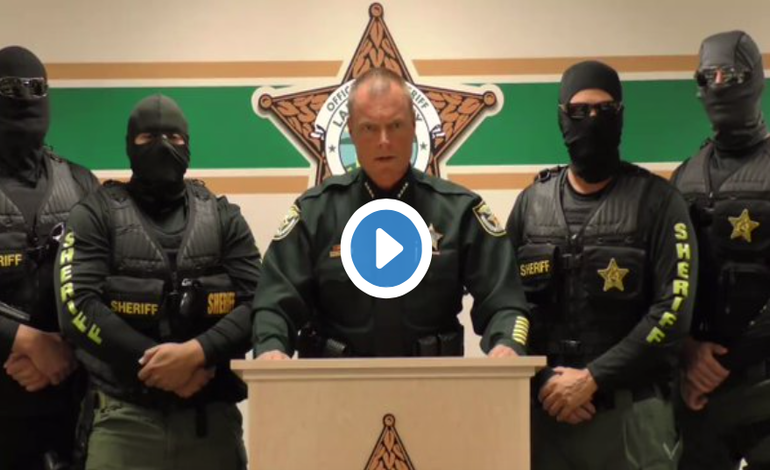 A 90-second public service announcement (PSA) by the community engagement team of the Lake County Sheriff’s office in Florida has shocked the world. Looking more like the video of a terrorist group than law enforcement, the officers in it wear face-coverings and issue bizarre threats.

The footage begins with Lake County Sheriff Peyton C Grinnell at a microphone, press conference style. Four deputies in black SWAT-like gear flank him. All four have their faces covered with black balaclavas, and three are wearing black sunglasses to cover their eyes. Their arms are crossed.

Throughout the footage, Sheriff Grinnell is the only officer to be identified, or to speak. He also issues a bizarre threat to drug dealers in the area, who he calls “the pushers of poison”, stating:

Enjoy looking over your shoulder constantly wondering if today’s the day we come for you. Enjoy trying to sleep tonight, wondering if tonight’s the night our SWAT team blows your front door off the hinges. We are coming for you.

A heroin PSA normally focuses on warning of the dangers of drug use, and driving heroin users toward support. They should be safe to show to kids. Officers of the local Sheriff’s office should not play dress-up and impersonate Navy Seals.

The bellicose presidency of Donald Trump is exacerbating an issue that has plagued America for some time. The militarisation of the police.

Sheriff Grinnell’s threat of night-time SWAT raids recalls such a raid from Detroit. Around midnight on 16 May 2010, seven-year-old Aiyana Stanley-Jones was asleep in her grandma’s arms, at home on the couch. A police raid stormed the house. Officers discharged a flash-bang grenade in the lounge, releasing a blinding light and deafening explosion. As smoke filled the room, an officer shot Aiyana through the neck, killing her.

The SWAT raid was being filmed for a reality TV show. And they had stormed the wrong house.

This was essentially a military assault on a private dwelling.

A court later cleared the officer of all charges.

In its latest investigation on the issue, the American Civil Liberties Union states:

All across the country, heavily armed SWAT teams are raiding people’s homes in the middle of the night, often just to search for drugs. It should enrage us that people have needlessly died during these raids, that pets have been shot, and that homes have been ravaged.

Our neighborhoods are not warzones, and police officers should not be treating us like wartime enemies. And yet, every year, billions of dollars’ worth of military equipment flows from the federal government to state and local police departments. Departments use these wartime weapons in everyday policing, especially to fight the wasteful and failed drug war, which has unfairly targeted people of color.

The danger is that with new Attorney General Jeff Sessions being an on-the-record racist, this is unlikely to change anytime soon.