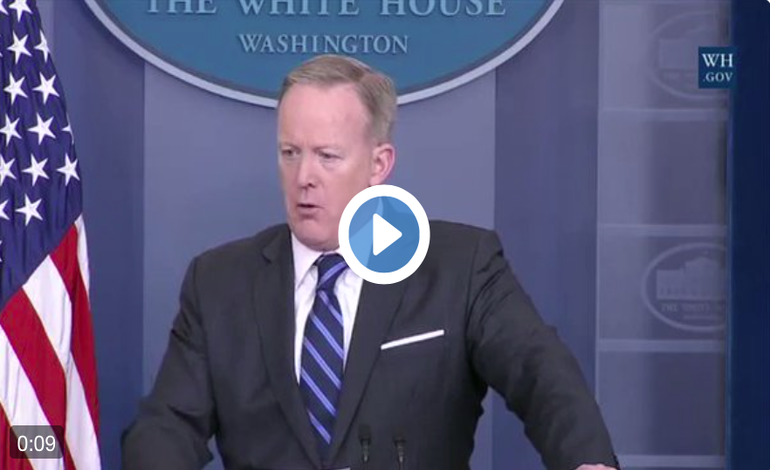 White House press secretary Sean Spicer slipped up during a press conference this week. And in doing so, revealed the real reason for US airstrikes on Syria is “to destabilise the country”.

The comments of the White House press secretary

Sean Spicer was giving his daily press conference in which the White House press pack grills the press secretary on current issues. The airstrikes were top of the agenda for the largely supportive press corps. Asked for the mission goals, Spicer told the assembled journalists:

The goal for the United States is two-fold as I’ve stated. It’s one, to make sure that we destabilise Syria. Um, destabilise the conflict there.

Okey so this just happened!
White house press secretary slips and tells the real reason the #US is attacking #Syria. pic.twitter.com/JnqF82WiDm

The comments were absent from the later reports from the White House press pack. But viewers watching the press conference at home didn’t miss the significance of the gaffe.

Whoops! Sean Spicer slips up & admits today why the US REALLY struck Syria: "The goal for the US is to make sure that we destabilize #Syria" pic.twitter.com/3Il7lfCuQL

#Spicer's tongue slips & let's a cat out the bag, when he inadvertently says USA's goal is to 'destabilise' #Syria. https://t.co/kx3aVU0TmK

Just in case anyone missed it Sean Spicer confirmed US is seeking to destabilise #Syria https://t.co/7hPBzLH6Bm

Donald Trump’s decision to strike Syria has received almost universal approval from both the media and political class at home and abroad. But experts closer to the ground have expressed serious concern about the impulsiveness and potential consequences of the strikes.

The former UK ambassador to Syria, Peter Ford, told the BBC that the US President had acted without the necessary evidence, saying:

Assad may be cruel, brutal but he’s not mad. It defies belief that he would bring this all on his head for no military advantage… It would anger the Russians

Trump has just given the jihadis a thousand reasons to stage fake flag operations. Seeing how successful and how easy it is, with a gullible media, to provoke the West into intemperate reactions.

UN special envoy to Syria, Staffan de Mistura agrees. Mr de Mistura has stated that “we have not yet any official or reliable confirmation” of who was responsible for the chemical attacks which prompted the US airstrikes.

What is clear about the Syrian conflict is that it is a complex powder keg scenario. Multiple interest groups are in conflict, and this now includes two global superpowers. The devastating impact on the civilians caught in the middle is a humanitarian disaster. It is a time for cool heads, and for honest brokers to engage in considered multi-lateral efforts at peace. So far, none of the parties involved can claim to be fulfilling this most critical role.

– Read more on Syria from The Canary