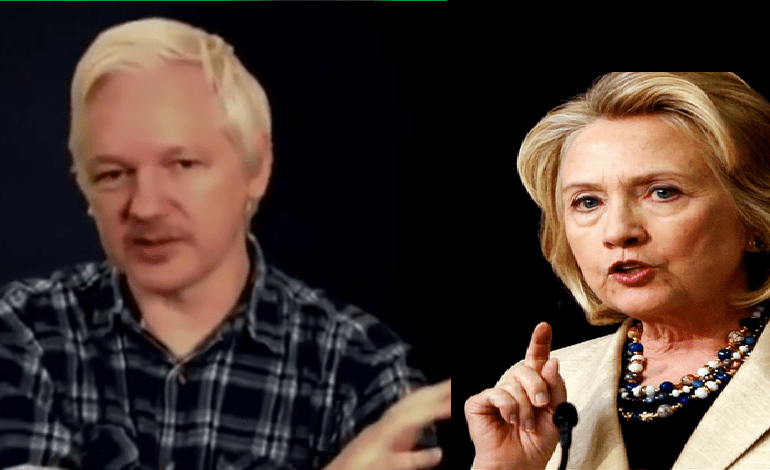 Now, our source wasn’t from the Russian state. But if it had been from a state, would we have suppressed that information before an election, or would we have accurately and fairly published it? Of course we would have published it.

Whatever your view on Assange, Clinton is embarrassed by the emails because of what they expose.

Did Russsia hack the emails?

In October 2016, WikiLeaks published emails from Hillary Clinton’s campaign Chairman John Podesta. The release caused a political explosion. FBI Director James Comey claims the Russian state hacked the email server to interfere with the US election. Then, Comey alleges, Russia passed the emails onto WikiLeaks through an intermediator.

But the WikiLeaks founder denies the allegation, asserting the Russia talk is to distract attention from the content of the emails:

So, at the heart of this issue is whether people were told the truth about Hillary Clinton and the DNC. If there hadn’t been an ugly truth there, it wouldn’t have made any difference. There was an ugly truth.

The public deserve to know the truth, no matter who the source is. So Assange argues Clinton misinforming the electorate is the crux of the matter.

The emails also showed how the Democratic National Committee (DNC) conspired against Bernie Sanders in the primary. People say there was a ‘rig’ against Sanders:

Revelations like these led to the resignation of Debbie Wasserman Schultz, the Chairwoman of the DNC.

Assange has been living in the Ecuadorian embassy for the past five years. In 2015, a UN panel ruled that the UK and Swedish governments are arbitrarily detaining the WikiLeaks editor.

Mark Wesibrot, co-director of the Centre for Economic and Policy Research (CEPR), says:

His crime, and that of WikiLeaks, has been the practice of journalism, and particularly in defense of human rights and civil liberties… WikiLeaks’ real offense was to expose the crimes of the most powerful people in the world.

At the time of writing, none of the corporate press has reported Assange’s comments to Democracy Now. But Assange said he would have published the emails even if they came from the Russian state. He argues that transparency is the most important issue here.

– Read more from The Canary on WikiLeaks.