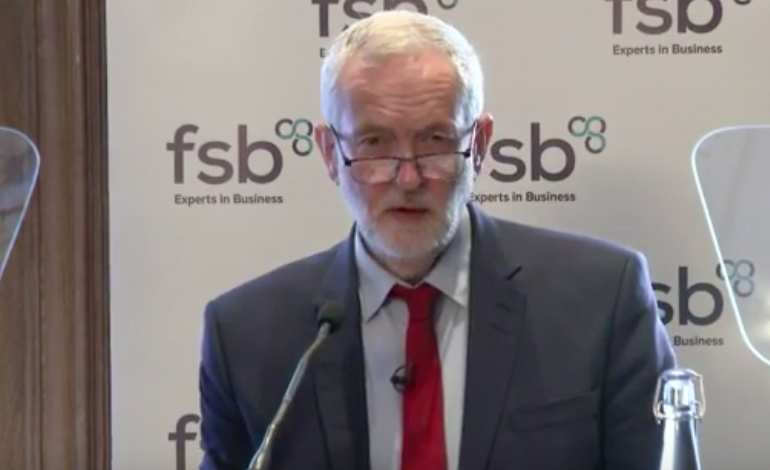 Labour leader Jeremy Corbyn won an ovation from a roomful of small business leaders this week, after putting a BBC journalist in his place. The response from the media has been to attempt to misrepresent events in the room. You can watch them here for yourself and decide who to believe.

Corbyn and the Federation of Small Businesses

The incident took place when Corbyn was addressing the Federation of Small Businesses (FSB) this week. The FSB is a not-for-profit group who provide advice to small businesses and represent their interests to government. The Labour leader was launching the party’s new policy to protect small businesses from the scourge of late payments by larger firms. As The Canary’s John Shafthauer explained:

It’s estimated that 50,000 more businesses could be kept open if the problem was eradicated. And it could give the economy a £2.5bn boost.

The strategy included reforms such as:

The announcement was received positively by the small business leaders, who are seeing their businesses downed by large firms withholding payments.

But when it came to the media questions, a BBC journalist interjected with a question on Syria. The audience made discontented noises, attempting to steer the journalist back to the issue by calling “No” and “Business”.

The reporter, ignoring both the rising anger in the room and the opportunity to ask unrelated questions in a few minutes, responds:

Sure. A quick question on Syria if I may?

After a third and fourth attempt by the reporter to hijack the conference, Corbyn steps away from the podium towards him, saying:

Look, I’m really sorry. This is a Federation of Small Business conference. I’m very happy to do an interview with you after this has finished about Syria. My media team have made that very clear to you. Is that OK?

The room breaks out into a loud and lengthy applause, as the BBC reporters stands in silence:

But media in the room represented the exchange somewhat differently. Corbyn offering to answer an unrelated question in a more appropriate context, with the support of the room, became:

A Telegraph reporter covering the event tweeted the following:

Hacks take note, don't turn up at a Corbyn presser thinking you're free to ask anything. You're not. Shutting down legitimate Qs now normal.

This is a clear misrepresentation of what took place at the conference.

It didn’t take long for the video of the event to surface, and social media users began challenging this misleading account.

Looking for your incisive questioning of Theresa May on GB arms trade with Saudi Arabia, but drawn a blank.
This is the nearest I can find: pic.twitter.com/DZhFokj49S

Kate has been at the forefront of some hard-hitting David Cameron coverage actually. pic.twitter.com/kDrUPIP322

The FSB incident epitomises the failure of a largely conservative mainstream media to report honestly on opposition policy, or Corbyn himself. Readers and viewers of their outlets will be left misinformed, and go on to misinform others. This is a betrayal of trust that the public should no longer tolerate.