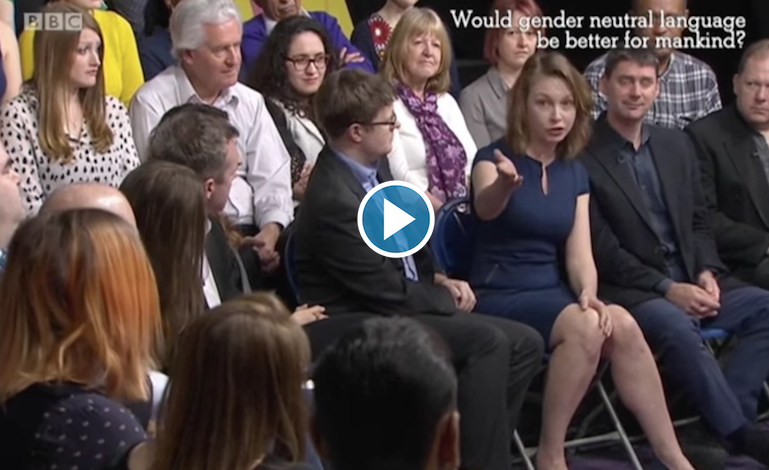 On Sunday 9 April, BBC’s Big Questions held a debate on the question: ‘Would gender neutral language be better for mankind?’ It came after it was revealed that students at Hull University were at risk of being marked down in their exams if they didn’t use gender-neutral pronouns. Gender-neutral language involves using ‘they’ and ‘them’, instead of ‘he’ and ‘him’ or ‘she’ and ‘her’. But during the debate on this issue, things got pretty heated.

LGBTQ+ activist Emma Simpson appeared on the programme and said she identifies as ‘non-binary’ (someone who does not identify as ‘male’ or ‘female’). But Belinda Brown, a contributor at The Conservative Woman, was up in arms at the suggestion that someone could be non-binary:

She conceded that a tiny minority of people are intersex (a person born with atypical sex characteristics) or transgender (a person whose gender is different from their assigned sex at birth). But Brown refuses to acknowledge that gender is more diverse than sex. Speaking about Simpson, she said, “everyone watching this programme can see that she is a woman”.

Simpson responded, accusing Brown of lacking both empathy and respect for them, as well as for the trans community at large. Indeed, one problem with Brown’s perspective is that it fails to consider the lived experience of people who don’t identify as ‘he’ or ‘she’. She isn’t open to the possibility that some people don’t want to identify with masculine or feminine norms. Brown instantly dismissed the notion.

There were mixed reactions to the debate on Twitter. Social critic and writer Natasha Devon emphasised the power of words:

Meanwhile, Tom Slater, Deputy Editor at Spiked, agreed with the point that comedian Andrew Doyle made in the programme:

Frank Ferundi, professor of sociology at Kent University, is concerned about the push for gender-neutral language. He said:

This linguistic policing is used as a coercive tool to impose a conformist outlook.

Sussex University Student Union (SUSU) has introduced a “gender inclusive” language policy. It advises students and staff to use ‘they/them’ pronouns to help prevent transgender discrimination on campus. The union is the first in the country to officially promote the use of gender-neutral language.

Some voice concern that universities are threatening free speech. And ask: is it right to censor the most basic elements of language to avoid offending a minority? But there is good reason for an increased sensitivity about ‘misgendering’ people. Trans people experience high levels of mental health issues and suicide due to transphobic discrimination. Part of this comes from having one’s identity invalidated by others.

While commentators such as Brown complain that gender-neutral language is an ideological move to police language, her dismissive approach actually prevents a productive debate from taking place. We should be sensitive about ‘misgendering’ people. And it’s helpful to engage positively with well-meaning people who don’t yet understand the importance of doing so. We should keep empathy and non-judgement at the heart of this conversation.

– Check out more articles from The Canary on LGBTQ+ issues.