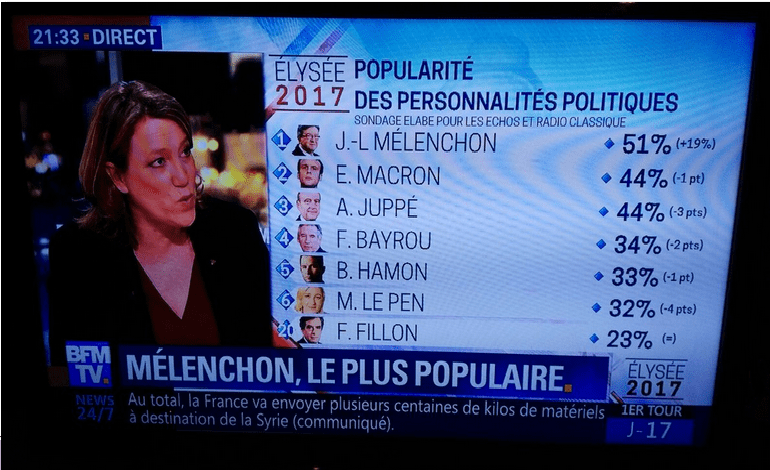 Left-wing MEP Jean-Luc Mélenchon has leapt 19 points in one month to become the most popular candidate in the French Presidential race. With less than two weeks until the election, the representative for ‘Unsubmissive France’ is leading on 51%, according to an Elabe personality poll for the financial paper Les Échos.

The presidential election begins on 23 April and ends on 7 May. While the Elabe poll was about likeability, Mélenchon is also hot on the heels of the two frontrunners, according to recent voting intention polls. And his party is just over a year old.

Unsubmissive France’s programme is called L’Avenir en commun or ‘A shared future’. Mandated by an internet vote, its ten pledges include:

Like Corbyn in the UK, Mélenchon is a republican democratic socialist, critic of the EU and liberal on immigration.

Mélenchon’s huge surge in popularity, following successful TV debates, has been mirrored in other polls. For example, the founder of Unsubmissive France jumped 14 points in another poll carried out by YouGov.

After his election on 52% in 2012, the popularity of incumbent François Hollande has plummeted to near rock-bottom. In January 2017, this led the Socialist Party (PS), the main left-leaning party in France, to opt for left-wing Benoît Hamon for its candidate in the presidential election. Hamon rejected the party’s drift towards neoliberalism, militarism and immigrant scapegoating. He represents the green left side of PS and shares Mélenchon’s policy of reducing the working week to 32 hours.

So the two candidates may split the mounting radical left-wing vote in France.

The collapse of the two-party consensus in France parallels Spain, where new left-wing grassroots party Podemos won 21% in the 2016 general election.

This shift must be placed in context. The 2008 financial crash rocked the economic orthodoxy of privatisation, financial deregulation and reduced public spending. Trump, Brexit and the rise of candidates like Mélenchon show that the tide is turning against the establishment. Whoever can ride that wave successfully has the chance to win big.

Imagine a 2nd round between Melenchon v Le Pen! An existential crisis for France — and the EU!

France’s two-round Presidential system means the two most successful candidates in the first round proceed. With less than two weeks to go, Mélenchon’s surge has taken the rollercoaster election for yet another turn. If Mélenchon can make the second round, he could emerge as President.

– Check out more of The Canary’s global coverage.