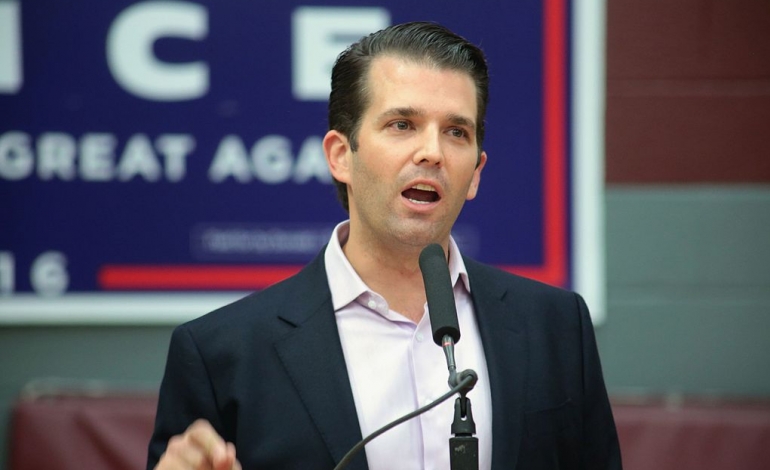 Donald Trump Jr. has appeared on ABC News to join in with his father’s bashing of London Mayor Sadiq Khan following the London bridge attack.

Trump Jr. excused his dad’s tweets, even though he took Khan’s comments about the attack out of context. Trump tweeted:

At least 7 dead and 48 wounded in terror attack and Mayor of London says there is ‘no reason to be alarmed!’

You will see an increased police presence today, including armed officers and uniformed officers.

There is no reason to be alarmed by this. We are the safest global city in the world. You saw last night as a consequence of our planning, our preparation, the rehearsals that take place, the swift response from the emergency services tackling the terrorists and also helping the injured.

So it looks like Trump Jr. really is his father’s son. Like his dad, he doesn’t care about what people actually think and say but casually ignores, denies, or misrepresents facts to further his agenda. Both Trump and his son have used the terror attack and Khan’s sensible statements as an opportunity for cheap political point scoring.

It’s easy to see how Trump Jr. matches his father’s arrogance, when he says: “Every time… he’s [Trump’s] proven to be right.” (Except all of those times he’s lied, of course). But more shocking than this ‘Team Trump’ bias is the accusation that Trump Jr. levelled against Khan. He said:

Maybe he [Khan] should do something to fix the problem rather than just sit there and pretend there isn’t one.

Trump Jr. is suggesting that Khan is somehow in denial about the problem of terrorism; that he doesn’t grasp the full gravity of the situation, and doesn’t really care. But if you listen to what Khan had to say following the attack, we can see this isn’t the case. He said:

We will never let them [terrorists] win, nor will we allow them to cower our city and Londoners.

Khan stressed that Londoners should be both “vigilant” and “calm”.

‘Maybe he should do something about it’

Trump Jr. emphasised that Khan isn’t doing enough to combat terrorism. He said that, rather than attacking his father, “Maybe he should do something about it [terrorism]”. Although, despite the Tories’ police cuts, the police response to the attack was reportedly “fantastic”.

Trump might think that his Muslim travel ban is “smart” and “tough”. But as The Canary previously reported, former State Department extremism expert Shahed Amanullah argued that the ban on Muslims from a number of countries entering the US won’t keep America safe. All it will do is further fuel xenophobia against the Muslim community.

Does Trump really care about terrorism?

As much as Trump claims to be tough on terrorism and ‘doing something about it’, he’s actually not tackling the root cause of the problem. In fact, he’s arguably supporting the root cause. He recently signed, for example, a $109.7bn arms deal with Saudi Arabia. This is in spite of the fact that he had previously linked the Gulf state to the 9/11 attacks; and in spite of the Saudi state ideology of Wahhabism being the driving doctrine behind both al-Qaeda and Daesh (Isis/Isil).

This U-turn suggests that Trump’s main priority is business. Even if that business is with a country that promotes an ideology which the EU has claimed to be a major source of global terrorism.

What we need today is not cheap macho soundbites, or useless immigration policies which fuel more hatred. What we need is a clear-headed and rational approach.

– In Britain, vote for a change in strategy on 8 June.