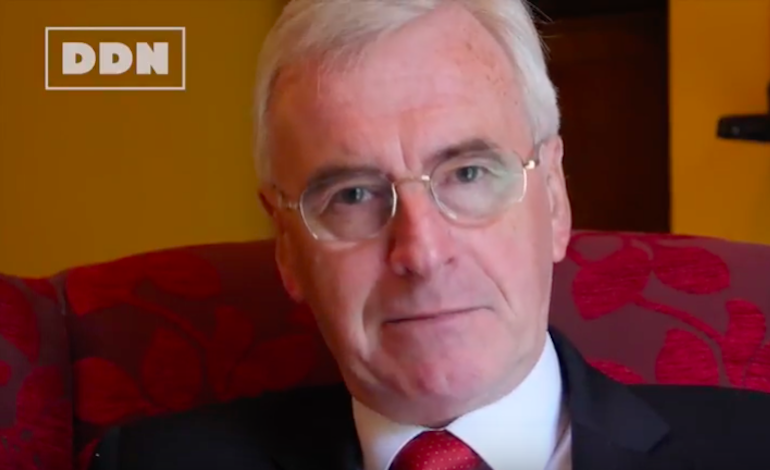 John McDonnell has given an interview to Double Down News that has ripped apart the mainstream media and their shocking coverage of the election. But McDonnell says it doesn’t matter, because the general public has got over their lies.

The 2017 general election has presented the Conservative Party – its campaign and its government – for what it is, says McDonnell. “Shocking”. “Liars”. And “incompetent”. Running her bid to win on a negative campaign against Labour, Theresa May has done little else to substantiate her manifesto. But it’s the current Labour leadership that’s been under attack. As McDonnell says: “The mainstream media have not been the kindest to us to say the least.”

But with the media hounding Jeremy Corbyn, McDonnell, their colleagues and their families, McDonnell says:

We’ve just cut through that. People no longer believe their lies anymore. And they are lies. They make up stories. They invent things. And they just abuse people all the time. I think people have had enough of that sort of politics. They’re just not listening to them anymore.

McDonnell acknowledges that people have an alternative source of information in social media and it’s here they find an alternative that isn’t biased towards the establishment:

We now have a form of media which is much more democratic and open and no longer controlled by the oligarchs.

Eager to smear Corbyn and McDonnell, it’s the mainstream media that’s the establishment’s biggest propagandist. On Wednesday 7 June, just one day before the election, right-wing tabloids have deployed a last ditch attempt to attack Corbyn by associating him with extremist groups. An association The Canary has debunked.

McDonnell and Corbyn have been promoting peace their whole lives, he reminds us. And:

Some of these Conservatives that have been attacking us. I can remember only a few years ago they were supporting the apartheid regime in South Africa. Some of them were calling for Nelson Mandela to be hanged.

“We are the many, they’re the few”

The “whole of the elite establishment” are against him and Corbyn, says McDonnell. Because they want to redistribute power and wealth across the whole population. And McDonnell believes they’ll see success. Because they have the solidarity of the masses.

And the masses just don’t believe the establishment anymore.

– See more from Double Down News.