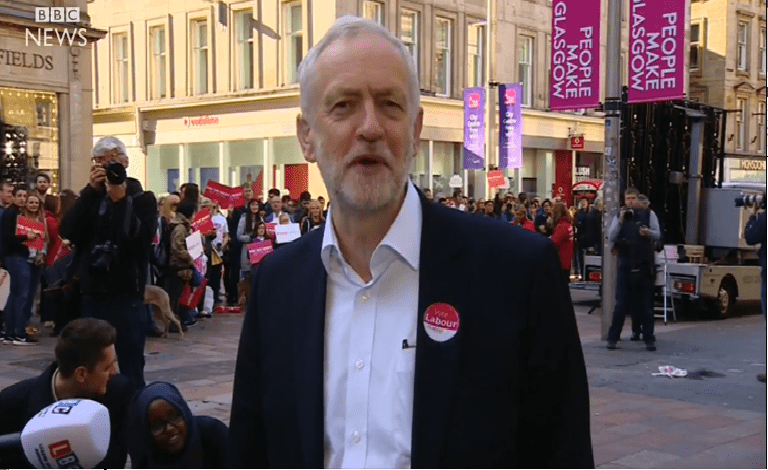 We don’t defeat terrorism by ripping up our basic rights and democracy.

Indeed, many have pointed out that removing fundamental rights actually amounts to carrying out the will of terrorists:

May after Manchester: terrorists hate our human rights & freedoms.

After London Bridge: I will remove your human rights to fight terrorism.

Corbyn made it very clear that an attack on human rights isn’t the way to go:

Terrorism legislation has long been used as a pretext to erode the rights of UK civilians and hand sweeping powers to government, as Corbyn alludes to. The Labour leader said:

What I don’t want is executive orders where politicians can make decisions outside of the law and just decide what will happen to an individual. There has to be a judicial process. Listen, if our democracy is under threat you strengthen your democracy in order to deal with that threat.

At the same time as attacking human rights and the internet, May has suppressed a report into terrorist funding because it reportedly implicates Saudi Arabia. Theresa May is a strong supporter of Saudi Arabia, and her government recently approved £3.5bn worth of arms export licences. The Conservatives only issued the investigation in the first place as part of a deal with the Liberal Democrats. Now they are burying its findings, which appear to suggest the ruling party values arms sales to a foreign power over the safety of British citizens. When challenged on the matter, Foreign Secretary Boris Johnson had no answers and contradicted himself.

Corbyn also challenged May on her deep cuts to ordinary policing:

She’s the one who presided over the loss of 20,000 police officers… We would immediately employ 10,000 more police officers and properly fund out security services.

A report from the Institute for Fiscal Studies (IFS) shows that Conservative austerity cut 20,000 police officers between 2009 and 2016. Total employment in the police force also fell by 17.4% during the same period.

May claims to be strong on terror, while cutting vital police services and suppressing reports into terror resourcing. She then mounts an extraordinary attack on human rights and internet freedom. In doing so, she fails to realise these are the very qualities that define our democratic society. By contrast, Corbyn won’t stand for the appropriation of terrorism to erode civil liberties. He would starve terrorist organisations of resources by going after their funding, and would properly resource our emergency services.