Theresa May agreed to a last-minute interview with Jon Snow. She's regretting it now [VIDEO] - Canary 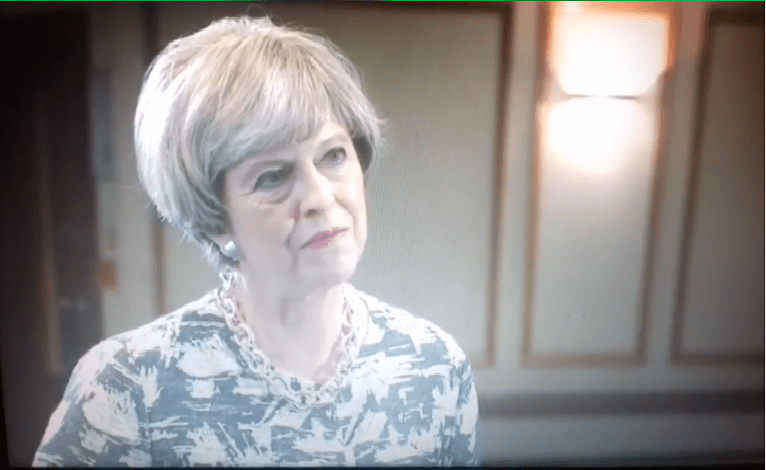 Theresa May agreed to a last-minute interview with Channel 4‘s Jon Snow. But she’s probably regretting it now. Anchor Snow called the sitting Prime Minister out for her campaign, which even Conservative MPs have denounced as a “clusterfuck“:

People have seen you as never before, up close, and the question really is – if you run the Brexit negotiations as indifferently as your campaign appears to be run, they can be very worried

Well I’m glad you caught up with her, but it sometimes feels as though you’re in a separate room.

Gibbon then branded May’s “rigid” behaviour “one of the stories of this election”.

A local paper in Plymouth had a similar experience with May to what Gibbon describes.

Before 8.30am today, I had never interviewed a Prime Minister. Heading back to the office to transcribe my encounter with Theresa May at Plymouth’s fish market, I couldn’t be certain that had changed.

The local paper summed up the interview as “three minutes of nothing” and “without clarity, candour, or transparency”.

Snow also questioned May on the failure of making her campaign about her personality:

The way you call them ‘my Brexit negotiations’ defines exactly how you’ve run this campaign – me, mine, me, Theresa May… that is perhaps one of the ways in which the campaign’s gone wrong

On the contrary, as Snow points out, we haven’t received any resemblance of a clear plan for Brexit other than feelgood soundbites. Under immense pressure, May finally agreed to the interview with Snow. But she remains the first sitting Prime Minister in 40 years to duck a BBC Radio 2 media appearance during a general election. And on Channel 4, Snow called out a campaign beset by embarrassment.

– Get out and vote on 8 June – that’s this Thursday. And encourage others to do the same.