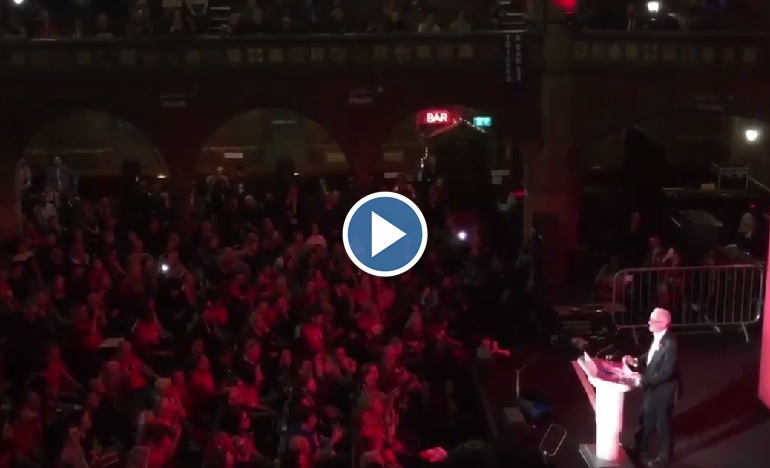 Jeremy Corbyn’s last campaign rally took place on 7 June at the Union Chapel in London. This is a Christian church which welcomes all people to attend its services, “regardless of race, gender, faith and sexuality”. It is also a music venue and the home of a charity which supports “people facing homelessness, risk of homelessness, crisis and isolation”.

This was a strong message for Corbyn to finish his campaign on. One of unity and community. One of commitment to supporting the most vulnerable people in society. And one that clearly resonated for the people who came out to see him.

Crowd outside, across the street, and stopping traffic outside of Union Chapel for Jeremy Corbyn's last campaign speech #GE2017 pic.twitter.com/Z3FIntZYAD

That message was all the more important because today, as people choose their political representatives, British society is incredibly polarised. Between investment and austerity; peace and war; nationalisation and privatisation; environment and no environment; hard Brexit and soft Brexit. And in Britain’s biggest religious community – Christianity, there is also division.

In that environment, the message of uniting for the cause of social justice was incredibly important.

Corbyn and the Christian vote

We might have thought that a bearded man of peace who stands up for the poorest and most vulnerable people in society would have been a vote winner for Christians. But a recent Premier poll suggested that the Conservative Party was a clear leader among Christian voters, and that Theresa May was somehow the candidate who they considered to be ‘most like Jesus’. Even though a subsequent Premier article would outline a number of reasons “Why Jeremy Corbyn is more like Jesus than Theresa May”, saying:

His principles mean more to him than popularity… This may be a sin for a politician, but I admire it in a human being. It’s why so many papers, owned by billionaires, are trying to crucify him. But this is a man with a genuine concern for the poor and a genuine passion for peace…

He talks to his enemies, he doesn’t want to kill them. As a Christian, I see very little of that from politicians and I like it very much…

He cares about the poor… He really does. He’s dedicated his life to serving them, not the Bullingdon Club, not the money-lenders or the kings and princes of this world.

If we needed one image to represent who Corbyn is, this might well be it:

Corbyn has previously made it clear that he shares a number of values with Christians. In this year’s Easter message, he said:

We hear painful stories every day, of homelessness, poverty, or crisis in our health service – or across the world, of the devastating consequences of war and conflict, including millions forced to become refugees… We need to respond to these problems head-on, through action and support for social justice, peace and reconciliation. These principles are at the heart of Christianity…

He continued by speaking about “Jesus’ example of love and sacrifice”, and “the Easter message of redemption and peace”. And he insisted:

At a time of growing conflict, that message of peace could not have more urgency throughout the world.

I meet Christians and others of all faiths and none on a daily basis who share and live these ideals. People who give their time for others – whether those running food banks, protecting the vulnerable, looking after the sick, the elderly, and… our young people. That spirit of respect for each other, peace, and equality is one we can all share.

The Conservative record in power

Corbyn has previously said he isn’t an atheist but that his beliefs are “a private thing”. Self-proclaimed Christian Theresa May, meanwhile, has supported a number of socially conservative causes, even turning up recently at a church accused of conducting ‘exorcisms’ on gay people. And her party’s record in power leaves a lot to be desired, too.

While right-wing media outlets predictably say that Christians should support May over Corbyn, there is a good argument that the opposite should be true. The Conservative government, for example, used this year’s Easter break as an excuse to deny disability benefits to 160,000 people. And in government, May’s party has represented a serious threat to the NHS, the education sector, working people’s living standards, social housing, the environment, world peace, and the well-being of Britain’s most vulnerable people. In other words, as actor David Schneider points out, running through fields of wheat is far from being the worst thing Theresa May has ever done:

Details emerge of what went through Theresa May’s mind when asked what she’d done that was naughty. pic.twitter.com/w0l8PAMPJR

In fact, as a result of the party’s record in power, people have taken to mocking how uncomfortably the Conservative ideology sits alongside Christianity:

And as Jesuit priest James Martin has said:

I will never understand how politicians who call themselves Christian can read the Gospels and then treat the poor and the sick like dirt.

Indeed, for Christians who truly believe in principles like compassion and peace, this year’s general election should be one of the easiest choices in decades.