John McDonnell accuses The Sun of lying about him. And they could be breaking election law. Again. - Canary 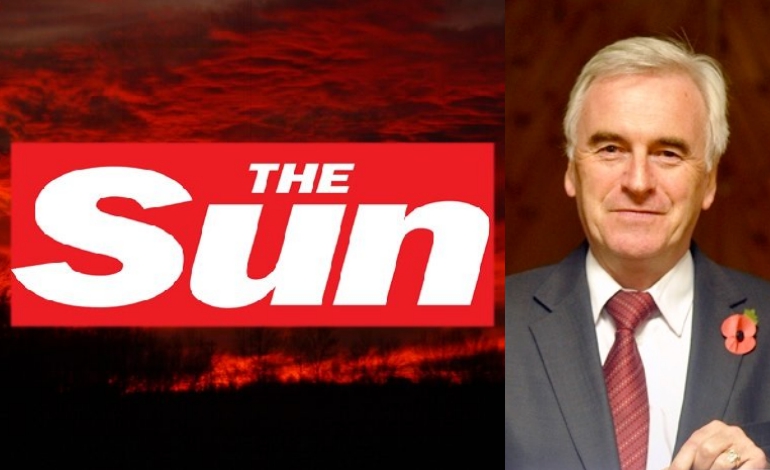 Shadow Chancellor John McDonnell has accused The Sun of lying about him. And the smears could mean the paper could be breaking electoral law. Again.

The Sun ran a story on 7 June claiming:

And it quotes McDonnell’s Conservative opponent in Hayes and Harlington, Greg Smith, branding him a “stinking hypocrite”. Smith continued:

Why can he never just be open and honest about his background? John McDonnell is trying to pull the ladder up for kids today despite his own privileged education.

But in a series of tweets, McDonnell set the record straight:

Story on me in Sun untrue.I did not attend a prep school.I went to Grammar then for period to De La Salle college to prepare for priesthood

2. I returned to Grammar after I decided I did not have a vocation to catholic priesthood. My Dad was bus driver and Mum a shop worker.

3. No way could they afford fees. They were proud I tried for the catholic priesthood & equally supportive when I returned to local school.

Under electoral law, it is an offence to make a false statement [pdf] about a candidate:

It is an offence to make or publish a false statement of fact about the personal character or conduct of a candidate in order to affect the return of a candidate at an election.

Through printing these lies, and including a quote from McDonnell’s opponent branding him a “hypocrite” based on falsehoods, it seems the paper could be guilty of breaking the law.

Cutting through the bullshit

But McDonnell is very aware of the lies that papers like The Sun propagate. He stated:

We’ve just cut through that. People no longer believe their lies anymore. And they are lies. They make up stories. They invent things. And they just abuse people all the time. I think people have had enough of that sort of politics. They’re just not listening to them anymore.

And he believes things are changing:

We now have a form of media which is much more democratic and open and no longer controlled by the oligarchs.

And it seems many social media users agree. Several are posting images of them burning or binning The Sun.

This election, we do have a chance to cut through the bile of the right-wing media; a media that is attempting to convince us to vote against our own interests in favour of the interest of the billionaires who run them.

We have a once in a lifetime opportunity to vote for something different. Let’s do this.