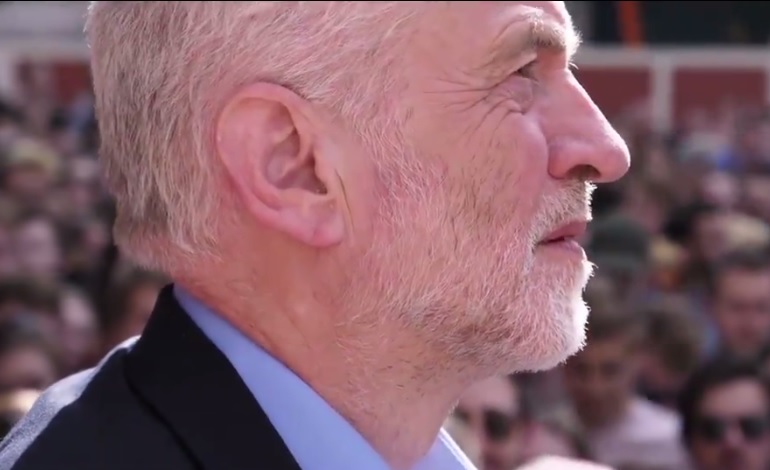 After a gruelling day of tabloid lies and smears on 7 June, Jeremy Corbyn’s campaign released a video. And it has brought many people across Britain to tears.

It has also smashed to pieces the monstrous image of Corbyn that tabloids have desperately tried to sell to the country. And consequently, it reveals the true inhuman face of Britain: criminal media barons who wouldn’t know love or decency if it walked up and shook them by the hand.

A vision of Britain

The video starts with a journey through Britain’s oceans, cliffs, fields and streets. Then it zones in on the people, and the lives they lead. We watch someone sweeping up in a hairdressers. We see the fishermen unloading their catch. And we witness the farmers, the postman, the mechanic, and the newsagent going about their work. We also see the children playing and the young adults socialising.

It’s our world. One that many of us come across in our daily lives. The moments we don’t see, however, also feature in the video. The young disabled man alone in his home. The elderly lady, shopping bags in one hand, walking stick in another, heading to her flat door. Another sat alone in a nursing home. And the behind-closed-doors serious conversations of our healthcare workers.

The video’s soundtrack features Lily Allen’s cover of the Keane song Somewhere Only We Know.

Then we see Corbyn, in discussions and at rallies. Always with people, talking, listening, hugging and shaking hands. And there are lots of people to engage with, as the camera pans across the massive crowds that are drawn to his speeches.

It’s an image, frankly, of togetherness. Or as Labour would say, of a society involving “the many”, not just “the few”.

Sickeningly, however, at the same time some were creating this video, others were busy assembling another narrative. The Sun and The Daily Mail were doing all they could to rip this society apart. Their aim was to get people to despise Corbyn. And the vehicle they chose to achieve this was fear. These tabloids even stooped so low as to lie and try to paint a rally for Palestinian rights – one of the most persecuted peoples on Earth – as some kind of terrorist gathering in order to ‘get’ Corbyn.

But perhaps that was the only possible option these outlets saw for themselves. Because they, and the political party they support, haven’t got a positive vision for Britain. So hate, division and fear are the only things they can think of to trade in.

This video though, and his campaign as a whole, shows that’s not the case for Corbyn. Kindness, justice, empowerment and equality have been the predominant themes in his battle for Number 10.

And no matter who emerges victorious in the election, long may those positive forces continue. Because our society, as does every functioning society, depends on them. Even if that’s something these monstrous tabloids will never understand.

4) Vote today! And strongly encourage others to do the same.