Young people could have a nasty surprise for Theresa May. And this 21-year-old travelled 540 miles to prove it - The Canary

Young people could be holding the key to Number 10 today as we go to the polls. There has been much written about the youth vote and the possibility that young people could swing this election. And historically, the turnout of those of under 25 has been low. But one 21-year-old is determined to prove pundits wrong. She took a day off college and travelled 540 miles to exercise her right to vote in North Cornwall.

As The Canary previously reported, there have been problems with some postal votes going missing. Cathy Parkin was one of the people whose vote disappeared. But she wasn’t deterred, traveling 14 hours on the coach just to cast her vote. She posted about what she had done on Facebook: 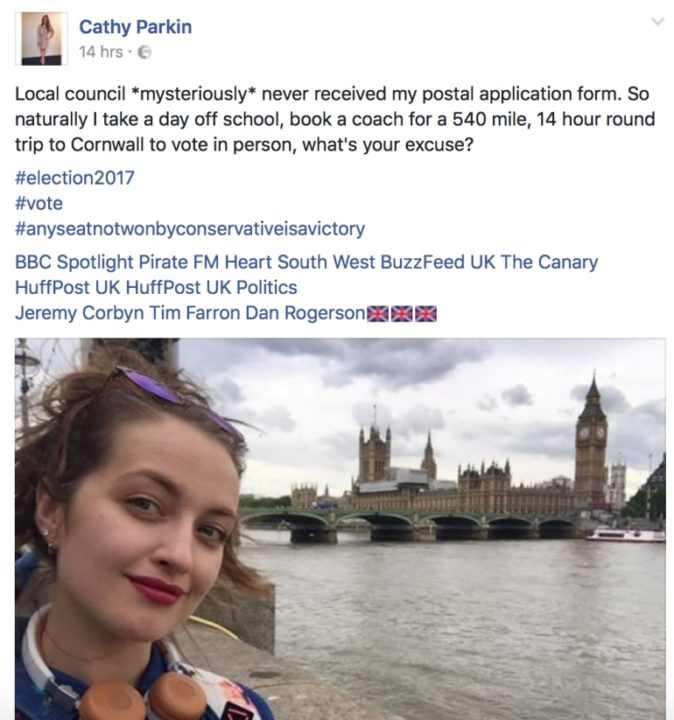 Speaking to The Canary, Parkin stated she didn’t know how her postal vote went missing:

I have no idea how my form never made it as I posted it before a few of my flatmates at uni, and they received theirs the week before the election.

A message for young people

Parkin spoke passionately about the difference people, young and old, can make in this election:

Politics is a very big thing and I know a few people (young and old) who don’t vote because they are adamant it won’t make a difference. If you have 1,000 people that think this, and if they realised they’re part of a much larger network, they might realise it does. These are tough times we live in and it’s hard to become segregated and selfish, but if we realise we’re all in this TOGETHER, all of us TOGETHER can make a difference.

And she says her fellow students have also been engaged:

I currently attend East 15 Acting School at Southend and I must say the young people there are a credit. Like me, they’re all pressing people to vote and make sure their voice is heard.

Yes, it may involve a walk in the rain. But that’s an incredibly small sacrifice compared to five more years of Tory misery. And as Parkin says, if she can travel 540 miles, “what’s your excuse?”

If you’ve already voted, here are some other things you can do:

Call your friends. Call your family. Text, tweet, Snapchat, Instagram, carrier pigeon, whatever your method of choice. Communicate, remind and cajole. Persuade them to make the effort. And remind them of what Jeremy Corbyn is offering them. Remind them this is the opportunity of a lifetime. And if that doesn’t do it, tell them they could get a free beer.

Offer people lifts. See if and how you can help them. Go with people if they’re nervous or anxious about going to a polling station. Or if they’re first-time voters and worried because they’re not sure what to do. Get involved with a local group and knock on doors. Make sure that elderly aunt or grandfather who wants to protect their house from the dementia tax can get to the polling station.

Let people know how to find out where their nearest polling station is. Remind them that, as long as they’re registered, they don’t need their polling card to vote.

Take and share selfies outside the polling station (NOT INSIDE, as this is illegal). But also share articles, videos, memes. Remind people what the Conservative Party has done to this country. Tell people about our NHS, about the hospitals that are being closed and the services that are being sold off to the highest bidder. Tell people about our schools that are suffering from so many cuts that teachers are writing begging letters to parents. Remind them that our public sector workers are being forced to use food banks.

And show them the alternative that Corbyn is offering and the clear plan he is proposing. This is a once in a life time opportunity. Please take it. And please encourage others to take it.