Amber Rudd is hiding information from us. So a former ambassador has broken the silence. - Canary 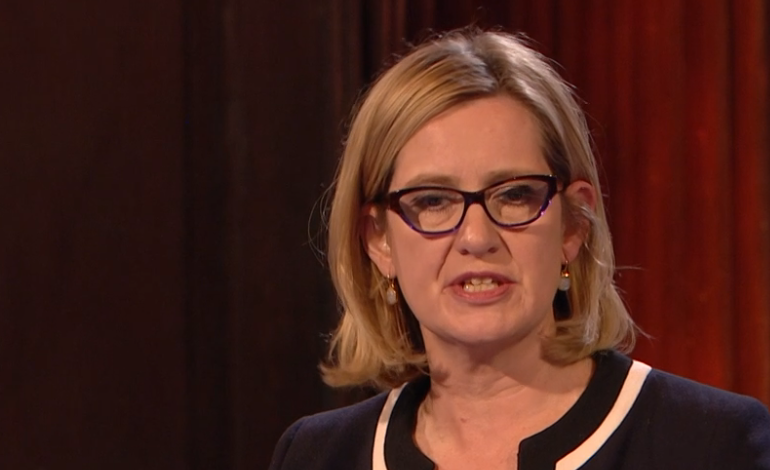 Home Secretary Amber Rudd has held back a full report into the funding of extremism. A move that many opponents believe is to protect UK ally Saudi Arabia. But now, a former British ambassador to the country has spoken frankly about the Saudi connection to extremism.

What is Amber Rudd hiding from us?

On 12 July, Rudd published only a 430-word summary of a long-awaited report into extremist funding. And this only came after frequent pressure from opposition politicians. In the summary, said Green Party co-leader Caroline Lucas, Rudd gave Britain:

absolutely no clue as to which countries foreign funding for extremism originates from – leaving the government open to further allegations of refusing to expose the role of Saudi Arabian money in terrorism in the UK.

a right to know if any governments, foreign or domestic organisations or individuals are funding extremism in this country.

there is a strong suspicion this report is being suppressed to protect this government’s trade and diplomatic priorities, including in relation to Saudi Arabia. The only way to allay those suspicions is to publish the report in full.

Rudd claimed the government was withholding the report “because of the volume of personal information it contains and for national security reasons”.

A former ambassador speaks out

But former ambassador Sir William Patey clearly wasn’t happy about the relative silence on Saudi Arabia. So he spoke out, saying that, while he didn’t believe the Saudi regime was funding terrorism:

They are funding something else, which may down the road lead to individuals being radicalised and becoming fodder for terrorism.

This “something else”, he explained, was the promotion of the ultra-conservative Wahhabi/Salafi ideology.

The Saudis have spread their state ideology of Wahhabism around the world for decades, using billions of petrodollars to do so. And The New Statesman claims, as Patey suggests, that “the narrowness of the Wahhabi vision is a fertile soil in which extremism can flourish”. Indeed, while only some Wahhabis would condone terrorism, and ideology isn’t the only driving force behind such acts, it is no coincidence that both al-Qaeda and Daesh follow this ideology. In fact, one senior Qatari official has claimed the latter began as “a Saudi project“ (Qatar’s ‘project’ in Syria was allegedly al-Qaeda affiliate Jabhat al-Nusra). A Hillary Clinton email published by WikiLeaks, meanwhile, also bluntly describes Western allies Saudi Arabia and Qatar as direct supporters of Daesh and other extremist groups.

In 2007, The Guardian said Saudi funding of Wahhabi mosques in the UK was an immense “propaganda effort” that was worrying Muslim leaders. Such mosques form a very small minority of mosques in Britain. But thanks to Saudi funding, the number of these institutions reportedly increased from 68 in 2007 to around 110 in 2015.

Many Muslim leaders and scholars have long stressed that the tiny minority sect of Wahhabism is not representative of the world’s Muslim community as a whole.

Patey worked in government for decades before becoming British ambassador to Saudi Arabia (2006-2010). And during the Arab Spring, he gave signs that he was in favour of gradual reform rather than sudden change. A stance that very much seems to determine Britain’s policy towards Saudi Arabia (if not elsewhere). Theresa May, for example, has proven herself to be a strong supporter of Saudi Arabia. Her government recently approved £3.5bn worth of arms export licences to the country; in spite of its human rights record and alleged war crimes in Yemen. It also reportedly gave ‘secret evidence’ in order to convince the High Court that UK arms sales to Saudi Arabia are legal. Tory politicians, meanwhile, have apparently received nearly £100,000 in gifts, trips and fees from the hereditary dictatorship.

And it’s not just the Conservative Party’s opponents on the left who have criticised its links to Saudi Arabia. Even right-wing thinktank The Henry Jackson Society has recently insisted that “Saudi Arabia is undoubtedly at the top of the list” of nations advancing extremism.

Rudd may have held back the full report into extremist funding for “national security reasons”. But critics will continue to believe that the aim is to protect Saudi Arabia from further scrutiny. And as Abbott says, “the only way to allay those suspicions is to publish the report in full”.

After all Britain’s been through so far in 2017, we deserve to know the whole truth.

– Ask Theresa May and your MP to tell us the whole truth about foreign funding of extremism in the UK.

– Support The Canary if you appreciate the work we do. Also see more Canary articles on Saudi Arabia, Yemen, and the arms trade; and for more Global articles, follow us on Facebook and Twitter.