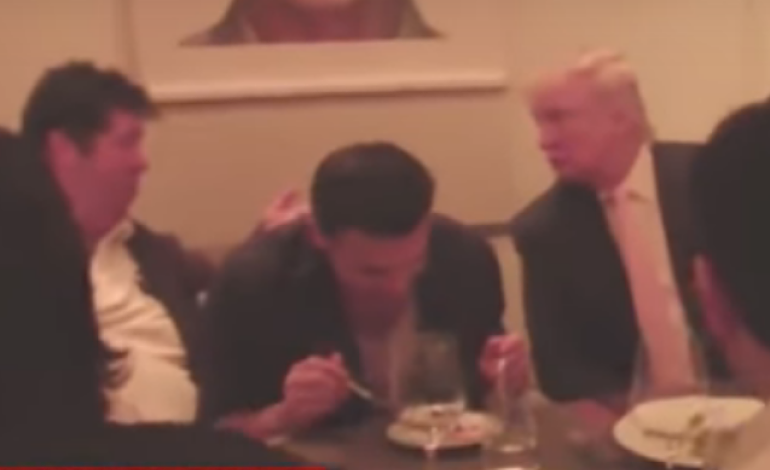 An eminent law professor has described emails released by Donald Trump Jr as the “proverbial smoking gun”. And now, a video has emerged that provides a direct link between the US President and people named in the emails.

We now have the proverbial smoking gun: TJr was part of criminal conspiracy to violate fed crim laws banning foreign aid to any US campaign. https://t.co/rEvNRm0IN9

Archival video footage has now emerged of Trump dining with key figures involved in his son’s controversial email exchange. Reportedly shot in Las Vegas in 2013, it shows Trump sitting down with members of an Azerbaijani-Russian family – the Agalarovs,. The family would later offer information on Trump’s presidential election opponent, Hillary Clinton, to his son.

The Agalarovs hosted Donald Trump’s Miss Universe pageant in Moscow in 2013. And Trump appeared in one of Emin Agalarov’s music videos. Also present is publicist Rob Goldstone, who went on to reach out to the Trump family about the Clinton information.

Donald Trump Jr released a series of emails on Twitter after hearing that they were the subject of a story which The New York Times planned to publish. And WikiLeaks founder Julian Assange subsequently tweeted that he had advised Trump Jr to publish the emails in full.

In one of the emails to Trump Jr, Goldstone offered incriminating material on then-presidential candidate Hillary Clinton which would “be very useful to your father”. Trump Jr immediately replied “I love it”. The email added: “This is obviously very high level and sensitive information but is part of Russia and its government’s support for Mr Trump.”

Here's my statement and the full email chain pic.twitter.com/x050r5n5LQ

Here is page 4 (which did not post due to space constraints). pic.twitter.com/z1Xi4nr2gq

Those statements [in the emails] show intent — a clear-cut willingness to have Russian support — and they reveal specific actions undertaken to obtain it.

It is possible that other laws were broken too, such as the laws against coordinating with a foreign entity on an expenditure.

The US President claims he knew nothing about the emails, or the meeting that took place. But he also defended his son, calling him a “high quality person” and applauding “his transparency”.

Trump Jr said in a statement that, at the meeting with Veselnitskaya, “it quickly became clear that she had no meaningful information”. But clearly, there are still many questions that need answering. Is this, as some law experts claim, an actual “smoking gun”? Or, considering the ongoing investigations into Trump’s alleged links with Russia, is it the beginnings of another Watergate?