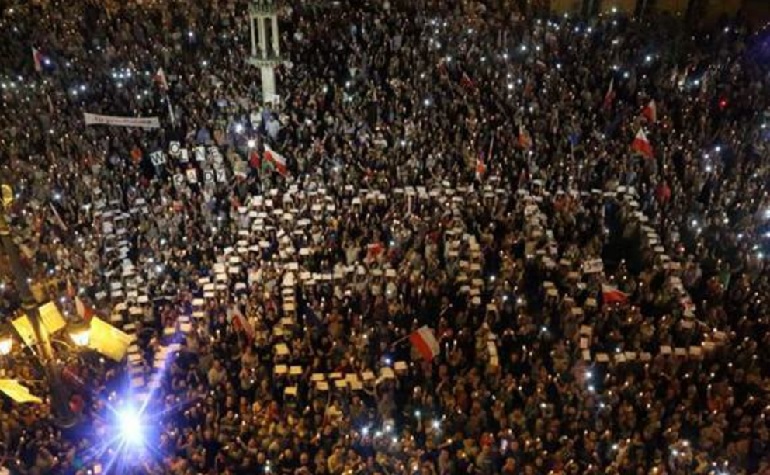 Thousands of people have hit the streets in Poland, accusing the right-wing government of trying to subvert democracy. And the country’s controversial attempts to put its courts under political control could now be placing it on a collision course with the EU.

The country’s parliament, under the right-wing Law and Justice (PiS) party, has passed a law to dissolve the National Council of the Judiciary – the independent body which is responsible for the nomination of judges. The PiS also submitted a draft law that could force the entire Supreme Court into retirement; giving the country’s justice minister the ability to decide which judges can stay in their current roles.

These actions have sparked outrage from the people of Poland, with thousands taking to the streets in protest.

Poland is currently showing us how it's done. Regular citizens standing up to an authoritarian regime. pic.twitter.com/qBHd5Zb85g

Major demonstrations in Poland protesting takeover of judiciary. Didn't have to bus in 15,000 for this one. pic.twitter.com/URKEP9zxxN

In the UK (and most democratic societies), the parliament and the judiciary are two separate entities. One proposes laws, and the other puts them into practice independently.

But in Poland, PiS leader Jarosław Kaczyński claims the Supreme Court is “protecting people who had served the old [communist] regime”, and that the courts are “controlled by lefties and… subordinated to foreign forces”.

The courts are sometimes too slow, some of the fees payable by citizens are too high, the system of legal aid is inadequate and under-financed – we can see the problems… But this is like going to the doctor with the flu and he treats you by amputating your leg.

On a collision course with the EU?

The European Commission is reportedly “very close” to triggering Article 7 of the Lisbon Treaty over the events in Poland. This would be an EU first. The article is reserved for freezing a country’s vote if their commitment to freedom, democracy, equality, the rule of law, or respecting human rights is brought into question.

Konrad Szymanski, Poland’s deputy foreign minister in charge of European affairs, has responded by saying “we will defend our position, including before the Court of Justice”.

With the country’s relationship with the EU already in very stormy waters, could Poland be the next crack in the European project?

– See more on Poland at The Canary Global. Also visit our Facebook and Twitter pages for more of our international coverage.

– Join The Canary if you want to support fearless independent journalism.