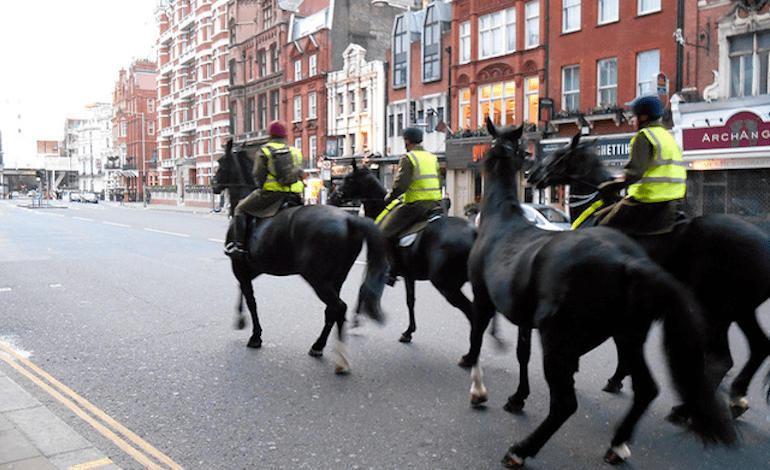 On 22 July, police shut down one of Britain’s most elite streets for a very important political message. The Palestine Solidarity Campaign (PSC) delivered this message outside the Israeli Embassy on High Street Kensington.

PSC and its supporters were protesting against the recent closure of al-Aqsa mosque in East Jerusalem, a deeply sacred place for Palestinians. The 2-day closing of the site was called “unprecedented” and threatens the fragile status quo, as control of al-Aqsa is important to the Palestinian cause:

"Palestine is central to the cause of justice all around the world" PSC protest in London #FreePalestine #SaveAlAqsa pic.twitter.com/dBSdIbFXEa

Hundreds came out in solidarity outside Israel’s London Embassy, while police closed off the busy road as the crowd spilled onto it: 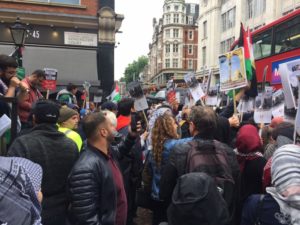 The world has a duty

PSC’s chair Hugh Lanning told The Canary the group organised the protest against Israel’s actions in East Jerusalem. But also it organised the event to shine light on Israel’s continuing occupation of Palestine and siege of Gaza. Lanning said it was all part of the effort by Israel to drive Palestinians off their land:

Lanning also pointed to the significance of events:

In Jerusalem… if you don’t have control of al-Aqsa, there is no hope for the Palestinians…

If this had been St. Paul’s or the Vatican, it would have been headline news. But it’s Palestinian and it’s Muslim… equally it’s a site that’s supposed to be under international control… the UK and the US ought to be stopping them.

Lanning also said it was frustrating that the media frame tensions as a mere security issue rather than addressing the underlying problem of Israel’s occupation. And he says the reality is that Israel has kept Palestinians as second class citizens.

The latest development represents a “step-change”, Lanning says. It started when three Israelis of Palestinian origin reportedly attacked two Israeli soldiers near the al-Aqsa mosque. All five people died in the incident. The assailants had fled to the al-Aqsa site, and as a result Israel installed metal detectors there, outraging Palestinians.

But tensions peaked on 21 July after men under 50 were banned from Friday prayers and protests ended in violent clashes. At least six people were killed that day.

Some analysts are rejecting Israel’s claim that it is imposing measures for security reasons, saying this is simply a pretext:

Policy fellow at @AlShabaka, @NurArafeh, on Israel's ramped up repression against Palestinians in Jerusalem: pic.twitter.com/Nz4Hy8KXa8

The BBC has reported that Israel is looking for an alternative to the imposition of metal detectors. It is looking to Arab nations to come forward with a solution. But as Haaretz argues [paywall], key players like Egypt and Saudi Arabia are remaining quite quiet on the matter. Perhaps because they don’t want to ignite strong reactions within their own countries. Current intra-Arab tensions, such as Qatari support for groups like the Muslim Brotherhood and Gaza’s ruling party Hamas, may also be playing some role. Reportedly, Israel and Arab countries have so far not agreed [paywall] on any of the options they’ve discussed.

The situation in East Jerusalem is very much a developing one but incredibly significant. It’s therefore important all eyes remain on the actions of Israel. And that we all push for the appropriate international response.

– Keep abreast of news and action you can take through the Palestine Solidarity Campaign.