The New Statesman accidentally printed some bullshit about Corbyn. So we thought we'd best correct it [VIDEO] - Canary 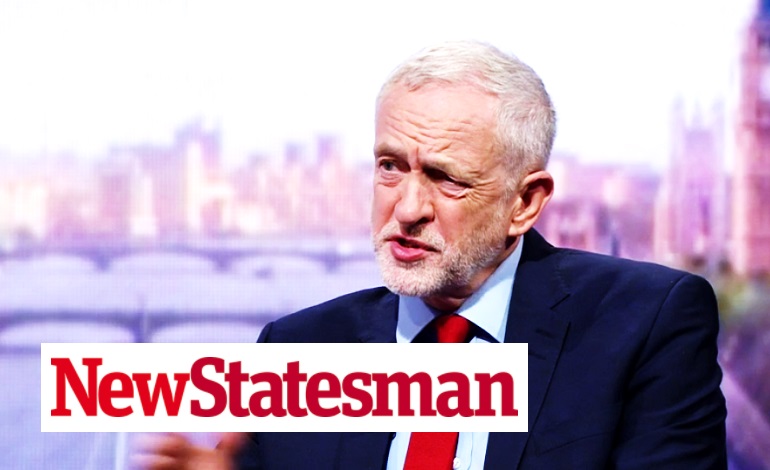 On Sunday 23 July, The New Statesman (NS) published a piece entitled Jeremy Corbyn: “wholesale” EU immigration has destroyed conditions for British workers. But there was a slight problem with the piece: it framed Corbyn’s argument out of context. So The Canary thought we’d correct it for its writer Helen Lewis and The NS…

So far, so good

The BBC‘s Andrew Marr was asking Corbyn about Labour’s stance on the single market and free movement of people. The host said [0.01] that “some of” Corbyn’s “colleagues” had said that, to get a tariff-free trade deal with the EU, the UK would have to accept “some kind of free movement of people”. Corbyn said [0.10]:

So far, The NS reported this correctly; albeit by throwing in arguments for staying in the single market from Chuka Umunna and Nicola Sturgeon, without giving any background to Corbyn’s reasoning for leaving it. But then, Lewis and The NS seemed to have misheard Corbyn.

Laying out the case for leaving the single market, Corbyn used language we have rarely heard from him – blaming immigration for harming the lives of British workers.

At no point in the interview with Marr did the Labour leader blame immigration for “harming the lives of British workers”.

In the actual interview, Corbyn said [0.50] that free movement under a Labour government would be a “managed thing on the basis of the work required”. Marr then said [0.55]:

You wouldn’t be stopping people at the border, asking for their visas?

The Labour leader replied, with no mention of destroying conditions for British workers. Or any workers, for that matter:

But to be absolutely clear, you don’t stop people coming from Latvia or Poland who want to come and work here? You don’t stop them at the airport or border…

They would come here on the basis of the jobs available and their skill sets to go with it. What we wouldn’t allow is this practice by agencies, who are quite disgraceful; the way they do it, [to] recruit a work force, [which is] low paid, and bring them here in order to dismiss an existing work force in the construction industry and then pay them [a] low wage. It’s appalling and the only people who benefit are the companies.

But Lewis and The NS must have popped out to make a cup of tea at this point in the interview. Or they misunderstood Corbyn’s point. Because the article failed to explain what the Labour leader meant; instead just throwing in a tweet by someone else who possibly was away from their TV while Corbyn was speaking:

Corbyn did not, as Lewis and The NS said, blame “immigration for harming the lives of British workers”. His point about recruitment agencies “destroying conditions” and “dismissing an existing work force” should be viewed in the context of his earlier comments. That is, that the “existing work force” Corybn refers to would, under a Labour government, include EU workers already here and those needed for the “jobs available” and who had the “skill sets to go with it”.

Corbyn was making a specific point about recruitment agencies importing workers “wholesale”. A case best summed up by the example of Next.

A Mirror investigation in 2014 found that Next was using a recruitment agency in Poland to find temporary workers for its warehouse. It did this by:

You too can have the NS bullshit straight to your inbox. For only £95 a year.

It is exactly these kinds of practices, that “only benefit the companies”, which Corbyn was referring to. Not immigration per se, as Lewis and The NS spun it.

Interestingly, the article failed to include a link to Corbyn’s interview, or any video extracts from it to back up Lewis’ points. Possibly because it would have shown that she had spun the whole segment completely out of context. For what reason? It can only be speculated upon. But never mind, we at The Canary have now cleared this up. And it’s OK, New Statesman, you don’t have to thank us.

– Join The Canary, so we can keep correcting the mainstream media.