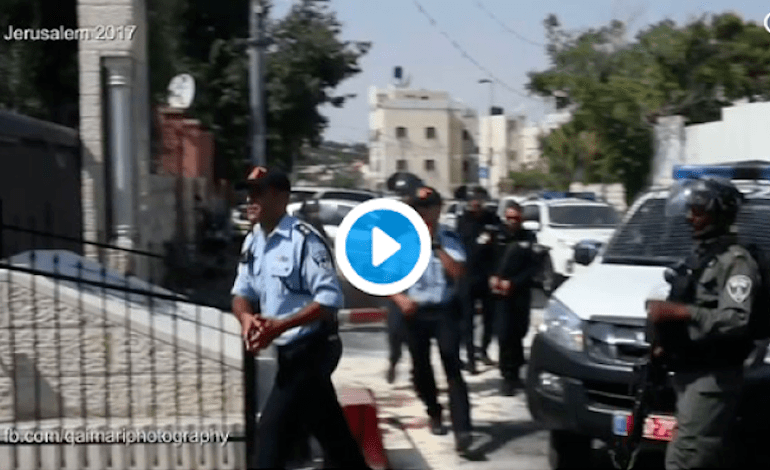 Western media outlets seem to have overlooked a critical statement from a human rights organisation detailing disturbing action by Israeli forces at a hospital in Jerusalem.

On 25 July, Amnesty International (AI) condemned the actions of Israeli soldiers and police who stormed a Palestinian hospital on 17 and 21 July. The organisation said that doctors were prevented from providing medical care and that the incident terrified staff and patients. And it called the raids a “ruthless display of force”.

But there appeared to be little to no coverage of the AI condemnation in major Western media outlets – from The Guardian to The Mail, from The Independent to The Telegraph, and from The Washington Post to Fox News.

The raids took place at al-Makassed hospital in East Jerusalem. Tensions have risen around the al-Aqsa compound (the main holy site for Muslims in the occupied territories) after enhanced security measures were introduced, giving Israel control over its entrance. And as a result, protests and clashes have led to several deaths and 1,090 injuries at the hands of Israeli authorities. Security officials injured in the raids, meanwhile, were reportedly searching for injured Palestinians.

Witnesses described the scenes at the hospital as “absolute mayhem”.

Dr Rafiq Husseini, head of al-Makassed Hospital, told AI that between 20 and 30 heavily armed border guard soldiers and police entered the hospital on 17 July with machine guns and stun grenades.

Hospital director Dr Bassam Abu Libdeh said the soldiers chased one Palestinian, who’d been shot and was bleeding severely, to the hospital. He described them as “hungry dogs after their prey”, saying:

They had long weapons and stun grenades and aggressively pushed and shoved through. They chased the injured youth, who’d been brought into the operating room, when a few of us doctors intervened to stop them…

#Jerusalem| An immediate investigation needed into the breaking in of a Palestinian hospital
Details: https://t.co/BI1djvFpVr pic.twitter.com/5IGIbUtw7e

‘Above and beyond anything seen before’

During the second raid on 21 July, the hospital’s head of reception Talal al-Sayed described the events as “above and beyond what we’ve ever seen”. And he said that around 200 heavily armed soldiers surrounded the hospital and entered forcefully, arresting people in their path and using tear gas:

They invaded the entire hospital… They even entered the neonatal unit… What do they want in there? It was pure terrorization of the patients

He also claimed that soldiers had shoved and hit a doctor who was trying to care for an injured man in the operating room. The man, 21-year-old Mohammad Abu Ghannam, died of his wounds during the scuffle. His body was later smuggled out for his funeral before soldiers could confiscate it.

According to Dr Bassam Abu Libdeh, since protests and clashes broke out, the hospital had received a stream of patients suffering from tear gas inhalation, beatings, and rubber bullet injuries.

And the Palestinian Red Crescent Society has noted numerous excessive uses of violence. This has included 29 with live ammunition, 374 with rubber bullets, 471 from tear gas, and 216 who had been “physically assaulted, burned and run over”.

Israel, meanwhile, is removing the metal detectors they had installed at al-Aqsa compound, which sparked the protests. But it is keeping plans to install cameras. At the time of writing, a boycott on the compound is still in place, which has seen Palestinian Muslims gather and pray outside.

Daily peaceful resistance through prayer on the streets by #Jerusalem #Palestinians shaming the #terror tools of #occupier #Israel. #AlAqsa pic.twitter.com/RML7Z2hP1o

Numerous international organisations are now expressing concern over an escalation in violence. They also say that excessive force and measures that amount to collective punishment will spur on tensions. For instance, after one Palestinian killed an Israeli settler, officials ordered the demolition of his family’s home.

Magdalena Mughrabi from AI has called the raids “deplorable” and said:

Attacks on civilians can never be justified. However, justice for such attacks cannot be achieved through collective punishment of the Palestinian civilian population…

As the occupying power, Israel has a responsibility to protect Palestinian civilians and must respect their right to peacefully protest. They must ensure that their forces limit their use of force in accordance with international law.

The international community has been involved in the conflicts surrounding Israel since its creation 69 years ago. And now, more than ever, all eyes must be on what’s happening in Jerusalem.

– Find out more about the Palestinian Solidarity Campaign; about the Boycott, Divestment, Sanctions (BDS) movement; and see other Canary articles on Palestine and Israel.

– Also, join or support the Stop the War Coalition. Show your support for Veterans for Peace, who are fighting for peaceful solutions to the world’s problems. And take action with the Campaign Against Arms Trade.