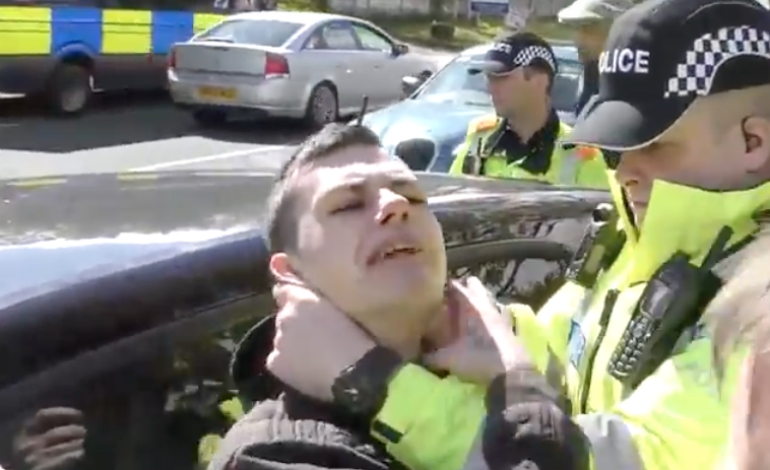 The film focuses on the actions of the police at Cuadrilla’s Preston New Road site in Lancashire, where mostly local campaigners have been attempting to stop the company building a drilling rig. It documents the police violence at the site, including several protesters who have needed hospital treatment. The film shows police throwing elderly protesters to the ground, using pressure points, and tipping a disabled man out of his wheelchair. And it also shows a total inconsistency in the way protests are policed.

Kevin Blowe, coordinator of Netpol, spoke to The Canary about the film:

The testimony and often graphic footage in this film is compelling. Local residents fighting fracking in Lancashire speak about repeated violence and aggression from the police and a complete disregard for their human rights.

You can watch the film here:

One issue that stands out the most in the film is the level of violence used against protesters. Superintendent Robert Robertshaw from Lancashire Police spoke about the protests:

The vast majority of protest activity has been highly disruptive and it tends to involve lock-ons, blocking the road, blocking the site. But it is not violent. And I think that is generally very much the intention of the protesters. Not to offer violence, not to be threatening, but to cause disruption to Cuadrilla’s activities.

But as this film shows, this is not reflected in the policing. From the opening scenes of a young man screaming in pain from being pressure-pointed in the neck, to a woman speaking of being knocked to the floor unconscious, the level of violence used against protesters is clear.

As local resident Maria Allen says in the film:

I want the police to stop brutalising us.

“We don’t know what to expect”

The film also shows the erratic nature of the policing operation. One local woman described not knowing what would happen from one hour to the next. And she described how protesters can do one thing one day and be left alone and the next day be thrown to the floor and pushed around for doing exactly the same thing.

Solicitor Lydia Dagostino believes there are serious consequences to this behaviour:

If there’s an element of randomness in who is arrested, it can be off-putting for people to turn up because you simply don’t know if you’re going to be arrested on a particular day for doing something that was allowed yesterday.

And Dagostino asserts that this can prevent people from taking part in protest and that it could be seen as a deliberate policing tactic:

If they think that they’re going to turn up and there is going to be a risk of arrest, it might put them off from going. Effectively, I don’t think the police would ever admit there’s strategies involved, but it can certainly feel like that for activists.

Like much of the wider anti-fracking movement, a majority of campaigners at Preston New Road are women, and it is they who have most often faced injury and have been hospitalised as a result of police aggression. If this is intended to send a message to back down from disrupting Cuadrilla’s operations, it isn’t working.

In fact, as the film shows, police violence has led to an escalation of tactics. Allen, who was involved in walking slowly and legally in front of lorries, is interviewed lying outside the gate with her arm down a tube to prevent the police removing her. She states:

Ultimately, the police tactics at Preston New Road raise fundamental questions about the right to protest. And campaigners believe the actions of the police breach human rights law and are illegal. Blowe stated:

The police always assert that they must strike a balance between the rights of protesters and others. Human rights law is, however, very clear – that balance should always fall in favour of the right to protest unless there is strong evidence for interfering with protesters’ rights.

Inconvenience or disruption alone are not sufficient reasons for doing so, and the senior officer in charge of the operation acknowledges in the film that protesters are not violent.

There is significant evidence, which this film highlights, that Lancashire Police is therefore completely ignoring its legal responsibilities.

Blowe also asserts that, while it has put some people off protesting, it has made others even more determined to express their views:

It has left some fearful of taking part in protests – and others more determined than ever to make sure their freedom of expression and assembly are not taken from them.

There is a fundamental right to protest in this country. But the actions of the police against these local campaigners show how little respect Lancashire Police seem to have for these rights. And there is no excuse for these levels of violence being used against what even a senior police officer describes as “not violent” protesters.

But it is also important not to be intimidated by these tactics. In the film, there is a banner which makes the comparison between policing at Preston New Road and at the infamous ‘Battle of Orgreave’ during the miners’ strike. A 2015 BBC article also referenced Orgreave as it claimed that public protest could cause the UK fracking industry to stop before it has started. Those opposing fracking in Lancashire and elsewhere will certainly hope their efforts bear fruit. Campaign group Frack Off describes fracking as a “nightmare” that could cause:

Toxic and radioactive water contamination. Severe air pollution. Tens of thousands of wells, pipelines and compressor stations devastating our countryside and blighting communities. All while accelerating climate change. And to produce expensive gas that will soon run out.

Local residents and campaigners from across the country have been doing an incredible and heroic job at Preston New Road. But fracking is an issue that affects all of us. We all need to get involved. And we need to show that this repression of protest will only lead to more people taking action and showing we will not be deterred by their tactics. The issues are too serious to do anything else. Enough is enough!

– Find out more about fracking.