The media uses foreign governments to attack Corbyn, but one of May's closest allies is an alleged war criminal - The Canary 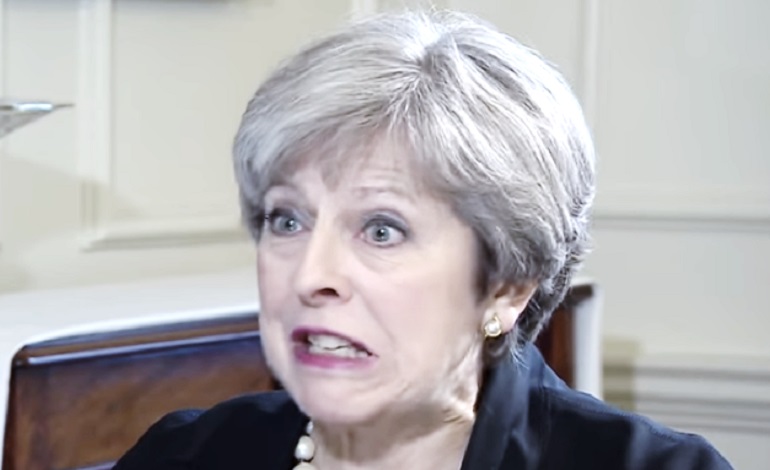 Britain’s right-wing tabloids have been trying to use a crisis in a foreign country to attack Jeremy Corbyn. But that exposes their blatant hypocrisy. Because one of Theresa May’s closest allies is an (alleged) war criminal.

Turkish President Recep Tayyip Erdoğan is under threat of prosecution for genocide, crimes against humanity, and war crimes; and also because of growing awareness of how Universal Jurisdiction rules could see his arrest anywhere in the world.

A prosecutor in Sweden is currently examining whether Erdoğan, as well as Turkey’s prime minister Binali Yildirim, should be charged with various crimes. This follows a damning report in March by the UN High Commissioner for Human Rights; a report that claims that, over an 18-month period until December 2016, an estimated 1,200 local residents in Kurdish communities lost their lives as a result of aggression by the Turkish state.

Indeed, many Kurdish-populated cities were essentially destroyed by the Turkish military: 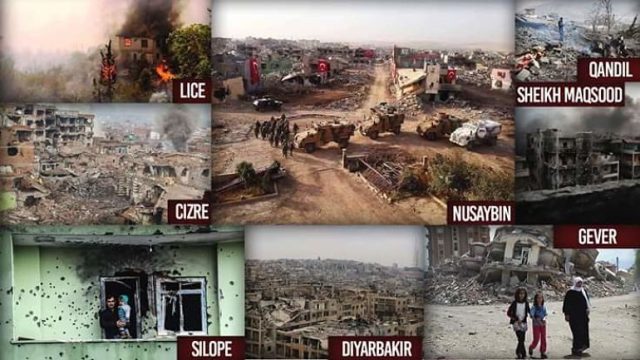 Whether or not the prosecution proceeds, the Turkish president can still be arrested and charged under the principle of Universal Jurisdiction. This can happen anywhere, at any time, during any of his foreign visits. And this may explain in part the overly aggressive response of Erdoğan’s armed bodyguards when confronted by a small and peaceful protest in Washington.

Universal Jurisdiction (UJ) enables states or international organisations to prosecute someone, regardless of where the alleged crime took place, or of the accused’s nationality and country of residence.

A high-profile example of this was when renowned jurist Baltasar Garzón issued an arrest warrant against former Chilean dictator General Augusto Pinochet (another ally of the Conservative Party). At the time, Pinochet was visiting Britain, but was forced to take refuge in the Chilean Embassy. He eventually avoided custody due to the direct intervention of then Foreign Secretary Jack Straw.

In Erdoğan’s case, he could be issued with an arrest warrant by a representative of any recognised state; by a body such as Human Rights Watch or Amnesty International; or by a judge in a country where a citizen, or a close relative of a citizen, suffered as a result of Erdoğan’s policies

And of course, there is always the last resort: a citizen’s arrest (bodyguards not withstanding).

A ‘staged’ coup to justify a purge?

Earlier this year, another report suggested that Erdoğan had staged the July 2016 ‘coup’ in Turkey as an excuse for the purge that immediately followed. Subsequently, “NATO sources” reportedly said:

If the Turkish Armed Forces wanted to carry out a coup, they would have succeeded. That’s a tradition in Turkey. They had a list of 1,600 names the very next day of people they wanted gone.

Then, in July 2017, the Stockholm Freedom Center published a report [pdf, Turkish] that comes to a similar conclusion.

In the immediate aftermath of the coup, Erdoğan escalated a purge against all his opponents. This continues today, with current estimates showing around: 57,000 people arrested, 123,00 people jailed, 145,000 people sacked from their jobs, 4,400 judges and prosecutors dismissed, and 150 media outlets shut down. Mass trials are currently underway.

Is Turkey a threat to the US or NATO?

All this comes at a time when Turkey’s relations with the US and NATO are at an all-time low.

In July, the Turkish government released details to the pro-Erdoğan press, via its state-funded news agency, of secret locations of US military bases in Syria. The details included numbers of US special forces operating from these bases.

The bases are used to support the Kurdish-led fight against Daesh (Isis/Isil) in northern Syria.

The Pentagon was furious about the leak. And Aaron Stein, a fellow at the Atlantic Council in Washington, said it was “hard not to see this as a F-you”.

And then there have also been numerous allegations of collusion between Turkey and Daesh. For example, there is substantial evidence [pdf] that suggests Turkey has previously provided military supplies to Daesh. Further evidence [pdf] indicates close links between Daesh jihadists and Turkey. Indeed, the Turkish daily Today’s Zaman (now closed by the Turkish government) reported [page removed] that “more than 100,000 fake Turkish passports” had been given to Daesh members.

Also, official documents of the Turkish military were leaked online. These showed how Turkey’s intelligence services (MIT) were caught transporting missiles, mortars and anti-aircraft ammunition “to the al-Qaeda terror organization”.

Western governments want to talk foreign policy. How about they start with Turkey?

The evidence is stacked up against Erdoğan’s regime. And its reputation in Europe and elsewhere is in tatters. But Erdoğan attempts to deflect criticism through his ongoing war on Kurdish-led forces in Rojava (northern Syria). These forces, now with strategic US support, are a major part of the front-line battle against Daesh in Syria; and the US reportedly has at least 300 soldiers supporting them.

Had Turkey continued to pursue peace talks with imprisoned PKK leader Abdullah Ocalan, not locked up the country’s moderate Kurdish leaders and opened a dialogue with the YPG, they might have even joined forces against IS, and relations with the United States would not have been so badly frayed.

But that didn’t happen. And because Turkey is so important to the West, NATO, and international arms dealers, it has so far got away with its behaviour.

Erdoğan, meanwhile, is busy adopting greater powers for himself; threatening to re-introduce the death penalty; and cosying up to Russia. And the relative silence of Western governments is telling; even more so when they insist on talking about other countries in the world whose problems are much less serious.

– Ask Theresa May and your MP to urge the Turkish regime to resume peace talks with its Kurdish communities; to respect freedom of speech and human rights; and to stop attacking anti-terrorist forces in Syria. Also ask the UK government to stop putting business before human rights in Turkey, and to follow in Germany’s footsteps by suspending arms deliveries to Turkey.