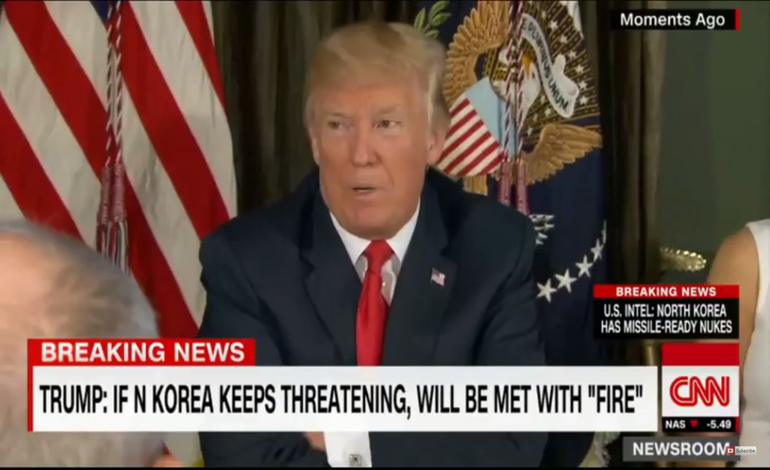 Donald Trump has just put millions of people on high alert after his latest outburst. He left North Korea with no doubts about his next move should it attempt to launch any more missile tests.

The latest threats follow a ramping up of tensions since Trump’s inauguration, and reports that North Korea has created a nuclear warhead that can accommodate an international ballistic missile (ICBM).

Trump made the threat during a conference in New Jersey earlier this week, following a question from a journalist regarding North Korea. Trump said:

North Korea best not make any more threats to the United States.

But it gets worse. Much worse.

They will be met with fire, fury and, frankly, power – the likes of which this world has never seen before.

Not so long ago, however, the US President was keen to point out the disadvantages of foreign conflict. And his gung-ho approach in Syria has already attracted criticism from his base, and this move could dent his popularity. This should come as no surprise, though; Trump also recently seemed to change his stance on Saudi Arabia following a multi-billion-dollar arms deal.

North Korea responded promptly, threatening to strike Guam (a US military base in the West Pacific) which hosts up to 6,000 US soldiers, with the US military controlling a third of the land. The Korean People’s Army issued a statement warning the US with a chilling caveat:

Immediately stop its reckless military provocation against the state of the DPRK (Democratic People’s Republic of Korea) so that the latter would not be forced to make an unavoidable military choice.

The UK government has agreed with the sanctions so far, calling for them to be implemented swiftly and robustly. But many of us will be waiting to see who makes the next move in this stand-off.

Neighbouring Japan and South Korea are now in search of stronger artillery in response to the tensions. If the US strikes first, North Korea could hit back with literally thousands of weapons, almost certainly striking US ally South Korea. This would undoubtedly cause thousands of deaths and become a fresh crisis for politicians worldwide. And as former Harvard University professor Ash Carter has said regarding another possible US war in North Korea:

With all of the conflicts already raging in the world today, a return to the 1950s – with full-blown war on the Korean peninsula – is the last thing we need right now.

– Join or support the Stop the War Coalition; and show your support for Veterans for Peace, who are fighting for peaceful solutions to the world’s problems.