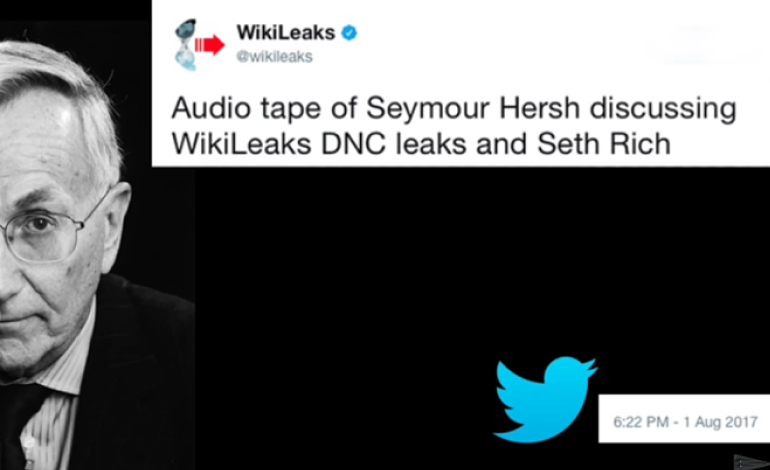 Forensic evidence has come to light, meanwhile, suggesting Russia was not directly involved in the alleged hacking of those emails; which revealed that officials improperly interfered in the Democratic primaries to undercut Clinton’s chief rival, Senator Bernie Sanders, and much more.

Rich was murdered in July 2016. Just days later, WikiLeaks published the DNC emails. And as The Canary previously reported, WikiLeaks founder Julian Assange subsequently offered a reward of $20,000 for any information regarding Rich’s death. But in an interview with a Dutch television service, Assange continued to uphold WikiLeaks‘ policy of refusing to name a source, even if that source is dead.

In May 2017, as The Canary also reported, cyber entrepreneur Kim Dotcom claimed he had evidence that Rich was the source of the leaks.

Now, Pulitzer Prize-winning journalist Seymour Hersh, who first released news of the My Lai massacre (Vietnam War), has waded in. Hersh was secretly recorded by Ed Butowsky, a wealthy Republican donor with ties to Breitbart. However, the recording is available without Hersh’s approval.

The interview was first published by a reportedly ‘alt-right’ website, “Big League Politics”. Then, earlier this month, WikiLeaks posted a link to the audiotape on Twitter.

In the recording Hersh says:

some time in late Spring… he [Rich] makes contact with WikiLeaks. That’s in his computer… Anyway, they found what he had done. He had submitted a series of documents — of emails, of juicy emails, from the DNC.

Hersh explains that it was unclear how the negotiations went. But he adds that WikiLeaks obtained access to a password-protected Dropbox where Rich had deposited the files. And he says his contacts in the FBI are adamant that the emails were the subject of a leak by Rich. Hersh does not claim, however, that Rich’s death was down to him being the alleged source.

Since the recording was made public, Hersh has been more ambivalent, saying: “[Butowsky] took two and two and made 45 out of it.”

Here is a rough transcript of the recording.

Earlier this month, as The Canary reported, CIA veteran Ray McGovern claimed that the allegations that the DNC emails were the result of a hack by Russia were nonsense.

And former US intelligence officers, including NSA specialists, cited ‘forensic studies’ to challenge the claim that the Democrats’ emails were hacked by Russia. A very detailed analysis by The Forensicator, meanwhile, states that a USB drive was likely used to boot Linux OS onto a computer that contained the DNC files or had direct access to them. It also argues that the ‘hack’ claimed by Guccifer 2.0 was conducted via a computer based on the east coast of the US. After further analysis, Adam Carter (associate editor of right-leaning Disobedient Media) suggests that the Guccifer 2.0 operation created files with fake “Russian Fingerprints”.

In the memo, they state:

After examining metadata from the “Guccifer 2.0” July 5, 2016 intrusion into the DNC server, independent cyber investigators have concluded that an insider copied DNC data onto an external storage device.

But crucially, they add:

Based mostly on the cumulatively unique technical experience of our ex-NSA colleagues, we have been saying for almost a year that the DNC data reached WikiLeaks via a copy/leak by a DNC insider (but almost certainly not the same person who copied DNC data on July 5, 2016).

(1) an inside leak to WikiLeaks before Julian Assange announced on June 12, 2016, that he had DNC documents and planned to publish them (which he did on July 22) – the presumed objective being to expose strong DNC bias toward the Clinton candidacy; and (2) a separate leak on July 5, 2016, to pre-emptively taint anything WikiLeaks might later publish by “showing” it came from a “Russian hack.

We do not know who or what the murky Guccifer 2.0 is. You may wish to ask the FBI.

Questions now remain about the Hersh recording. For example, is it genuine and is it unedited? If so, the veracity of the Russian hacking theory needs further examination.

This is clearly still an evolving story.

– See other Canary articles about Donald Trump, WikiLeaks, and Seth Rich at The Canary Global.