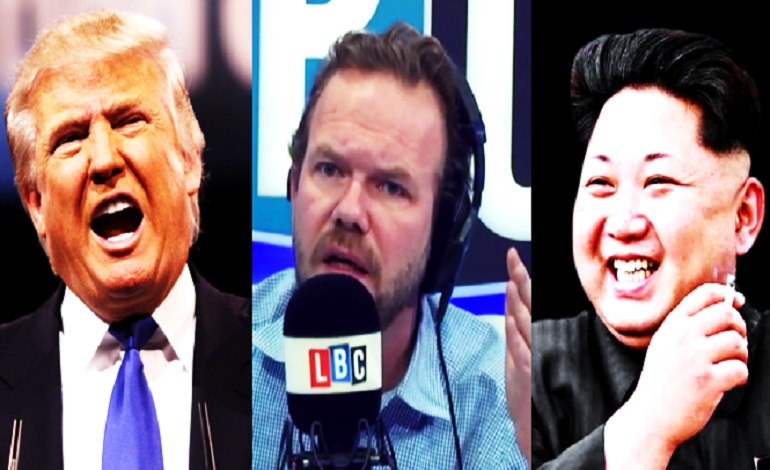 As all eyes focus on the developing situation between the US and North Korea, LBC host James O’Brien has given what is perhaps the best analysis of the current stand-off. And it’s one that politicians and the public alike could all do with listening to.

Currently, the US and North Korea are in a political and military stand-off that has been developing for months. In April, Trump ramped up the pressure first by threatening intervention and then by sending the USS Carl Vinson to the western Pacific. Meanwhile, Kim Jong-un has allegedly been increasing the number of missile tests, with reports speculating that North Korea has now developed nuclear warheads small enough to fit in a missile.

This has led President Donald Trump to use particularly strong rhetoric, at one point warning that the US would unleash “fire and fury” on North Korea. Consequently, Jong-un is reportedly considering firing missiles at the US territory of Guam in the Pacific Ocean.

But with the world watching the developing situation, O’Brien took to the radio to make his views clear. And he didn’t mess around in his analysis.

Who are the good guys?

O’Brien began by saying [0.01] that Trump had “embarked upon an ego trip of such epic and international impact that we should all be very, very scared”; asking the listener to provide “epic” evidence to show he’s not. He also admitted he didn’t know much about Jong-un and North Korea, apart from that the leader would apparently “knock off anybody who displeases him”.

Who’s even the good guy? … Do we have to get into bed with America if Donald Trump does decide to undertake military action against North Korea; or if he has to respond to military action that North Korea undertake because he’s provoked them? Do we have to get involved in that, because we’re so desperate to be in bed with America for trade reasons, post-Brexit? That’d be great, wouldn’t it? Brexit leads us into a nuclear war…

O’Brien then went on to discuss Trump’s approach to nuclear weapons. He said [1.44] Trump couldn’t grasp why the US had nuclear weapons when they wouldn’t use them:

So this little sort of man-child brain can’t process nuanced thought, can’t do complicated sophisticated thought. Actually, scratch complicated and sophisticated. He can’t really do thinking… Half a page is about the limit of his attention span…

The LBC host was basically saying that Trump couldn’t get his head around the idea of nuclear weapons being a deterrent.

And on the subject of whether he thought there could be nuclear war, O’Brien was fairly unequivocal [2.30]:

No regard for any life but his own

But it was O’Brien’s final words [3.07] on Trump which perhaps best sum up the current situation:

And I think [Trump’s] regard for human life, any human life except his own, seems to be… twisted to a point where I find it terrifyingly plausible that our oldest ally… is led by a man who I think is probably perfectly capable of starting a war just to satisfy his own ego and distract the American people from the… epic corruption and collusion at the heart of his administration.

If those governments around the world which claim to promote democracy should listen to anything, a good place to start would be O’Brien’s speech. Because what the world needs now is not more phallic posturing, but leaders to come together to diffuse the situation. And they must also not only rein in Trump, but begin asking how much longer this man should remain President of the US.

– Join or support the Stop the War Coalition; and show your support for Veterans for Peace, who are fighting for peaceful solutions to the world’s problems.

– Join The Canary so we can keep bringing you the analysis others don’t.