While Theresa May is enjoying her summer holiday, her party is planning Christmas misery for thousands - Canary 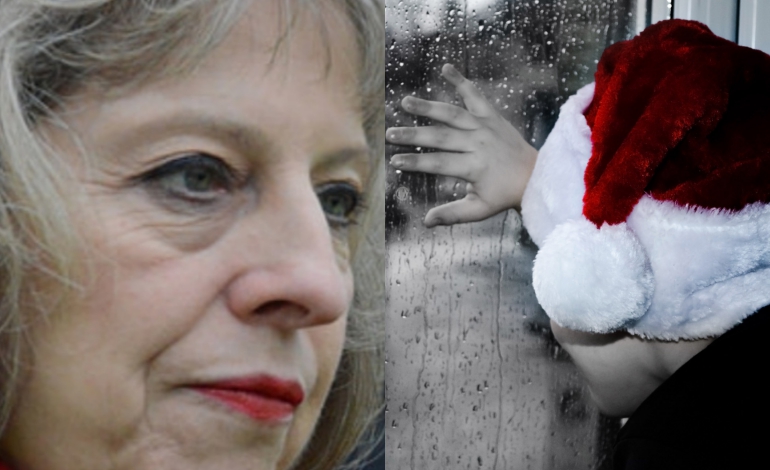 While Theresa May has been enjoying her summer holiday, Conservative MPs are planning Christmas misery for thousands. 31 MPs have written to the government urging it to change its plans to roll out Universal Credit (UC) during November and December.

The MPs believe, with good reason, that the expansion of UC into around 50 new areas will cause unnecessary hardship at a time when many families are already struggling financially.

Published in The Guardian on 6 August, the letter sets out the concerns the MPs have for their constituents:

There is a real worry that the introduction of UC at this time will cause extreme hardship for many people in vulnerable situations, exacerbated by the financial burdens of the festive period.

It also outlines some of the existing problems with UC:

In many cases, recipients have had to wait seven weeks for payment of the benefits. This puts an incredible strain on individuals and we have seen in other areas an increased use of food parcels during this period. There are also issues around the removal of the severe disability premium, which leaves many disabled people in a precarious position.

And the letter ends by urging the government to delay the planned roll-out of the benefit:

Meanwhile, MP Laura Pidcock, one of the letter’s signatories, issued a direct challenge to Gauke:

I have no intention of sitting by while this Government pushes my constituents into further debt and more misery. I haven’t been elected to accept the status quo, so I hope the Minister realises that we will be keeping him very busy indeed.

And Pidcock explains why she believes the Tories have such little understanding of the impact of the changes:

Never having experienced poverty nor seemingly able to show much empathy for those that have, it’s not surprising the Tories have got it wrong again.

Christmas at the food bank

Figures from the Trussell Trust, which runs 400 food banks across the country, back up this picture of the misery and poverty caused by UC. According to the trust’s figures, food bank referrals rose to 16.85% in areas where UC has been fully implemented; more than double the national average.

The trust also points out some of the reasons why UC causes such hardship. These include a wait of six weeks or more for the first payments and using an online system that can be difficult for some people. And the trust also highlights that seasonal and insecure workers are particularly affected.

It’s time to admit that UC is an expensive failure. Rolling out the scheme to thousands of people who are already struggling, just when money is tightest, is cruel to the extreme. The whole scheme needs scrapping before more families are forced further into debt and poverty.