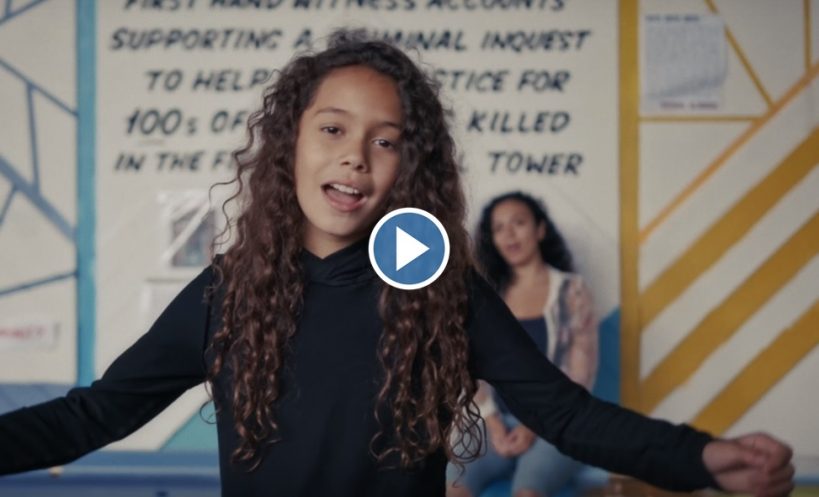 Rapper Lowkey was a witness at the Grenfell Tower disaster on 14 June.

After the tragic event, he insisted that people simply “didn’t have to die”. And he laid the blame firmly at the door of Britain’s current political establishment.

At the start of the song, Lowkey utters the phrase “the night our eyes changed” – an apparent reference to the effect the tragedy has had on witnesses, survivors, and family members of the deceased. And with the line “political class – so servile to corporate power”, the song clearly sets itself out as a message for the corporate-political establishment. A line in the chorus also hammers that message home: “this corporate manslaughter will haunt you, now hear ’em scream”.

The penultimate sequence of the video [from 3:58], meanwhile, is directly addressed “to whom it may concern at the Queen’s Royal Borough of Kensington and Chelsea”.

‘Grenfell is a symbol’

One line in particular from the song is a rallying call for change:

Words cannot express – please allow me to begin, though,

People crying in the street, watching the burning of their kinfolk,

In late July, police said there were “reasonable grounds” to suspect that the Royal Borough of Kensington and Chelsea and the Kensington and Chelsea Tenant Management Organisation “may have committed the offence of corporate manslaughter”. And now, while Director of Public Prosecutions Alison Saunders says it could be months before charging decisions are made, she also admits that the possibility of criminal charges with lengthy prison sentences has not been ruled out.

At least 80 people died in the Grenfell tragedy, and authorities are still in the process of formally identifying victims’ remains. But questions continue about why residents’ past requests and concerns reportedly “fell on deaf ears”; how justice has become more and more inaccessible for ordinary people; why councils are outsourcing important work to profit-making corporations; why the government has been enabling such profiteering; and how neoliberal politics have worsened Britain’s chronic housing crisis.

In the wake of the tragedy, Lowkey said:

The way I see it, it has to be the death knell of the Theresa May government. Neoliberalism is discredited. Austerity is discredited. It is a political choice. It doesn’t have to be this way. And it is a matter of life and death.