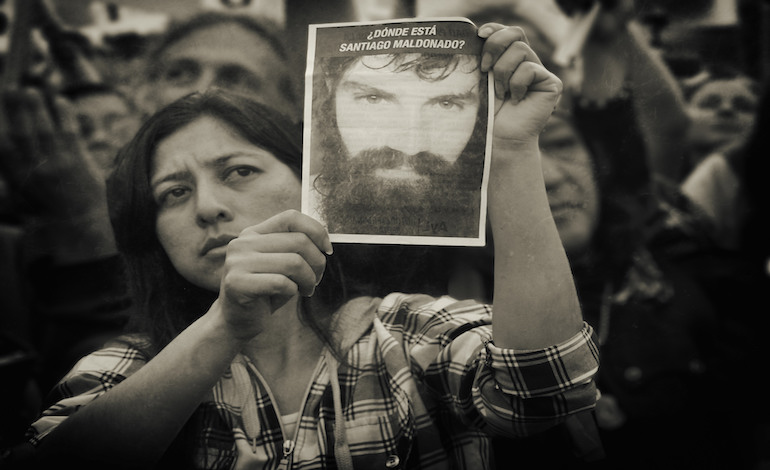 The alleged murder of a backpacker in Argentina recently sparked public outcry. But the British government and others have responded with a chilling silence.

The family of the deceased Santiago Maldonado has accused the Argentinian government of being responsible for his death. Maldonado’s brother Sergio said [Spanish]: “They murdered him. It’s a forced disappearance.” The 80-day disappearance and recent discovery of Maldonado’s body have led to outrage and mass protests across Argentina. In fact, this outcry led to the suspension of congressional elections across the country.

One activist has now spoken to The Canary, calling on governments like Britain’s to put more pressure on Argentina regarding this case.

The death of 28-year-old Santiago Maldonado brings Argentina’s dark history of state-sponsored ‘disappearances’ and murder back into focus. The 1976-83 military dictatorship disappeared [Spanish] an estimated 30,000 people. Argentina’s current government, led by millionaire President Mauricio Macri, has repeatedly tried to downplay the crimes of the dictatorship.

The grieving Maldonado family reportedly believes that the present-day government is guilty of a state-sponsored ‘forced disappearance’. The government has denied any involvement.

Maldonado’s body was found on 18 October near to where he was last seen. He’d been taking part in a protest defending the rights of the indigenous Mapuche community in the southern region of Patagonia when police arrested him. Witnesses say that, when the police detained him, he said: “Please stop hitting me. I already surrendered.” The police then allegedly loaded Maldonado onto a truck.

“The police planted the body”

The Canary spoke to the Bristol-based Mapuche International Link, which works to “promote the interests of the indigenous peoples of Chile and Argentina”. General Secretary Reynaldo Mariqueo said:

Santiago Maldonado [was an Argentinian person]… who sympathised with the cause of indigenous people… his brother [Sergio] went to the river [where the body was found] with members of the indigenous community looking for Santiago… they were sure that there was nothing in the water and then a body appeared like magic… they believe the police planted the body there.

The Canary approached Argentina’s federal police for comment, but had received no reply by the time of publication.

International NGOs have expressed grave concerns about the Maldonado case. They have called for the right of peaceful protest and for greater government transparency.

According to Amnesty Argentina, “the mistreatment of the family by the government is astonishing”.

I think they are very perverse, it is very low… I see him [Argentina’s Justice Minister Garavano] and President Macri saying they spoke, when they never cared about us. [Macri] calls my [mother] two days before the election, it’s very low, they make me sick. They use things politically…

Former Argentinian president Cristina Fernández de Kirchner has accused the current government and the national media of a cover up.

The silence of the British government

The mainstream British media has reported on the Maldonado story, including coverage from the BBC and The Guardian. But the British government has been conspicuous by its apparent silence.

The Canary asked the UK Foreign Office for comment, but received no reply.

Mariqueo told The Canary what he would like to see the British government do:

Through the United Nations Human Rights Council, they could put some pressure [on the Argentinian government]

It is perhaps no surprise, however, that the UK government has chosen not to respond to requests for comment. After all, Chancellor Philip Hammond was recently in Argentina, and he met with President Macri to discuss “how we can deepen the UK-Argentina economic partnership”. He was the first cabinet minister to visit since 2001. And his trip came at a time of increasing tension and inequality in Argentina, with 1.5 million people having fallen into poverty and the seven wealthiest Argentinians having doubled their fortunes. All since Macri took office in 2015.

The UK Conservative Party has its own questionable record on human rights, coming in for heavy criticism from the UN. And from arms sales to brutal dictatorships around the world to ‘economic partnerships’, we have seen that money talks for this Conservative government. And it certainly won’t allow the suspicious disappearance and death of an innocent man to get in its way.

– Ask your MP to put pressure on Argentina to assure justice for Santiago Maldonado and his grieving family.