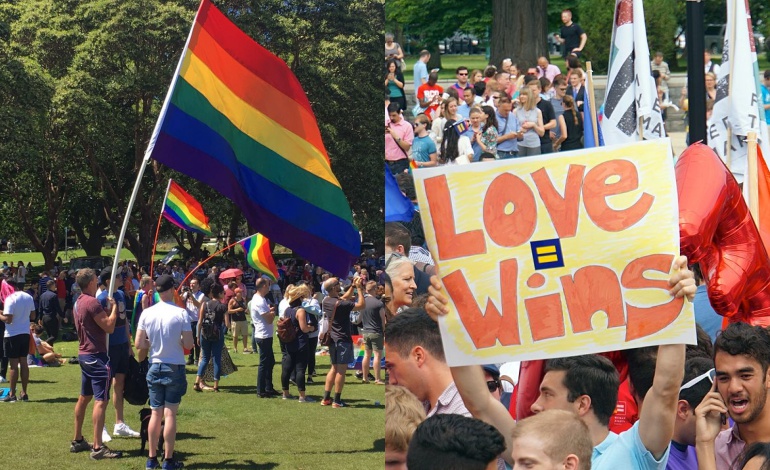 Following a national postal survey, Australia has voted ‘yes’ to allowing same-sex marriage. In an overwhelming victory, 61.6% of the population answered yes to this question: ‘Should the law be changed to allow same-sex couples to marry?’ Although the vote is non-binding, there is reportedly a feeling of “elation” in Australia, and a sense that it heralds a victory over attempts from the far right to influence the lives of potentially millions of people. One Australian citizen spoke to us about this situation.

Victory despite undercurrents of intolerance in Australia

Talking exclusively to The Canary, Toby Hemming (creative “guru” for mental health charity RUOK? in Sydney) explained how this vote revealed “the internal dark heart of politics” in Australia:

Like many countries, there’s a hard nationalist, religious right here who have more power than they should do and have been trying to influence politics. Neoliberalism is an experiment that failed. But the worst members of the so called ‘religious right wing’ are desperate to hold onto a fictionalised version of their youth.

He explained that, although there is huge relief in Sydney – which has “one of the biggest gay communities in the world”, there are still questions to be asked:

There is still a really nasty undercurrent. Intolerance is intolerance no matter what. People have spoken, which is good. But I think we’re at the beginning of a journey. And it’s also a journey that never should have happened. This was a A$120m vote that went out to the people and is actually non-binding.

One of the main advocates behind the ‘no’ vote was former prime minister Tony Abbott. Called “one of the world’s most hated prime ministers”, Abbott generated the #MorePopularThanAbbott meme. And he recently stated that “climate change could be doing good”.

There is a sense in Australia that the ‘yes’ vote was a vote against Abbott-style politics. As Hemming said:

There’s a nasty right-wing element that masquerades under religion here because they think that’s something no one can take a ‘pop’ at. But at the end of the day, it’s the old, white, middle class hierarchy trying to hold on to their roots.

Abbott’s daughter and sister openly supported the ‘yes’ campaign. And now the votes are in, his sister can marry her girlfriend. But as Hemming said, although there is a sense of “elation”, it is bittersweet:

There were street parties last night. This weekend is going to be massive. And Mardi Gras in March will just be off the chart. But there’s [also] a bit of sadness, because it never should have happened. There are gay rights activists here who have been sacked and put in prison for 20 years. This is the fruition of a long, long, long thing.

Hemming said there were genuine fears ahead of the result that Australia might have “a Brexit or Trump moment”. And although “common sense prevailed”, he said:

This never should have happened. Love is love. And anyone under the age of 65, who is not hard right-wing Christian, thinks it’s ridiculous.

But there is still a long way to go towards equality. As The Canary has reported, Australia’s treatment of asylum seekers and refugees has drawn widespread criticism. And Hemming said:

Australia is very racist and it’s very divided. It’s polarised; you’re either ‘one thing’ or you’re ‘another’. So there’s far less ‘middle ground’ than there is in the UK.

But many Australians are hopeful that this vote can start a political shift. And there is huge confidence in young people to drive this forward.

“If you don’t like men marrying men, then don’t marry one”

Hemming said he’s confident that the vote reflects positive change for future generations because “no one is born with prejudice, it’s taught”. He explained:

I’ve just spoken to a friend who proposed to his boyfriend today. He said to me, ‘when I was growing up, I was in the closet and it caused so much mental anguish’. This is a massive thing, especially for young people, who don’t feel confident being ‘out’ about their sexuality. This vote is important. If you look at the rates of suicide in US states after gay marriage was legalised, they went down massively.

Hemming said that the only confusion for most children and young people seemed to be why the vote was needed at all, even among children “with ultra conservative parents”. And he explained:

As my daughter Alice, who is nine, said: ‘Surely if you don’t like men marrying men, then don’t marry one’.

– Support LGBT equality in the UK.