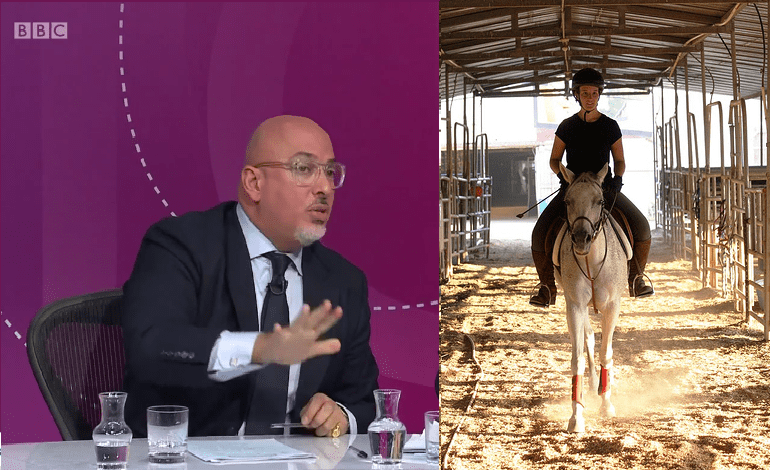 On BBC Question Time on 16 November, Conservative MP Nadhim Zahawi was defending [47.00] his government’s austerity programme. But many viewers were quick to point out that the MP for Stratford-on-Avon himself has been quite liberal with taxpayer money.

In fact, multi-millionaire Zahawi claimed expenses for the electricity used to run the horse-riding stables on his estate:

The Tory MP on #bbcqt tonight was caught out trying to claim expenses to heat his horses stables.
He strongly believes that people on universal credit should wait 6-weeks for money to heat their homes..

At the time, Zahawi insisted that the filing was a “mistake” and promised to pay back the money. The MP claimed the expense in 2013, three years into the Conservatives’ austerity programme.

Still, Zahawi had no problem defending [47.26] that programme on Question Time, claiming:

Despite the fact that even former Tory chancellor George Osborne recently admitted that Labour didn’t cause the 2008 financial crash.

The poorest and most vulnerable people hit hardest by austerity

Zahawi, who also founded YouGov, will not notice the impact of Conservative austerity on his life. In fact, he’s making money from his own government’s reductions in public spending. On top of his parliamentary salary, Zahawi also rents out a number of commercial properties earning him hundreds of thousands annually. So the Conservative MP is essentially profiting from his own party’s cuts to spending on house building; because starving the supply of housing increases rent prices.

Meanwhile, yet another report into the impact of austerity, released on 17 November, shows the poorest and most vulnerable people will be hit hardest by continuing austerity. The report, by the Equality and Human Rights Commission (EHRC), found that women face losing double that of men; and that black families face losing double that of white families, because of the cuts still to come. Chair of the Commission David Isaac said:

The Government can’t claim to be working for everyone if its policies actually make the most disadvantaged people in society financially worse off. We have encouraged the Government to carry out this work for some time, but sadly they have refused. We have shown that it is possible to carry out cumulative impact assessments and we call on them to do this ahead of the 2018 budget.

In contrast to the losses of ordinary people, Zahawi is making a killing from the housing crisis, fuelled by his own party’s policies. And he still apparently thought the taxpayer should fund his stables. The man should hang his head in shame.

-Fight back with the People’s Assembly Against Austerity.