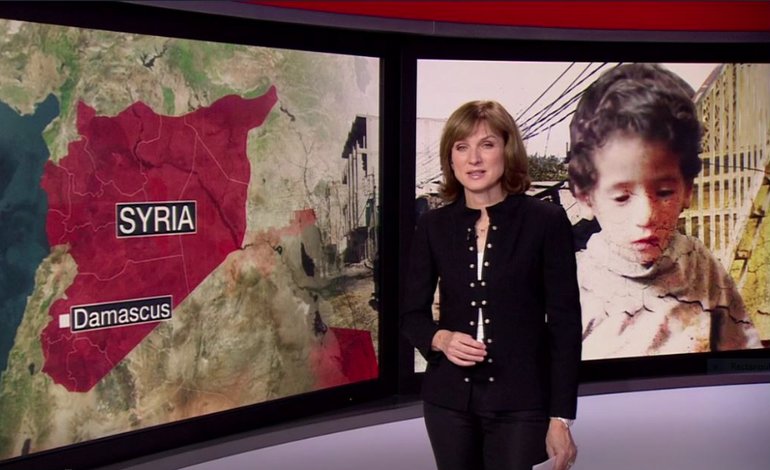 BBC News at Ten has a problem. And so does BBC News in general. It manifestly fails to present a balanced account of global conflicts where the US or UK have vested interests. And as the US and UK have some stake in almost every global conflict, this is a very big problem.

On 8 January, BBC News at Ten covered the devastating conflict in Syria. And host Fiona Bruce referred to Syrian government forces being backed by Russia. This happens often in theatres of war where Russia has an interest. Think Ukraine, Georgia, and so on. But as Media Lens pointed out that night, rarely is the same approach taken in reverse; when the superpower influencing events is the US or UK.

Media Lens granted the BBC right of reply, calling on editors to explain the behaviour. Crickets.

Why won't the editor of BBC News at Six and Ten, @paulroyall, and the @BBCNews foreign editor, @AndrRoy, respond to huge public concern about biased @BBCNews reporting? #Yemen #Syria https://t.co/5z9UilxKuQ

And this is the BBC’s general response to such criticism. Silence, or the standard claims of impartiality. Despite such claims, Syrian BBC anchor Dima Izzedin quit in 2016 – citing the broadcaster’s failure to uphold standards of impartiality when covering the conflict. She said:

The standards adopted by this great institution are supposed to make it first class in media, but this [is] not the case…

Unfortunately, these standards are no longer applied as [they] should be. Eventually I took from the BBC… today I leave it as it is no longer like me nor am I like it. The news on my wounded homeland departed us.

Speaking at a Real Media event on ‘Media bias and big political events’, the University of Glasgow’s Greg Philo explained the seemingly rightward shift of BBC News coverage. He traced it back to the rise of Blairism and the invasion of Iraq. From then on, conversations in parliament were based on a near-universal acceptance of neoliberalism, in both domestic and foreign policy. And as the BBC saw its role as providing balanced reporting of those views, they failed to make space for broader discussions. As Philo explains [0.49]:

The BBC, which is supposed to be public – supposed to be representing a range of views, interprets its rubric as being simply to report what goes on in parliament. So if parliament is substantially to the right, then the BBC sees no reason to report that section of the population which are on the left. Even if there is a huge number of people who want left-wing policies in some areas.

And this is bigger than Syria and Yemen. It affects almost all reporting. And the dominance of establishment figures in senior roles at the BBC perpetuated this slide.

Former BBC Trust head Rona Fairhead was an old ally of George Osborne and a board member of HSBC. And James Harding, the BBC’s former Director of News and Current Affairs, previously worked for the Murdoch press. While Editor of The Times newspaper, he was responsible for exposing the identity of police blogger NightJack by hacking the blogger’s email accounts – which his legal team then failed to mention during a court case against the action. Harding has also gone on the record as ‘pro Israel’.

This filters down into lower-level editorial decisions. Like in the case of Raffi Berg. In 2013, a devastating report by Electronic Intifada revealed the BBC online editor was instructing journalists to skew reports on Israel-Palestine in favour of Israel. While hundreds of Palestinians were losing their lives during Israel’s eight-day assault on the Gaza Strip in 2012, Berg was emailing journalists with ‘guidance’ to maintain a pro-Israel tone in their reports.

Editors and journalists at the BBC reading this might feel it’s unfair to single them out. They aren’t the only media outlet doing this, and they aren’t the worst. That is entirely true. But it is also entirely missing the point. It is precisely because the wider media landscape is filled with such poor reporting that the role of the BBC is so necessary. And it’s why silence is not the right course for change. As Greg Philo concludes [4.04]:

Attack, attack, attack them. Because it’s our media. We own the BBC. Get on it and insist that our views are heard.

Licence fee payers have the right to demand better, and the BBC should take the opportunity to do better.

– Support the work of Media Lens in creating a fairer media.

– If you witness inaccurate or misleading stories on the BBC, complain.