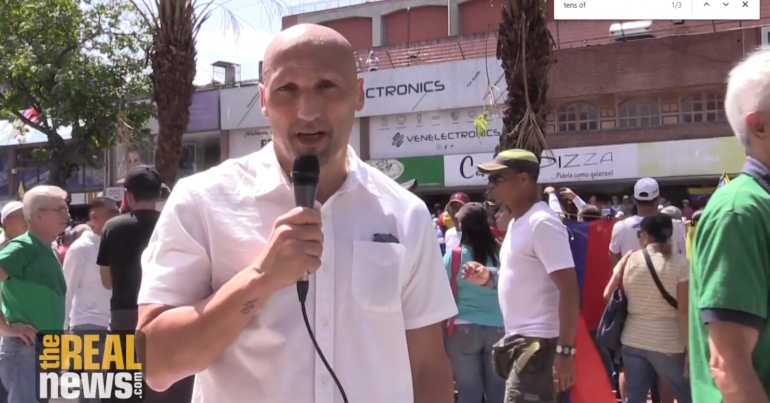 1 comment
Support us and go ad-free
On 2 February 2019, Dimitri Lascaris – a respected Canadian lawyer and journalist – covered two “massive” protests in Venezuela‘s capital city, Caracas. Lascaris reported that the anti-government protests were in an “affluent if not the most affluent part of the city”. His reporting from the capital was for the Real News Network (TRNN).

Jorge Martin, secretary of the Hands Off Venezuela campaign, has visited Venezuela annually for nearly 20 years. He previously explained that most of the opposition to Maduro is “right wing” and “based on the middle class and upper class layers” who “tend to be more white and of European [colonial] descent”; while those who “support the revolution come from working class and poor [layers] and tend to be more mixed race, black and of [Indigenous] descent”.

Significant opposition among the well off

Lascaris said that there were “at least tens of thousands” of anti-government protesters. He assessed that, “at least for the capital, Caracas, … there is a very significant degree of opposition to the government of Nicolás Maduro”.
He described the protest as “quite peaceful” and relaxed. He reported that “the opposition, led by [Western-backed and self-declared president] Juan Guaidó, has called a massive protest to continue to exert pressure upon the government of Nicolás Maduro to resign”.
Lascaris also estimated that there was an equal number of pro-government protesters:

“Absolutely no evidence” of government oppression

What is notable about this, of course, is that Western leaders have characterised Nicolás Maduro as a brutal dictator, and have accused the security forces under his command of having committed numerous atrocities against Venezuelan protesters and those who support the opposition.

I’ve seen absolutely no evidence of that here.

What minimal police or military presence he reports having seen appears to be limited to guiding car and foot traffic.

Lascaris ‘contrasted’ the minimal police presence to the over-policing he had seen in Canadian and US protests.

Lascaris then takes it home, saying:

the self-proclaimed president is openly asking the military to rebel against the elected president Nicolás Maduro, and is effectively fomenting a military coup. Despite that fact, and despite the fact that these protesters are here to show their support for that politician, who has never been elected as president of Venezuela, there’s absolutely no indication, at least at this protest, that the government seeks to suppress the right of those who are opposed to the Maduro regime to express their dissent, and even to call for the removal of the president.

This is not to say that protests in Venezuela have never turned violent. But Lascaris’s coverage is quite telling.

We could not attend the pro government rally, so we used the pictures broadcast by state TV. Had we attended it ourselves we would have relied on our own pictures. Some local sources raised questions about the authenticity of the crowd shots, hence the reference in our piece

When asked why she couldn’t attend the rally, she replied:

Were it only that simple. Both events happened at the same time in different places. Crowds made it difficult to move at all. But if you think you can be in two places at once, you might let me know how that is done.

Um, go to one and then the other? Seemingly plenty of other people have managed that.

I lived in Venezuela for two years (2005-2007) and regularly attended both anti and pro-govt marches in the same day. Very easily. I have been back on numerous occasions and have been there when both sides hold protests and have attended both. Your explanation sounds unconvincing

If nothing else, Lascaris’s brief report from Venezuela confirms Navarrete and Davies-Coates’s points.

Featured image and all other images in article via YouTube – TRNN

– Support independent journalism at The Canary if you appreciate our work, and please share our articles.

– Support independent journalism at The Real News Network if you appreciate their work.