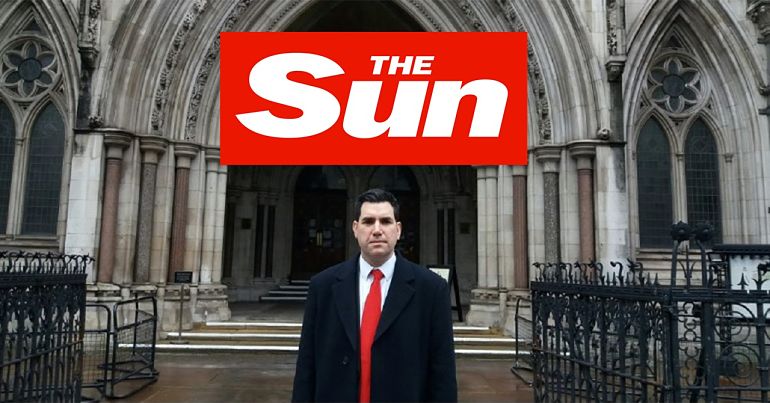 The Sun newspaper has lost a High Court battle with Labour’s Richard Burgon. The court ruled that the tabloid caused the MP significant harm by running a story claiming a band he played in “delights in Nazi symbols”. The Sun has to pay Burgon £30,000 in damages.

The tabloid’s response to the judgment was, however, even more delicious than the ruling itself.

The legal dispute was over a story the Sun ran in April 2017. It asserted that an image posted by the band Dream Troll mirrored the Nazis’ SS logo. But Burgon insists the image was a “spoof” of a Black Sabbath album. The judge ruled in favour of Burgon, who says he’ll use the £30,000 damages to help the justice system and young people:

Delighted to have won my High Court case against The Sun.

Their slur attempting to link me to “Nazi symbols" was held to be false and defamatory.

With that I'll fund a paid justice internship for a young person from Leeds. pic.twitter.com/uWlsdhSUoR

Obviously, though, the Sun wasn’t as “delighted” as Burgon with the verdict. In fact, a spokesperson said it was “deeply disappointed” and will appeal. The spokesperson then explained that it fears the decision:

This is a pretty hilarious statement from the Sun. Firstly, because it rarely holds power – such as the government – to account. It’s usually too busy holding the opposition to account instead. But also, if it’s truly concerned about the media’s “ability” to hold power to account, it’s not Burgon or the courts it should be railing against. It’s the Conservative government.

It wasn’t, for example, a high court judge who stormed into the Guardian‘s offices in 2013 and demanded it destroy hard drives. It was agents from the government’s spy agency GCHQ. These agents did so because the outlet was holding the government to account, by publishing documents Edward Snowden had given to the press detailing a US, and UK, mass surveillance regime. Nor was it Burgon who detained David Miranda, journalist Glenn Greenwald’s husband, for nine hours under terrorism legislation. Greenwald was also attempting to hold power to account, as one of the journalists Snowden entrusted with the documents.

Of course, it was also the UK government which brought us “the most extreme surveillance law ever passed in a democracy” in 2016: the Investigatory Powers Act. Meanwhile, it’s the government that withheld a record amount of official documents in 2017 that it should have released to the public. And it’s the government that’s plotting to overhaul the Official Secrets Act so whistleblowers may face over a decade in prison for daring to hold it to account.

The UK government is itself a terrible ‘brake’ on free speech and a free press. But the Sun does nothing about that. So these crocodile tears won’t wash, I’m afraid.