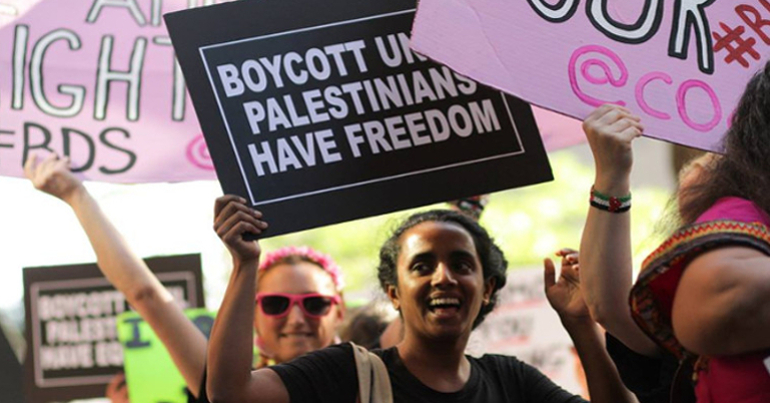 Right-wingers claimed a victory in the US Senate last night. A bill passed that aims to make it easier for public authorities to divest from organisations that support a boycott of Israel.

The bill was designed to undermine the campaign for ‘boycott, divestment and sanctions’ (BDS), against the Israeli state. It will now go to the US House of Representatives for further debate.

Omar Barghouti, co-founder of the BDS movement, told The Canary the bill was “McCarthyite”. He said:

Suppressing free speech on Palestine will only exacerbate the isolation of Israel’s far-right apartheid regime in the mainstream and grow our BDS movement for freedom, justice and equality.

The same Senate bill authorised $3.3bn of US military aid to Israel, every year for the next 10 years.

Palestinian grassroots groups made the BDS call in 2005, as a response to the Israeli military’s continued colonisation and occupation of Palestinian land, the Israeli state’s discrimination against Palestinian citizens of Israel and the denial of the rights of Palestinian refugees. Since then, BDS has become a global force to be reckoned with.

Check out the BDS movement’s top successes of 2018.

Attempt to silence the movement

The Israeli state and its supporters have been trying hard to undermine and criminalise the BDS movement. Israeli president Reuven Rivlin has branded the movement a “first-rate strategic threat”.

In 2015, the Israeli Supreme Court upheld Israel’s own anti-boycott law. Originally enacted in 2011, the law prohibits calls for a boycott of Israel and its colonies in the West Bank (known as ‘settlements’). In 2017, the Israeli state made moves to deny tax benefits to Israeli citizens donating to Amnesty International, because of the organisation’s campaign against companies working in Israeli settlements in the West Bank.

The American-Israel Public Affairs Committee (AIPAC), a powerful lobby group, represents the interests of the Israeli state in the US. AIPAC has been lobbying in support of yesterday’s anti-boycott bill.

Going from strength to strength

In summer 2018, Lana Del Rey and 19 other musicians pulled out of Israel’s Meteor music festival, after pressure from Palestine solidarity activists.

As BDS grows stronger, it’s likely that it will face increasing attempts to repress, undermine and criminalise the global movement. The intensity of the attacks against the movement is an indicator of its success.

Politicians and governments have repeatedly let down the Palestinian people. The Palestinian popular struggle’s power comes from its support. Not from politicians or states, but from ordinary people around the world.