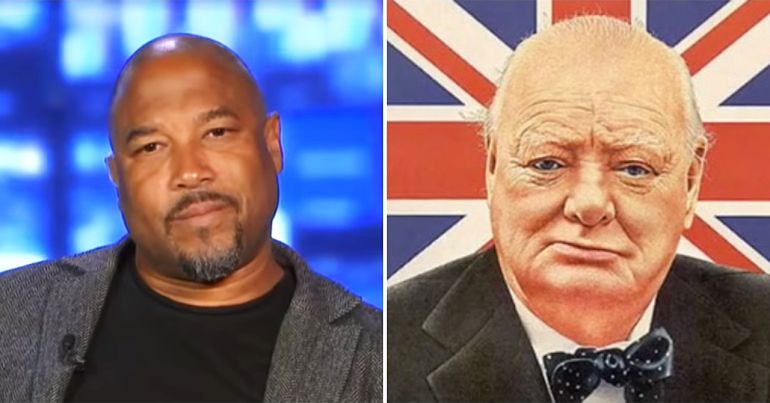 And he’s pointed out one glaring omission: why is the same media that’s keen to describe Neeson’s comments as racist so unwilling to criticise the racism of Winston Churchill?

Barnes expressed his views on the Neeson racism scandal on Sky News. And his insights are worth listening to in full:

Time to pre-heat the oven and tenderise that gammon @piersmorgan – we eating good tonightpic.twitter.com/7xvHjShzaB

John Barnes getting a lot of praise for his comments on Sky News. On calls to boycott Liam Neeson’s films and strip him of his OBE: “Let’s take down that statue of Wintson Churchill, who is a white supremacist and a mass murderer” pic.twitter.com/0SaKeCCUHo

Barnes’s remarks have exposed a common mistake in discussions of racism. And that’s the belief that racism was normal in the past, and is therefore excusable; but now, we’re expected to believe we live in a non-racist liberal society.

The above means that, in the case of Churchill, we can preserve the myth of our noble wartime hero, untainted by his well-documented racism and crimes against humanity. And in the case of addressing racism today, it allows society simply to blame individuals. This stops us acknowledging that racism is historically ingrained, and that racist power relations persist and shape individuals’ racist beliefs.

This is just the latest example of someone challenging the British elite’s cult of Churchill. Only recently, Scottish Green Party MSP Ross Greer challenged Piers Morgan and Susanna Reid over Churchill’s racist legacy:

Bizarrely, Morgan – who was so unwilling to condemn Churchill’s racism – is now taking the moral high ground to condemn Neeson while objecting to Barnes’s defence of him.

I'm also very sorry to see @officialbarnesy branding Sir Winston Churchill a 'white supremacist mass murderer.'
An absolutely disgraceful slur against the man who saved us from Hitler & the Nazis.
Shame on you, Mr Barnes.

Although he’s facing criticism, Barnes’s analysis creates a connection between racism’s past and present. The same racist ideas and power structures upheld by the likes of Churchill persist today. And until they are ended, racist incidents by individuals moulded by these racist power structures will persist.