In a spectacular c*ck up, the BBC created its very own Brexit hell - The Canary 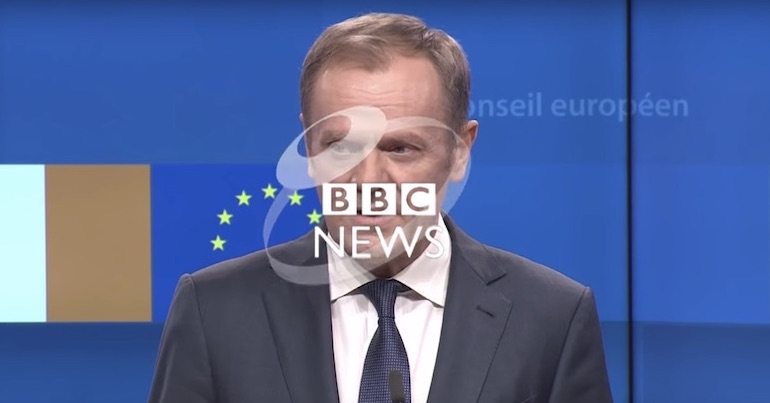 On 6 February, EU president Donald Tusk made an incredibly candid comment about Brexit. “I’ve been wondering,” he said, “what that special place in hell looks like, for those who promoted Brexit, without even a sketch of a plan how to carry it out safely”. It caused quite a stir. But the BBC crashed into another circle of hell when it misreported Tusk’s statement.

“That special place in hell”

Tusk spoke just after a meeting with Leo Varadkar, the Irish Taoiseach, in Brussels:

I've been wondering what that special place in hell looks like, for those who promoted #Brexit, without even a sketch of a plan how to carry it out safely.

But the BBC jumped on the first part of Tusk’s line with an even more provocative headline: 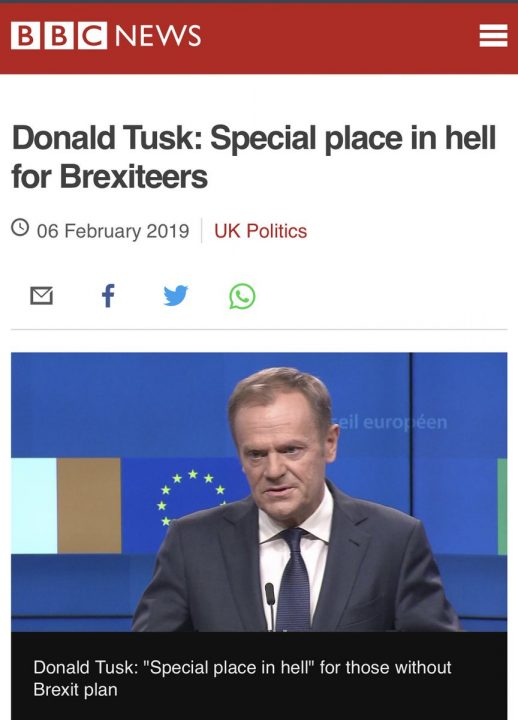 Later, it amended the headline:

Before and After: BBC on Donald Tusk pic.twitter.com/QZW0s43a52

But by then it was too late. Because the shit had well and truly hit the fan.

We’re all in it together…

Meanwhile, Conservative MP and arch-Brexiteer Peter Bone read the BBC‘s original headline out in the Commons. He called it a “completely outrageous insult”:

“I didn’t know… that he was in any sense a delicate flower.”⁰

The BBC‘s chief political correspondent Laura Kuenssberg was quick to share Bone’s comment. She had previously shared Tusk’s full remark. Yet, in her tweet about Bone, she failed to make any reference to the fact that he appeared to be responding to the BBC‘s initial headline and not the full shebang:

Nor did Kuenssberg note in the tweet that SNP MP Joanna Cherry corrected Bone and read out Tusk’s full statement. By the morning of 7 February, Nick Robinson joined the party on BBC Radio 4‘s Today show :

Um, so Nick Robinson misquoted Donald Tusk's "hell" remark this morning, hours after a fuss over the BBC's misleading headline based on having done the same (see link). Far be it for me to cry "conspiracy", but it is a bit of a head-scratcher.https://t.co/0Y8HTqAtWc pic.twitter.com/E12KH1AjTK

BBC's Nick Robinson is deliberately mischaracterising the words of @donaldtusk by omitting the caveat and declaring it an insult to all brexit voters on #r4today when the EU guy said clearly #noplanbrexit was the problem #bbcnews is a platform for Tory policy.

For many people, the way the BBC misrepresented Tusk’s quote is hugely problematic. As journalist Peter Jukes asked, “Do the errors and cockups only go one way?”

Well done, BBC, and kudos for deleting the 'special place in hell' misquotation. It could be an error – like the Spitfires accompanying May to Brussels – but is it just me? Do the errors and cockups only go one way? https://t.co/hnBcFi5HIp

Because there is a crucial distinction between the BBC‘s initial version, and what Tusk actually said.

The BBC‘s initial quote implies that he was critical of everyone who voted for Brexit. The full version, meanwhile, asks an entirely valid question about those who led a manipulative and misleading Leave campaign. It was a campaign so flawed that it not only broke electoral law, but has also provided substantial evidence to suggest the need for a criminal investigation.

And then, let’s not forget that Theresa May has handled negotiations so badly that she lost the biggest ever vote in parliamentary history. With only 50 days to go before the planned leaving date, there’s still no agreed deal and no plan.

So, some people welcomed what Tusk said:

I do enjoy it when politicians pass the "F— It Point" and stop mincing words. https://t.co/WwNzvMN5Iz

And other’s reflected on the knee jerk response of those who misled people on Brexit:

Meanwhile, as many Conservatives freaked out, one commentator offered a timely reminder of their choice words:

For the BBC to make this reporting error was bad enough. But the way it took wings and flew, with several BBC political correspondents joining in the party, is next level. The BBC has already drifted away from its supposed impartiality. Misrepresenting important statements at such a crucial time for everyone in the UK is worrying, to say the least.