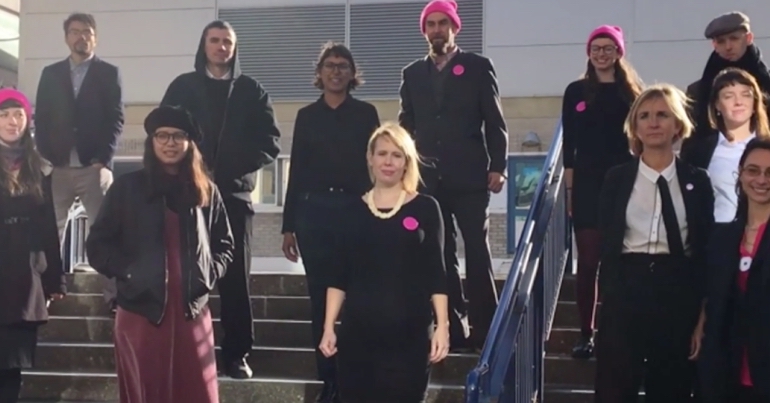 On 6 February, the ‘Stansted 15‘ appeared in court for sentencing after they were found guilty of a terrorism-related offence. They responded to a “call for help” and faced up to life imprisonment. But instead, the judge accepted the intent behind the 15’s actions. He sentenced all but one of the defendants to a 12-month community order and imposed nine-month suspended sentences on the three defendants who had previously taken similar action.

This was the reaction outside the court when supporters received news that no one was going to jail:

The moment the #Stansted15 supporters found out that 12 defendants would receive community service orders and three receive suspended sentences. NO JAIL sentences. pic.twitter.com/0mXUKuOy17

The 15 locked themselves together to prevent a chartered deportation flight taking off from London Stansted Airport. The flight was taking people to Nigeria, Ghana and Sierra Leone. At least 11 of the people due to be deported that day are still in the UK.

And on the same day as the sentencing, the real criminals in the Home Office were deporting 35 people to Jamaica.

As the defendants were preparing themselves for the possibility of prison, another charter flight has faced criticism. Many of those deported on today’s flight have been in the UK since they were children and have indefinite leave to remain. Some will leave behind children in the UK. Despite the Home Office claiming they are serious criminals, many only have convictions for minor offences.

As news of the sentences came in, those being deported were already in the air:

Labour MP David Lammy slammed the deportations in the House of Commons:

Why do you say these children should live without their parents?

Why do you say [to] the families of black British people who have been killed by your department’s incompetence that this is acceptable?…

Why is it that still, in this country, black lives matter less?

And as rapper and conscious poet Potent Whisper makes clear in his video in support of the Stansted 15, it’s the Home Office that is the real criminal for implementing its hostile environment:

Huge numbers of people turned out in solidarity with the 15:

Hundreds of people outside Chelmsford crown court today to support the #Stansted15 who are getting sentenced today pic.twitter.com/Bdi4wj7QN9

The #Stansted15 should be recognised as heroes – not jailed – for trying to stop this cruelty. https://t.co/Vvv1ta3yuQ

Solidarity with the #Stansted15 who are being sentenced today at Chelmsford Crown Court after being found guilty of terror offences for stopping a deportation charter flight.

These people are nothing less than heroes in the fight against the hostile environment.

Meanwhile, as the defendants themselves were packing for the possibility of prison, their thoughts were with the people on today’s deportation flight:

this eve I'm packing a bag for prison. have been advised it’s unlikely, but it’s possible. while I’m doing that, I’m thinking about the plane being prepared somewhere in the UK to deport people to Jamaica tomorrow, the same day we’re sentenced.

thinking about the people who will have been snatched from homes, workplaces & appointments in the days leading up to this flight, and incarcerated in detention centres without any chance to pack a bag, or say goodbye to their loved ones, like I have.

If we go down, we’ll be taken from a room full of loving people, who will be able to find out where we’ve been taken, write to us, arrange visits and phone calls, and support us as best they can until we’re released…

The 15 are also appealing their conviction. Lawyer Raj Chada, who represents 13 of the activists, called the convictions “a travesty of justice” and said:

It is our strongly held belief that charging them with this offence was an abuse of power by the attorney general and the CPS [Crown Prosecution Service]. It is only right and fitting that this wrongful conviction is overturned.

Despite the outcome, the case is far from over. The defendants will keep fighting. Not only against a charge designed to repress protest, but against the hostile environment, deportation flights, and the real criminals in the Home Office.