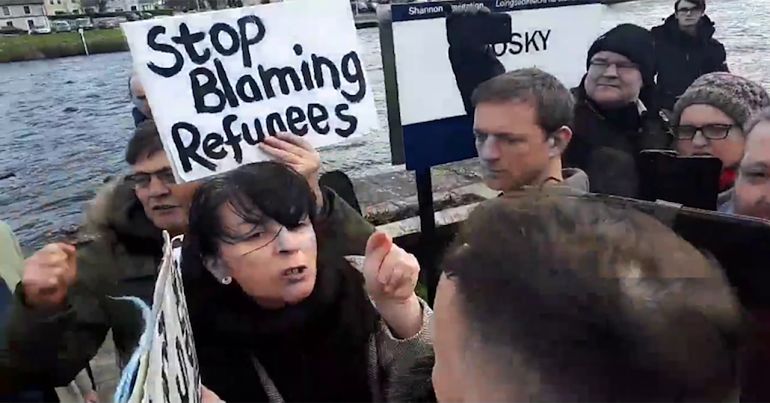 On 17 February, an anti-racist rally took place in Roosky, Co Roscommon. Leitrim and Roscommon United against Racism organised the rally. The group was responding to a suspected arson attack on a proposed direct provision centre in the village on 4 February. On its Facebook page the group said it wanted asylum seekers to know “they will be safe and welcomed.”

Roughly 30 people attended the rally in the village.

At one stage an argument broke out between an apparently local woman and a number of the activists. She told those attending to “show me proof” of an arson attack. She also accused one of the protesters of being a “troublemaker”.

Video of verbal confrontation that occurred at the start of the Rooskey protest pic.twitter.com/WFgXYUd7XH

In another video she tells people “There is nothing in Roosky” in terms of services for asylum seekers. Furthermore, she said, “We are not racist”.

A Rooskey resident says she is upset at the implication locals are racist. She said there are not the facilities and services in the town and questions why asylum seekers being accommodated there. @niallcarsonpa pic.twitter.com/Kwi1khiQbz

No to racism, live at Rooskey now. pic.twitter.com/41YKJTTuyO

A number of Irish politicians voiced their “solidarity” and “support” for the rally in a press release posted online. MEP Lynn Boylan said the rally was “an opportunity to show solidarity for asylum seekers”. She also stated:

There can be no place for racism in Ireland. As a nation we are so much better than that and we can not allow a small minority of people whip up fear, hatred and division.

Similarly, Martin Kenny, a member of the Irish parliament, said anti-immigrant views are “about getting people into the trap of hating the other, for no reason other than hatred.” Kenny also said the Irish understand why people seek asylum. He said:

As a nation who suffered the terror of war due to imperial domination and had our people scattered across the world, we understand and support the need to give refuge, protection and the chance of freedom to other people, who are now suffering the terror of war.

For him, this means:

We must never give way to hating, because hating is a trap that destroys life and freedom itself.

Presence of the Irish far right

Also at the rally was well-known Irish far-right activist, Rowan Croft. At one point protesters surrounded him and chanted “Nazi scum off our streets”. He was also called a “fascist” by one of the protesters.

There have been confrontations between local residents and anti racism protesters in Rooskey where a hotel housing asylum seekers was previously attacked. @niallcarsonpa pic.twitter.com/aBLkc53jNF

Croft recently met Matteo Salvini of Italy’s Lega party. Salvini, who is also deputy prime minister and minister of the interior, has previously said he fears an “invasion” of immigrants.

For me, the problem is the thousands of illegal immigrants stealing, raping and dealing drugs.

Croft also has a YouTube channel where he goes under the name Grand Torino. He has used the channel to host interviews with figures from the international far right.