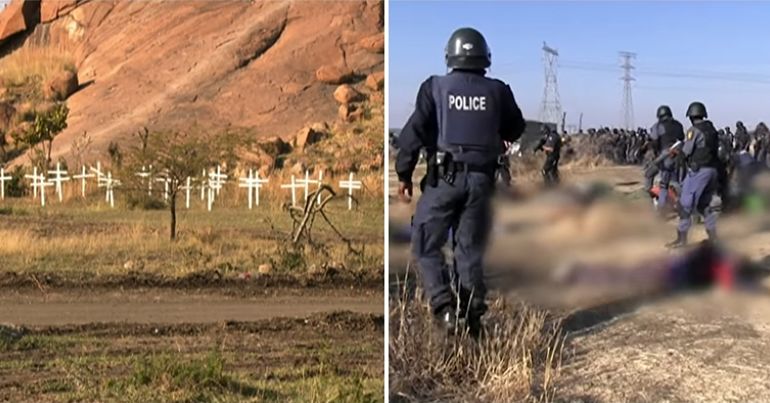 Since the police killing of George Floyd on 25 May this year, there has been a renewed focus on police brutality. So now, on the eighth anniversary of this massacre, it’s the time to deliver justice for the victims of Marikana.

Lead up to the massacre

The massacre occurred following a week of protests. On 9 August, around three thousand miners began their strike. The next day, some of those miners approached the National Union for Miners (NUM) to demand its support. However, instead of getting support from NUM, they were met with live ammunition which resulted in the deaths of two miners.

The miners didn’t get a meeting with NUM or representatives from Lonmin, which owned the mine in 2012. In fact, while the strike continued, neither NUM nor Lonmin officially dealt with the strikers’ demands. Instead strikers lost their jobs and faced even greater hostility from police, the mining company, and the trade union. But the strikers remained committed to their objectives.

In the days that followed, there was further violence as these striking miners attempted to join miners from another Lonmin mine. Those miners were also undertaking a strike.

Workers at the mine faced poor living conditions and low pay. Some workers lived in shacks built out of rusted corrugated iron and bits of timber. They had to survive on a monthly income of between £215 and £270. Some of the miners worked to send money home to their families living in other parts of South Africa. They demanded an increase to £670.

But negotiating with the company was difficult. The strikers didn’t trust NUM as they felt the union was too close to “the bosses”. As a result, management refused to negotiate with them.

In the aftermath of the police killings on 16 August, the South African government launched the Marikana Commission of Inquiry. This inquiry submitted its findings on 31 March 2015. It found “damning evidence” against the police “and that attempts were made to portray the victims as aggressors”.

The commission of inquiry also found the police’s plan on 16 August 2012 “defective”. Additionally, Channel 4 News footage shows a police officer boasting about shooting a protester. Another Channel 4 News piece reports that four mortuary vans and “4,000 extra rounds of ammunition” were ordered “just hours before the shooting.”

This news report also demonstrated that “most of the miners” were shot in the head, the back, and the back of the head. However, police maintain they acted in self-defence.

President of South Africa Cyril Ramaphosa was deputy president when the commission published its findings. However, he was on the board of Lonmin at the time of the massacre. The commission cleared him of any wrongdoing. Affected families insist the “political masters” of the police influenced their actions that day. So they demand that government officials face justice.

Furthermore, protesters claim that on the day before the massacre Ramaphosa urged ministers to take “concomitant [connected] action” against the strikers. The Canary contacted president Ramaphosa’s office for comment but it did not respond in time for publication.

Owners of the mine

The Canary contacted Sibanye-Stillwater for comment. On 14 August this year, the company hosted the ‘Inaugural Marikana Memorial Lecture’. At this lecture of “renewal, healing and hope”, CEO of Sibanye-Stillwater Neal Froneman said:

When Sibanye-Stillwater concluded the acquisition of Lonmin in 2019, we did so with our eyes wide open to the fact that this would bring with it the legacy of the 2012 Marikana tragedy. And that it would fall to us to continue the work that Lonmin management had begun, and to address and bring that tragic legacy to closure.

We recognise and respect the events of the past. We also welcome the opportunity to engage and collaborate as a stakeholder, among and with other stakeholders who were and continue to be affected. Whilst we acknowledge and respect the past, we want to develop a new legacy for Marikana; one where conflict is supplanted by new social and economic compacts. We want it to be a new, more inclusive and sustainable legacy.

During the commission’s inquiry, legal representative George Bizos compared the Marikana massacre to the Sharpeville shootings on 21 March 1960. Police shot 69 protesters dead outside Sharpeville police station who were protesting the pass laws. Marikana is the largest massacre since the ending of South Africa’s apartheid regime.

To remember this massacre, protesters are gathering outside South Africa House in London at 4pm on Sunday 16 August. They will hold a socially distanced protest to say:

the lives of African mineworkers matter

Andy Higginbottom, one of the organisers of the protest, said:

The lives of African mineworkers matter. They were killed because a British company Lonmin refused to pay them a living wage.

When we say Rhodes must fall we are thinking of his structural legacy. To this day London based mining companies and financiers are raking in profits from South Africa. To this day African women and communities are fighting dispossession of their lands. We are here today in solidarity with their social resistance.

In remembering the miners killed by the police in 2012 we are also looking forward to breaking Rhodes legacy of racism and exploitation.

With the world’s attention focused on racial inequality, police brutality, and the history of colonialism, now is the time to finally get justice for Marikana.