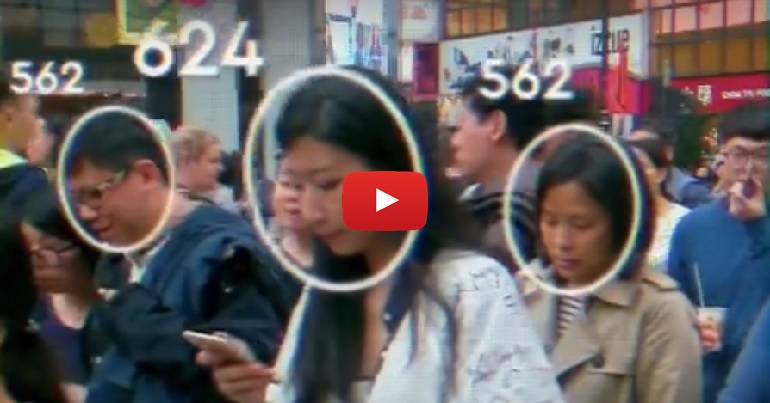 If you thought Theresa May’s surveillance state was bad, China’s on some next-level Black Mirror shit.

While the Conservative-led government has helped to make Britain one of Earth’s most advanced surveillance states, it looks like China’s taking its policy advice straight from George Orwell’s 1984.

Scanning your face and scoring your ‘trustworthiness’

One episode of the dystopian series Black Mirror shows people rating each other on an app, with their scores determining their social status. This creates a society of almost robotic compliance to the expectations and whims of others.

And that’s essentially what’s happening in China today, except with the state determining people’s scores:

Essentially, China’s ‘social credit system‘ (first proposed in 2014) sees the state using data to rank its citizens. People who score high get rewards, and people who score low get punishments. For example, getting your children into a good school or travelling on high-speed trains would all be off limits for low-scoring citizens. The government’s vision is apparently to allow the “trustworthy to roam everywhere under heaven while making it hard for the discredited to take a single step”.

All Chinese citizens will be under this scheme by 2020.

Because it’s the state that decides who is ‘untrustworthy’, some people have seemingly been blacklisted simply for accusing officials of corruption.

And even worse, some Chinese companies are undertaking similar pilot programmes with advanced technology like facial recognition. These go further than Western credit scores, basing figures on personal characteristics, relationships, and personal preferences. So if the state ends up adding such facial recognition technology to its social credit system, it would essentially have total control over its citizens.

We can trust China’s government, though, right?

Today, China is the “leading practitioner” of what sections of both the left and right call “state capitalism“. The Chinese government calls itself ‘communist‘, of course. But as Jacobin writes, “China has shown capitalism and authoritarianism are perfectly compatible, even complementary”; and the state’s increasing power is built on the “political exclusion and economic exploitation/dispossession of the working class and peasantry”.

Supporters of the Chinese government will point out that it has overseen significant social advancements. The UN, for example, has pointed out that the system helped to lift over 470 million people out of extreme poverty between 1990 and 2005. And the director-general of the World Health Organization insisted in 2016 that:

In the eyes of the world, China is increasingly seen as a model for development at many levels…

In reducing threats to health, some of China’s past achievements have been spectacular…

In other words, China’s state capitalist model is providing economic stability and statistical social advances. And it’s therefore becoming increasingly attractive to countries around the world that are struggling with both.

Don’t want the state to control you? Don’t let it happen!

With authoritarian governments like China gaining more economic success than some of the world’s most powerful ‘democratic’ governments, something clearly needs to change. In particular, we can’t let the oppressive state-capitalist system of China carry the banner for the global left.

Now is the time for democratic socialists to stand up and be counted. Indeed, as former assistant professor of finance at Stony Brook University Noah Smith wrote in 2017:

In the new system, democratic-socialist countries will face off against authoritarian state-capitalist ones.

And this prediction brings us full circle, back to the prophetic warnings of George Orwell. As a “radically antiauthoritarian democratic socialist“, Orwell warned us about many different attacks on freedom. The New York Times summarises one key message from 1984 as the state trying to “subdue its citizens into a mindless mass which executed the will of Big Brother” – very much the apparent aim of China’s social credit system. Instead of getting people’s free and informed consent to forge a stable political system, these states prefer manipulation – treating people as animals to train rather than humans to win over.

What China is doing today is a wake-up call.

In a BBC interview, George Orwell gave us a ‘final warning’. Speaking about the possibilities of a real society like the one in 1984, the writer said:

Don’t let it happen. It depends on you.

So if you don’t want to live in a place where the state gives you a score and treats you accordingly, the message is simple. Stand up and participate in the creation of an alternative – before it’s too late.

– Discuss the issues above with family members, colleagues and neighbours. And organise! Join (and participate in the activities of) a union, an activist group, and/or a political party.

– Visit Make Votes Matter to get involved in the activist-led campaign for fair votes. Also join the Electoral Reform Society. And write to your MP, asking them to support electoral reform (and a progressive alliance in the meantime).

– Join The Canary, so we can keep holding anti-democratic elites to account. And support other independent media outlets, such as: