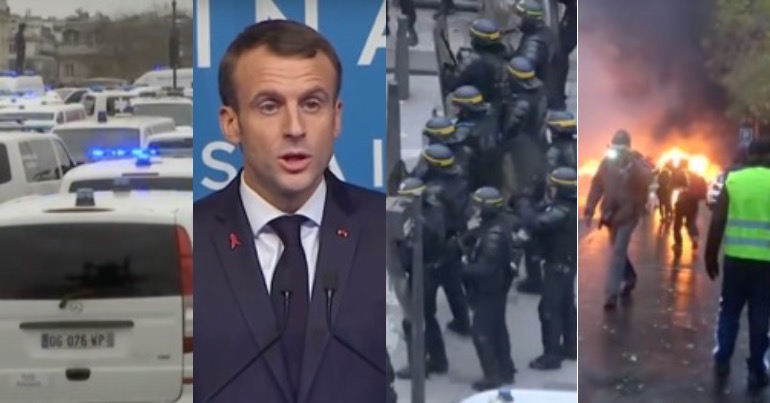 France is experiencing its worst civil unrest for generations as the so-called ‘yellow vests’ (“gilets jaunes“) protest against the government and face off against the police.

But now, videos are emerging that suggest the French government is losing the respect of public sector workers; perhaps even the police.

What began as a protest against increases in fuel taxes has now evolved into an outpouring of rage against the French state and its economic system; in particular, the high cost of living and President Emmanuel Macron’s pro-business, pro-rich policies.

The protesters are calling for the government to resign and have cancelled meetings with the French prime minister (a lesser position to that held by Macron).

There appear to be numerous signs that the authority of the president over the pillars of government is dying, fast.

Back in July 2017, then head of the French armed forces Gen Pierre de Villiers quit due to budget cuts.

And now, during the protests, evidence is emerging of further elements of the French state in open rebellion.

Below, you can see ambulance drivers creating a blockade, angry with changes to their working conditions:

🆘‼😬🚑 #France: Now also the ambulance crews have entered in the protest against oppressor Macron! pic.twitter.com/m55VlCy08V

And this is leading to bizarre clashes between state workers:

Firefighters turning their backs on the ruling class

Elsewhere in the country, firefighters are showing their disapproval of authorities for staff cuts in dramatic ways, including turning their backs on state officials:

This could prove particularly problematic considering the number of fires occurring due to the civil unrest.

Losing the support of the police?

The police are the enforcers of government power. As the Centre for Crime and Justice Studies has argued:

the modern state is defined by its ability to resort to physical force.

But worryingly for Macron, despite safeguarding police funding when committing to public spending cuts, there are indications that some protest police aren’t committed to defending the government.

Examples of the police appearing to show solidarity with the protesters, for example, are now circulating on social media:

The French police show solidarity in the conflict with ambulance demonstrators and leave the Place de Concorde in #Paris. Via @StrategicNews1 pic.twitter.com/nIKVTYHMBX

This might just be a police de-escalation tactic, of course, rather than a display of support. But given hostility elsewhere, it is nonetheless welcome.

Signs of apparent solidarity shouldn’t detract from the many instances of police violence. Because as the BBC reported, an 80-year-old woman was killed when struck by a police gas canister when closing her shutters. And this is in addition to three other protesters killed since violence erupted more than two weeks ago.

Other examples of violence have also been documented online:

Protesters haven’t been afraid to defend themselves, though:

Police forces are using rubber bullets against the #YellowVests pic.twitter.com/xzqb95BvW5

What is obvious from social media is that both the right and left of French politics regard this as an opportune political moment. As the BBC reported, citing French left-wing newspaper Libération, the protesters are diverse – from anarchists on one end of the spectrum to far-right students on the other end.

The dangers of the far right seeking to exploit the situation are real. Xenophobic hard-right leader Marine Le Pen has warned that Macron could order police to open fire on French citizens, possibly indicating an opportunistic desire to capitalise on public anger should any extreme violence transpire.

This has lead some in the yellow-vest movement to call for a broad left-wing participation in the protests as a means of stemming a far-right co-option.

But irrespective of the left or right, journalist Glenn Greenwald sums up what is occurring in France perfectly:

Macron is the embodiment of neoliberalism and corporatism & he's become hated in a short time. These protests are teaching the same lessons as so many other countries: what's being rejected (& supported) is not one party or ideology but the ruling class: https://t.co/Cl64QaDCjS pic.twitter.com/FhLzO4zphM

As the French state unravels and haemorrhages support from public servants, the battle for the soul of the country could be about to begin.

And as protests spread from France into Belgium, could popular revolt spread further across Europe?