Two prison guards beat up a teenage inmate, but that's just the tip of the iceberg for children in prison - Canary 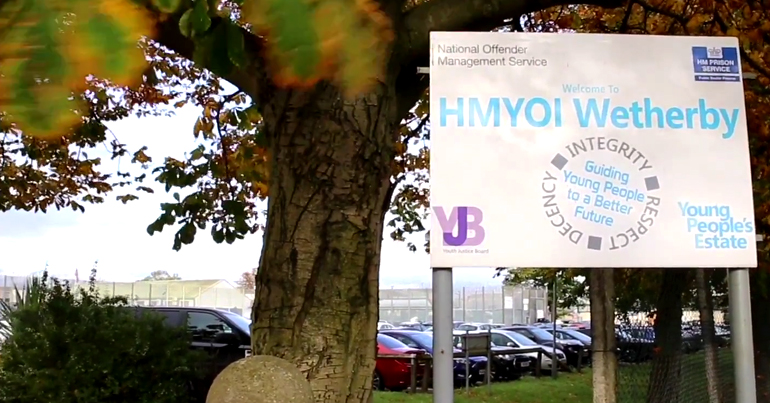 The “punishment beating” of a 17-year old inmate has landed two prison guards in jail. But far from exceptional, this only reflects the daily violence faced by youth in prisons.

The court case revealed the inmate was initially restrained for “assaulting” a third, unnamed prison guard. But Burnett and Scott then took the teenager out of sight of cameras. Then, the Yorkshire Post said:

Burnett then delivered a series of punches and upper cuts to the teenager’s face as his arms were held. Scott joined in the attack and threw punches. The violence ended when other prison officers went to protect the inmate.

As a result, the 17-year old was left “gurgling” blood. The BBC reported the teenager went to hospital for a “suspected fracture of the nose and severe bruising”. The Yorkshire Post also said the guards tried covering their tracks following the beating.

When passing the sentences, recorder Ben Nolan described the attack as a “frenzy of violence” and ‘downright brutality’.

This extreme violence is far from unusual for children in prisons. A freedom of information request from Cardiff University revealed in November a “disturbing extent” of self-harm and violence across the youth prison estate.

The report detailed figures on the rate of self-harm and violent incidents recorded in 2017 across England and Wales’ five under-18 YOIs: 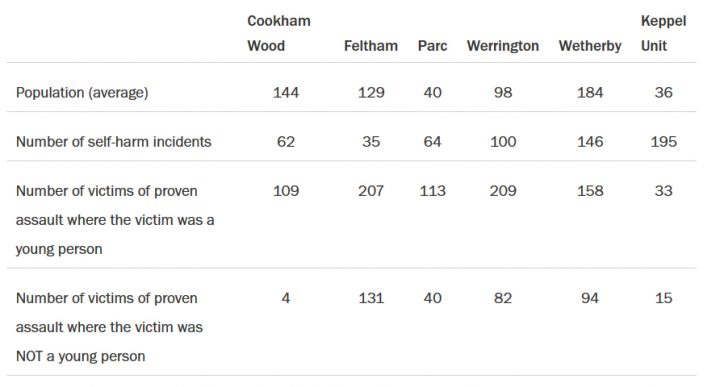 State-run Wetherby YOI’s 184 child inmates experienced 146 incidents of self-harm. They were also on the receiving end of 158 incidents of “proven assault”, though there’s no detail on who committed those assaults. As a rate per 100, that’s 79.3 and 85.9 respectively.

These numbers don’t top the chart, though. The G4S-run Parc YOI in Wales recorded 160 incidents of self-harm per 100 and 282.5 proven assaults. There were 102 and 213.3 incidents respectively at state-run Werrington YOI. Keppel Unit shows abnormally high rates of self-harm at 542 per 100, but is a unit for high-dependency children.

Commenting on the report to the BBC, Andrew Neilson of prison reform charity The Howard League said:

Children and young adults (some YOIs hold people up to age 21) don’t only face acts of overt violence in prison. In November 2017, the government’s own prison inspector said it found “far too many boys” were locked up in cells for more than 22 hours a day. This led to senior medical bodies calling for an end to solitary confinement. An October 2018 report by the Children’s Commissioner suggests the practice continues. It said there have been reports of children spending “up to 23.5 hours” in segregated cells “for days and sometimes weeks on end”.

Meanwhile, a 2016 report by prison inspectors focused on the problem of food in YOIs. It said letters from people inside youth jails described food regularly running out or portion sizes being too small. The inspectors directly received complaints about uncooked or undercooked meals. It concluded these were leading to a loss of dignity amongst inmates and concerns for “prisoner and staff safety”.

The environment reflected in these reports and figures has led to widespread drug use. User Voice, a charity run by ex-prisoners, found that 85% of children in prisons they’d spoken to had taken drugs. It quoted one such child as saying drug use is “to suppress feelings and escape the world”.

Jake Hardy killed himself at Hindley YOI in 2012. He was 17-years old at the time. It happened after bullying by prison staff and other inmates.

Consequently, Hardy’s mum, Liz, helped start the End Child Imprisonment campaign. It was launched on 22 November and is supported by human and prisoner rights groups including Article 39, The Howard League, INQUEST and the Centre for Crime and Justice Studies. The campaign’s goal is to “press for closure of England’s child prisons”.

Youth justice statistics for 2016/7 show 42.2% reoffended again within a year. Like adult prisons, YOIs’ impact on changing behaviour seems very low. It’s also worth noting that 45% of youth in custody identify as coming from Black Asian and Minority Ethnic backgrounds.

Burnett and Scott’s assault at Wetherby YOI is despicable. But it’s wrong to view the brutal attack as an isolated incident. The data shows children are going through hellish environments of stress, fear and violence on a daily basis. This isn’t something that can be reformed. We must get all children out of prisons now.