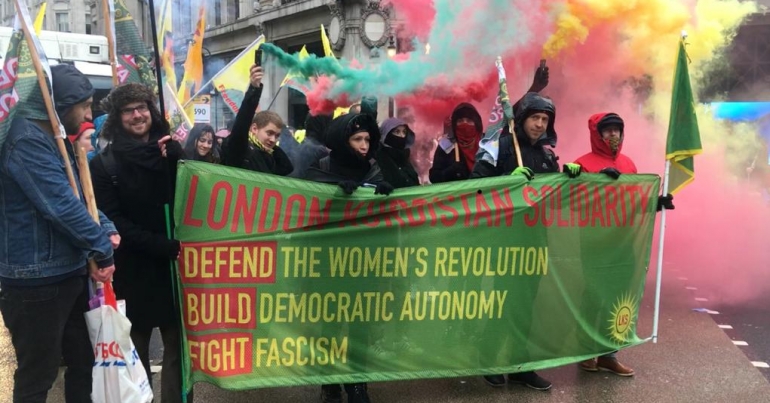 As part of an organised push for solidarity on 27 and 28 January, people around the world came out to support the progressive revolution of Rojava in northern Syria. This was especially important because NATO ally Turkey is currently threatening to invade these communities.

The YPG (People’s Protection Units) and YPJ (Women’s Protection Units) are Kurdish-led organisations made up primarily of northern Syrian residents. But numerous supporters of the left-wing revolution have come from around the world to support these militias’ efforts to defeat Daesh (Isis/Isil) and build an alternative future in the middle of the devastating Syrian conflict. And recently, the YPG International division put out a call for two “global days of action on 27 and 28 January” in defence of the revolution in Rojava (officially the Democratic Federation of Northern Syria). Its statement said:

The Revolution of Rojava and the political project of the Democratic Federation Northern-Syria are an attempt to protect the peoples of the region, guide a way out of the apparent dead end of never ending crisis, war, destruction and oppression from several sides and builds up peaceful and dignified life for the people and society.

People from around the world answered this call for solidarity. There were marches, protests, and numerous events in cities including London, Berlin, New York City, the Basque country in Spain, Dublin, Sydney, San Francisco and beyond.

People are sharing images of these solidarity events under the hashtag #RiseUp4Rojava:

#riseup4rojava Greetings from Euskal Herria Basque Country.
Solidarity against the threats of invasion of Erdogan and the Turkish state. We denounce the production of arms and the export to Turkey, because the #warstartshere. Solidarity with the activists on hunger strike. pic.twitter.com/EmXiHDmh1D

A sports club in Dublin showed its solidarity:

#RiseUp4Rojava Solidarity with #LeylaGüven
As part of the global days of action on 27.01.2019 the JXK & YXK Frankfurt a.M. in Frankfurt (Germany) has protests in the #FFM Central-Station against the fascist Erdogan regime. pic.twitter.com/o63tTUZH2f

There was also a bit of night-time guerrilla solidarity in Connecticut, USA:

From here in the Elm City, we stand in solidarity with our comrades on the front lines in Rojava. Smash Erdogan. Smash Assad. Smash Pompeo, Trump, and all imperialist scum. They will never snuff out the flame of revolution! #RiseUp4Rojava pic.twitter.com/QN0bOJQ53k

And many people in the ecological movement have joined the actions.

Syrian Kurds have been leading a revolutionary experiment in direct democracy in Rojava since 2012. The process is based on the philosophy of imprisoned Kurdish political leader Abdullah Öcalan, known as Democratic Confederalism. This ideology rejects nationalism and the nation-state in favour of a feminist, grassroots, direct democracy. It’s also driven by the need for environmental sustainability. It is a form of libertarian socialism known as libertarian municipalism, as articulated by late US social-ecologist Murray Bookchin. The corporate and establishment press gave the Kurds, and especially Kurdish women fighters, some attention in 2014-2015 as they fought Daesh in Kobanî. But there’s been little focus on the ideology and philosophy that has galvanised people in northern Syria; possibly because forces in Rojava never sought to violently overthrow the Syrian government.

On 20 January, 14 British trade unions held a solidarity event at London’s City Hall calling for the release of Öcalan from a Turkish jail. The mayor’s office of Sadiq Khan reportedly pressurised the organisers of the event to stop it from happening. London Assembly member Unmesh Desai told the Morning Star that:

after refusing to cancel the trade union-backed event… he was told he was being investigated for “breach of anti-terror legislation” for hosting the meeting.

Öcalan co-founded the Kurdistan Workers’ Party (PKK) in Turkey. It fought intensely against the Turkish state throughout the 1980s and 90s. Turkey calls it a terrorist organisation, and Ankara’s NATO allies (including the UK) ultimately followed suit in 2001. After Öcalan’s arrest in 1999, the PKK’s ideology shifted. It soon adopted the philosophy of Democratic Confederalism. So today, it strives for local, direct-democratic autonomy within Turkey (as its sister organisations do in Rojava and beyond). The Canary revealed in 2018 that an official ‘Counter Terrorism Policing’ document in the UK placed anti-fascists, animal rights activists, and Kurdish groups (including the YPG and PKK) alongside neo-Nazi organisations and right-wing Islamist groups such as Daesh.

The Turkish invasion of Afrin

Turkey and its allied Free Syrian Army rebel forces invaded the Rojavan region of Afrin in January 2018 and sacked Afrin city. As The Canary previously reported:

Turkey has long supported the… Free Syrian Army (FSA). In January [2018], FSA rebels allied with the invading Turkish army to ethnically cleanse Afrin of its Syrian Kurdish population, and remove the Kurdish-led democratic government established there.

Afrin was home to a couple hundred thousand refugees and among the most peaceful places in the region. Demonstrators called out what they saw as the BBC‘s complicity in the invasion due to its distorted coverage of the events in May 2018.

The YPG/YPJ-led Syrian Democratic Forces (SDF) left Afrin to avoid further bloodshed as the Turkish army poured in with German manufactured tanks and US- and British-supplied weaponry. However, the SDF has initiated a guerrilla war against the occupying Turkish army and the Islamist gangs it backs (which are accused of continued war crimes in the city).

The invasion and occupation of the Kurdish canton Afrin by the Turkish army and Turkish backed Islamist gangs in the beginning of 2018 was the start of an already long-planned aggressive offensive against the Kurdish revolutionary movement on Northern-Syrian territory.

The silence of the international states was in the face of the occupation and their crimes against the Kurdish population and violations against human rights laws in Afrin a very loud one. Tight economic relations with Turkey, especially weapon deals, made these states supporters and profiteers of this war. It showed that we can only rely on our own forces and our own strength.

YPG International also called for “creative actions” to “interrupt the production and export of arms, and the daily life of the political parties responsible for the deals with the Turkish regime”. There was a demonstration outside of BAE Systems in London on 28 January. 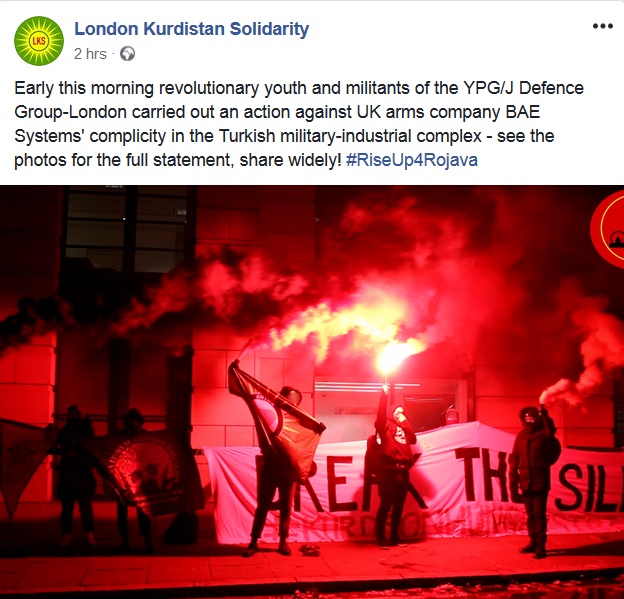 Men and women from around the world have shown the people in Rojava that they are not alone. Let’s join them, and demand that UK arms sales to Turkey stop – immediately.

Featured image via Nick MacWilliam with thanks