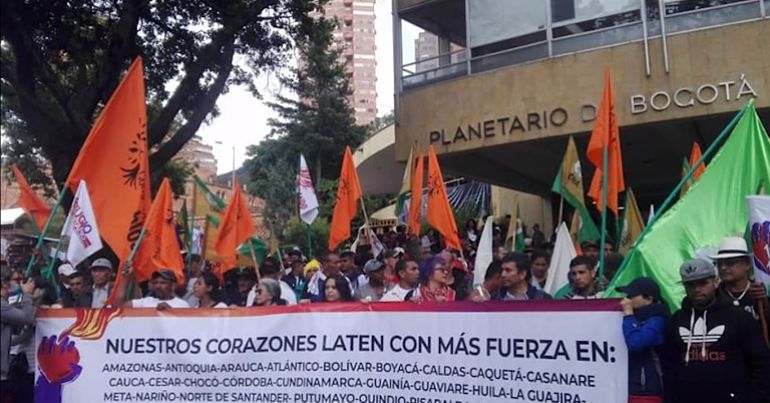 On 28 and 29 April, thousands of social organisers joined together in Colombia to protest its shocking human rights record; specifically in relation to intensifying killings of social leaders. The protesters have targeted various embassies – largely in the country’s capital, Bogotá – in an effort to attract international attention to the spiralling crisis. The protests are named ‘humanitarian refuge for the life of social leaders’, and are expected to continue through the coming days.

Colombia’s history is rife with violence. But 2018 was reportedly “one of the worst years for Colombia’s social leaders”. And figures from the first quarter of 2019 suggest killings of social leaders are “increasing exponentially”.

The primary aggressors against social leaders are Colombia’s paramilitary groups, which have historic links with the Colombian state, foreign multinationals, drug traffickers, and local elites.

Human rights group Somos Defensores claimed Colombian president Iván Duque, who was elected in June 2018, is not doing enough to confront the problem:

the current government of Ivan Duque has opted to oppose its duty to provide guarantees and has left aside the difficult situation that defenders are going through; dedicating its efforts instead to putting other issues at the center.

Indeed, this crisis has severely worsened since his election. At the beginning of 2019, Duque shockingly claimed:

I can’t guarantee the lives of all social leaders in Colombia, because there are too many of them.

And in typical Colombian fashion, virtually nobody is being held responsible for these crimes. As human rights group ABColombia noted in February 2019:

The number of defenders killed continues to rise and the extremely high levels of impunity for this crime has meant that there is little to deter the authors and perpetrators of these crimes.

On 28 April, Bogotá’s bullfighting ring was transformed into a massive humanitarian refuge for social leaders who had made the journey to the capital:

Many prominent international activists, meanwhile, joined Colombian organisers in their call for the right to security. Journalist Ben Norton, for example, was on the streets:

I'm here in Bogotá, Colombia reporting on #RefugioPorLaVida, an event bringing thousands of activists across the country to demand that the government stop state-linked paramilitary killings.

Activists from across Colombia have gathered in the capital Bogotá for #RefugioPorLaVida, calling for an end to death squads and paramilitary murders of activists.

Today they protested in numerous places, including the EU office here.

Must be our #Revolution there is music and dancing. #Refugioporlavida. Thousands of social leaders arrive in Bogota to report the genocide of social leaders in Colombia and demand the Government follow through with the peace agreement. #paz #peace pic.twitter.com/uaRZmJonKV

In US we only hear about Venezuela crisis, but I’m in Colombia and learned that in 2018 alone, 255 social movement leaders were murdered!!! #RefugioPorLaVida #RefugioHumanitario

Colombia has gradually drifted out of the news since the end of a peace agreement between the FARC (formerly the country’s largest guerrilla insurgency) and the Colombian state in 2016. Peace in Colombia, commentators suggested, was “within touching distance”. Indeed, former president Juan Manuel Santos was awarded the 2016 Nobel Peace Prize for his part in brokering the deal.

The Colombian government, however, has failed to resolve key socio-economic issues that can also be found at the roots of Colombia’s civil war. Moreover, the killing of social leaders reflects a pattern of political violence that the US has been exporting to Latin American countries for decades. Indeed, the destruction of social organisations has clear benefits for private capital.

It is therefore not surprising that there is no clear political determination in Colombia, a key US ally which has long been home to one of the world’s biggest humanitarian crises, to address what Colombian social leaders are calling “genocide”.

The reality of political violence in Colombia goes a large way to explaining why the corporate media mentions it so rarely. Since it benefits Western multinationals and is waged largely against poor Colombians, this humanitarian crisis simply does not register on the media’s map. (Contrast that with Venezuela: would the media be so interested in its people’s wellbeing were the US not orchestrating a coup there?)

The situation in Colombia is drastic. But by showing solidarity with the protesters, and embracing a serious analysis of political violence in the country, we can all be part of the solution.