Jacob Rees-Mogg ‘had no idea’ about the border in Ireland, according to former Irish prime minister - The Canary 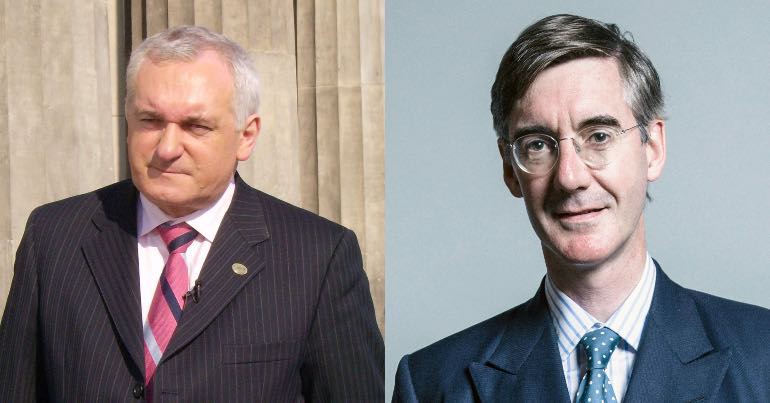 Former Irish prime minister Bertie Ahern has said British MP Jacob Rees-Mogg doesn’t understand the Irish border. Ahern was speaking at a Women in Media conference when he made the comments. He has previously appeared at committees in Westminster where he has discussed Ireland and Brexit. At one such committee, he said Brexit had “raised tensions” in Ireland.

But Ahern highlighted Rees-Mogg’s apparent lack of understanding of Ireland and Brexit, saying:

he admitted to me he had no idea of what the border was.

Rees-Mogg claims this is “untrue”, insisting that he has “never had a private conversation with Mr Ahern”.

Moreover, Ahern thinks some British politicians believe the Irish border is something with “a gate on it”. He said that “they just didn’t know” the extent of it. Considering that a “lot of these guys went to Oxford, Cambridge and Eton”, he said, “they’re not very bright”.

He also pointed out that many British politicians have used the backstop as an excuse to “have a go” at Ireland.

Ahern was Irish prime minister from 1997 to 2008. He resigned following allegations of financial corruption (which he has long denied).

Rees-Mogg, who is chair of the European Research Group, has previously commented that:

If we leave without a deal, the main culprit will be the obdurate Irish Government’s threats about the phantom Border issue.

He has also criticised Theresa May’s attempt to find a solution to Brexit by working with Jeremy Corbyn, saying:

People did not vote for a Corbyn-May coalition Government.

And he has argued that Britain should “be as difficult as possible” with the EU if May delays Brexit. He wrote that:

We could veto any increase in the budget, obstruct the putative EU army and block Mr Macron’s integrationist schemes.